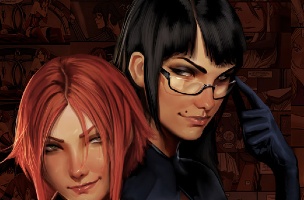 A bit of a disclaimer before getting to the juicy stuff, if you are uncomfortable with bondage or lesbians you have hit on the wrong post to read. Now that that’s over with, back on topic.

Since coming to college I have been shown and dragged to many things. One of these things being a bondage panel at an anime convention (basically a weekend where nerds take over a conference building and talk and sell anime, cartoons, comics, and other types nerdy things) two years ago. In this panel I was introduced to the comic known as Sunstone.

Unlike one would want to believe, the story itself is really good revolving around to very likable and relatable characters. Ally, the dom, is a business woman who is creative and fun person that take safety and enjoyment very seriously. While Lisa, the sub, is a writer of fantasy novels and some more explicit fiction online who is more shy, witty, and the stories narrator. Their relationship starts around both of their fetish of the fantasy that is created in BDSM, in this case it has been agreed by both parties and is only a part time persona that is created by the fantasy, though neither are disillusioned for it to take over their lives.

I would also like to point out the art in this comic is beautiful. In the image above the panels in the shape of a corset that is tightening on the bottom with the two characters being entangled is a wonderful way to show their coming together for their first face to face meeting which is where the first volume starts the present story from with narrations of a future Lisa. The colors in the back ground are usually between reds and golds which highlight more of the mature theme.

In the second volume some of the danger of bondage are addressed. I have to say that not many things I have ever seen comic wise about bondage have ever really pointed out some of the negative sides that can come out of this fetish. It comes in the form of a woman the Ally used to know, who was in a relationship with a friend of hers that was also in the bondage community. There had been a demonstration at a meeting and the woman shot off from there. It began to take over her life to the point that she wanted to be in the fantasy 24/7.

When the woman is alone she tries to prove that it can be done a retrains herself to a bed, but ends up with no way of getting out until someone comes to find her while the ropes slowly started to cut off more circulation to her hands the more she struggled. This is a very real danger in dealing with BDSM and more specifically bondage. It is because of that it is suggested to not do these things alone or at least things that could cause injury. One of the things that I learned from the panel was that a knife is always kept in case of emergency so that ropes and the like can be cut off for safety reasons.

It is not only the story that is interesting, but the pages and panels themselves.

In this image there are three things that stand out the most that are carried throughout the series. First is multiple side by side panels that have what Lisa and Ally are doing in different places before they go meet up with each other. The similarities to real people’s personas can be seen in their dialogue that the talk line leading to the speech bubbles can change according to their moods and tones they are trying to convey.

Secondly to note is the facial expressions. The facial expressions in this scene really highlight on their mood and show that both of them are nervous no matter what their role my be. It makes such a human quality it is hard not to get swept away into the story. And Lastly is the color that is done throughout the page. There are a lot of warm colors mixed with black. Sunstone is completely done in color and done very realistically at that. All the colors feel very real, even in the backgrounds when done in a fantasy like sequence the colors are there to illustrate emotions and emphasize the characters relationship.

If you are interested in Sunstone, here is a link to an online version of the series.