After a few months of studying graphic novels I feel as if I have obtained some knowledge on the subject which is something I am enthusiastic about considering I didn’t read too many comics prior to this class. When thinking of what graphic novel I wanted to write my second blog post about, my first thought was, This One Summer, particularly a certain theme in novel. Sluts. This word is tossed around quite freely in this novel and mostly by Rose. As a woman who has had to deal with this word on countless occasions I felt truly compelled to have my say.

The first time Rose uses this word is when she and Windy were coming back from the convenient store where they pass by some local teenagers. Dunc is the teenager who works at the convenient store and who happens to be the crush of Rose. While Rose and Windy pass them by they observe how the teenagers interact with each other. In a word, they are disgusting. The male friend of Dunc calls Sarah a slut as he lifts her up and slaps her behind. Jenny calls him an asshole and they all just behave like teenagers do. From what I remember in high school and from what the comic is displaying, teenage boys degrade and objectify women and teenage girls want everyone’s attention and approval and do whatever they can to obtain it. Teenagers are vile and I think everyone can attest to that in some manner. Rose observes this behavior and like all preteens she strives to be cool like the older kids which further influences her behavior. Windy and Rose begin to innocently make fun of the girls and then Rose drops the slut bomb.
This part of the comic was so important to me as an audience member and woman. There was some point in my life where I called another girl a slut. Today women stand with other women to abolish slut shaming, we encourage other women to live life as they like it without any judgment from women or men for that matter. But as a part of growing up there were plenty of times where I said something horribly sexist to fit in. What does this say about the generation I grew up with? I had to call a girl a slut to get laughs from my friends or to make it seem like I was more mature because I was using such a strong word? However if a guy called a girl this word though it often had a sickly positive context because that would mean that she was “easy” which made her popular with other guys. But there was nothing worse than when a girl would call another girl a slut, those were fighting and heartbreaking words. That is where the word really means something. Another girl looking down on you and judging you for choices you have made.

On pages 240-241 you can see how uncomfortable Windy is when Rose talks about Jenny and her pregnancy situation. A while back in the novel Rose witnessed Sarah hugging a guy and started making claims how Jenny was a slut for supposedly cheating on Dunc with the guy she was hugging. Windy came to Jenny’s defense by saying that Jenny looked genuinely upset and it could have been anybody that she was hugging. Rose fires back by calling Jenny as slut again. 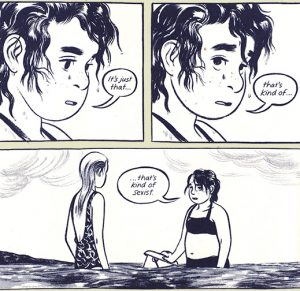 Windy tentatively calls Rose out on her sexist views. We learn here that although Windy is younger and more hyper than Rose she is actually the more aware and mature of the two even though Rose throughout the whole story has been trying to show just how mature she is.

I hope more young girls read this coming of age story. Growing up today is hard because of words like slut. Women verbally abusing other women doesn’t help us move any farther up. It’s really just hurting someone. Another blog post about This One Summer is called Different Paces and Stages talking about friendship as an occurring theme throughout the comic .This was truly a beautiful story, my favorite we have read the entire semester.