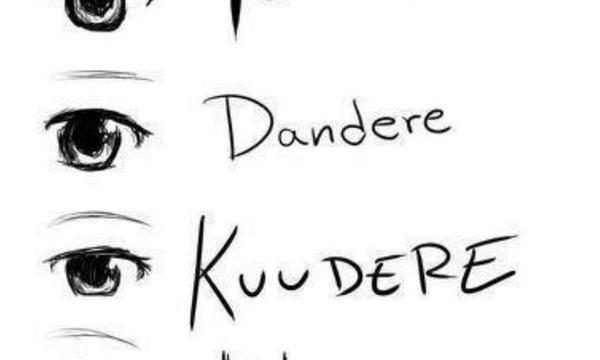 In manga and Japanese film, the term “-dere” refers to a specific character archetype or personality type. Although it’s not required that you know which character in your novel falls under which archetype, it’s still fun to know. There are four widely known types, which I have marked with an *. The others are still pretty common, and you have a good chance of running into at least one in most series.

Bakadere – The Bakadere (ばかデレ) type refers to a character who is very clumsy/klutzy and straight up stupid. Like, completely lacking any and all common sense. They’re innocent and clueless enough to be cute, and are generally sweet people but their stupidity outshines any redeeming qualities.

**Dandere – The Dandere (だんデレ) type refers to a character who is often silent and to themselves. Almost always the shy and quiet type, appearing distant, harmless and antisocial to others. However, when alone with their love interest, true feelings are often shown and they are able to express themselves. They will go to extreme lengths without a second thought to protect their loved ones.

Deredere – The Deredere (デレデレ) type refers to a character who is nothing but kind, happy, and energetic literally all the time. Spastic almost, but not so much that its annoying. No matter what happens good or bad, and regardless of the consequences they always just go back to their normal cheerful self’s like nothing happened. Arguably the most hyper, and loving of the archetypes. They’re like little pick me ups, or cheerleaders. When a love interest is around, they quite literally “smother” them with affection. Typically their actions are centered around the person they admire.

Himedere – The Himedere (ひめデレ) type refers to a character who just wants to be treated like a princess, regardless of her actual royal or financial status. They typically talk down to those around them in a very demanding voice, as if they are better than the world. 90% of the time they act super stuck up, usually to hide some kind of insecurity.

Kamidere – The Kamidere (かみデレ) type refers to a character with a god complex.  Arrogant, extremely proud, egotistical, and ready to show everyone they know best. They truly do think they know everything, and nobody can convince them otherwise. They quite literally view themselves as divine and suggest others talk to them as such. Very conceited and vain.

Kanedere – The Kanedere (かねデレ) type refers to anime gold diggers! They don’t care about anything but money and status and will marry or date the ugliest dude in the universe if he can give it to her.

**Kuudere – The Kuudere (クーデレ) type refers to a character who is often cold, distant, blunt, and lifeless. They appear like emotionless dolls on the outside but they are generally caring individuals and will go to extreme lengths to protect those they love, even if it means sacrificing themselves to do so. On rare occasions do they speak, but when they do its often lacking tact, and is rather cynical and icy in nature. Blank faces and a monotone are common. They are usually not very expressive but they do have a soft spot for the person they care about most.

Mayadere – The Mayadere (まやデレ) type refers to a character who is often a dangerous antagonist of a series, but switches sides after falling in love with another character. In some instances even though they switched sides, they would not hesitate to kill their lover if they felt betrayed in any way. Esdeath from Akame Ga Kill is a prime example of this.

**Tsundere – The Tsundere (ツンデレ) type is definitely the most popular and by far the most used character type in manga. I’m sure most have atleast heard the term before, even if out of context. Tsunderes typically treat the one they love poorly, usually because they either initially hate them and then fall in love gradually as the novel goes on, or they just dont know how to act around them. Often times, when complimented they get really flustered and punch the one who gave the compliment and call them an idiot. The word baka is used extensively. There are actually two types of Tsunderes. Type A are usually verbally abusive, get embarrassed easily, and call people stupid a lot. They are off-putting until their crush breaks down their guard. Then their true, kindhearted nature is exposed. Type B have a friendly outward appearance and are caring towards everyone EXCEPT their love interest because they don’t know how to express their feelings towards them properly. They often blush and run away when they cant figure out what to say. Cold and pompous on the outside, warm and lovey dovey on the inside.

**Yandere – The Yandere (ヤンデレ) type refers to a character who starts out nice, sweet, gentle, and kind but eventually becomes psychotic, dark, and obsessive over their love interest. They quite literally become stalkers and would go so far as to murder or kidnap anyone who gets in the way. They’re either too shy to talk to their crush, or would do anything for their affection…one extreme or the other. Usually a romantic bond with the main character forms very early, unbeknownst to him that is. Their cheerful and playful demeanor masks a sick and twisted dark side though. These types of characters are very possessive and controlling. They want to be the only one in their crushes eyes…and life. They do not take rejection well, even though that’s a pretty common trope so it happens all the time. The name literally means to be sick emotionally, if that’s insightful.

Hopefully this article was insightful, if anyone’s curious to see which “-Dere” you would would fall under, you can take a quiz here!