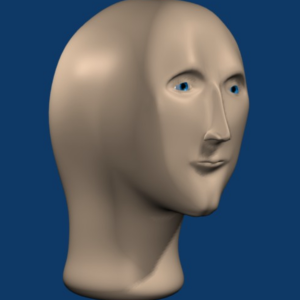 This is the meme man. Often seen online in multiple deranged memes, he is nothing more than a poorly rendered image of a 3-D head. In terms of memes though, not many people are aware of his origin, and don’t know that he is actually from a series of short comic strips. The comic strips began in 2004 and started out as just a singular image as seen above. The meme man was nothing more than this poorly rendered image until one fateful day, a user from 4chan photo shopped this model into a short comic. 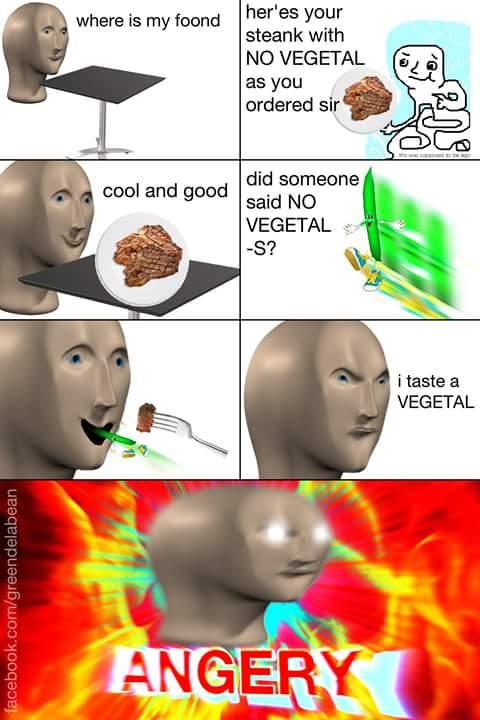 The obscurity and ridiculousness of this comic is what began Meme Man’s ascension into the Olympus of Memes. People began to take this model and photo-shopped it in various different ways but oddly enough, there was always a rule to follow. It had to make no sense, and most of the words had to be spelled incorrectly. Now at this point you may be wondering why I chose this odd rendered head to write about. The first reason is that I find that this is the type of “graphic novel” that really pushes the boundary on what people truly define as a Graphic Novel. All the criteria is met, and the goal of each strip is often ambiguous and hard to understand, but there is always entertainment to be found behind each one. People often think when hearing the word “comic” or “graphic novel” of popular, well known pieces such as Garfield, or Marvel/DC. But what comes to my mind, are short pieces like this, because of the novelty and strange humor associated with them. Now many people may argue that because of the length of these “comics”, they cant truly be considered to be in the same ballpark as previously mentioned titles. The reason I dispute this is that another criteria that is unspoken, follows suit throughout all of the discovered Meme Man comics. That is this strange universe where the Meme Man does not like any type of vegetable, and he also does not like a character named Orange. After reading a comic that explains how Meme Man began, a universe where anything can happen is born. Anything goes in this universe, as long as the 3 simple rules are obeyed. Here is an example. 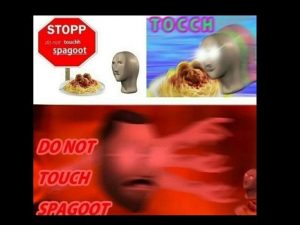 Looking at this, very short, comic strip, one can see that the Meme Man has come upon a plate of spaghetti and a stop sign that tells him not to touch it. He touches it anyway and is met with another giant head that tells him not to touch. Its short, its simple, its stupid, and to me, its ridiculously funny. All the criteria for a comic is met here, and the aforementioned rules are obeyed. This comic was made by a different user than the one who made the previous, but how would you ever know?

This segways us into the second reason; because of the fact that anyone can create their own comic using this image, and it will be widely accepted as work crafted by the original creator. Nobody knows just who made this masterpiece and following suit to the 4chan user who made the above comic, you could guess that it’s anyone. It could be you, or me, and no one would ever know.  However, because of this, there are many posts on sites including the Meme Man that are just, memes. There are also videos of the Meme Man, and “comics” that don’t fit criteria anymore. That, I would say, is what prevents this from becoming a widely known comic strip and forces it to remain a form of “s***posting” that is prevalent on forums like Reddit and 4chan.

There is one video that you can watch to get a better understanding of the flow of these comics, and to learn the appropriate voices of each character you will encounter in the ongoing universe that is Meme Man comics, and I will provide the link below. Please enjoy the goldmine that is the Meme Man and let me know how you feel about its eligibility to be considered a graphic novel, as I have deemed it worthy to be once assembled into a collection.

1 thought on “The Meme Man: Who lives on Meme(y) Lane”