Now, I will admit: I don’t read comics that often. Back in my preteen years, sure, you could often see me with manga in my hands. Sometimes I’d read the Sunday Comics section of the newspaper, but outside of that? Never really got into comics. However, from what I have seen of comics here and there, there’s a trope (if you could call it that) that never ceases to make me bust a gut from laughing:

Characters that are fully aware that they are in a comic.

Characters like Ignatz, from Krazy Kat, and Deadpool are notable (and notorious, in Deadpool’s case) for their constant and humorous meta comments that pick fun at the nature of comics. Those characters that can see the speech bubbles or panels and play with them within their own world crack me up every time. 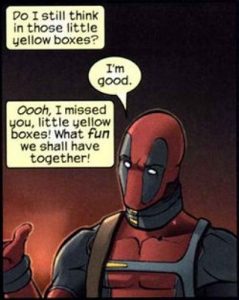 And while I was thinking about whether or not to write this blog post about those types of characters and tropes, I got to thinking about why this trope is so funny to me. And that way of thinking (and a very humorous Google Images search) lead me to a new revelation about the meta jokes within comics. This revelation is that there are two types of meta jokes that I see often (as often as I see comics, that is): The punchline type and the “random for randomness’ sake” type.

The first type, the punchline, is what I see most often throughout different comics. This type, as the word “punchline” would suggest, comes at the end of the strip, after the beginning of the strip is spent building up to it. It can be seen here, in these strips from Cyanide & Happiness. 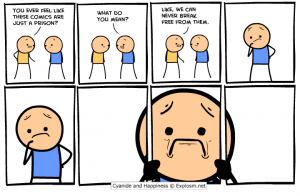 It’s also here in this bit from an Australian comic called Ginger Meggs.

And this type of meta jokes is funny just because of the nature of the set up and delivery. It’s a nice, thought out, wacky joke. To me, that’s what makes them funny. They act like normal jokes, they just also so happen to break the fourth wall while doing so.

The other type, which I’ve (sort of ungraciously) named “random for randomness’ sake” is, well…random. It usually does not follow a set-up, but instead, is just peppered into otherwise normal dialogue, as seen here: 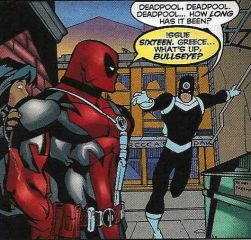 This type is what fascinates me the most, if I’m honest. It fascinates me because the only time I ever really see it is within Deadpool comics. Deadpool, as the comics and fans suggest, often make these meta jokes due to his unstable mental state (I say suggest because I, personally, have not seen an issue out right say this). To the reader, it feels natural for him to make jokes about “little yellow boxes” or other comics, or to even talk to the reader throughout each comic. And, if I’m honest, I actually have no clear read as to why Deadpool’s particular brand of meta-ness and self-awareness is so humorous. At this point, I am inclined to just accept them as “just plain funny.” 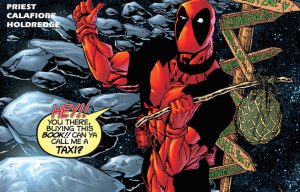 But, of course, the fact that I have no idea why “random for randomness’ sake” makes me want to ask my fellow bloggers and readers if they have any indication as to why this is funny? Is it just because it’s random? Or something else I am missing? Or am I the only person who finds this funny and spent way too much time investing in this? Whatever the case may be, I thank the comic gods meta jokes exist within the medium.