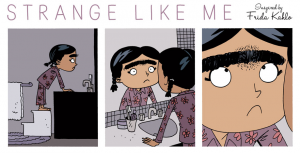 An artist’s muse can be anything from a song, a color, a person, to pretty much anything in the world. Gavin Aung Thang started a project of comics, Zen Pencils, that were inspired by famous quotes that he finds influential. I remember coming across the comic Strange Like Me and thinking that 10 year old me would have been so happy to have seen it. The comic was inspired by Frida Kahlo (who just happens to be my favorite artist). Her relentless pride in her features that are not considered traditionally beautiful continue to inspire women today to transcend past the notion that women are nothing more than a pretty picture. 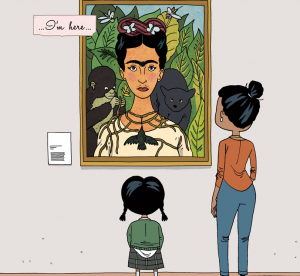 The comic starts with a little girl who has very big eyebrows that connect. She gets bullied in her classes and can’t understand why there is no one else like her. She’s convinced that she has to be the strangest person in the world. She finally begs her mom to take her to get laser hair removal. Instead, her mom takes her to the Museum of Art where the little girl sees a painting of one of Frida’s self portraits. This is my favorite illustration because the difference in size between the girl and the painting depicts the large impact the painting is having on the girl. Frida is above the girl’s head and the text, “…I’m here…” makes Frida appear like a god-like voice from the heavens speaking to the girl. Finally, the girl realizes that being strange isn’t bad at all. Frida Kahlo is a figure she can look up to and it’s like she finally has a friend.

I can relate all too well to the subject in this comic. I always had heavier eyebrows than the other girls in my classes and was constantly made fun of. I begged my mom to let me get them waxed since I was in second grade but she would never allow it. (The irony, though, is that thick eyebrows are in fashion now and everyone who made fun of girls with hairy brows is filling theirs in to look like ME now, ha!) Anyways, this comic really spoke to me and I looked at a couple more of Thang’s pieces from the Zen Pencils project and think that they send really great messages on a variety of different topics, ranging from specifics like silencing freedom of expression/speech to lighter topics of love and romance in life.