Hitoshi Ashinano is an acclaimed comic writer and artist from Japan. He doesn’t have many works and none of them are exceptionally popular, but what he has produced has been well received by many readers. His most famous work, Yokohama Kaidashi Kiko (Yokohama Shopping Log) won the Seiun Award in 2007 for Best Manga, and even though it has not been localized outside of Japan, it has still received praise from local and foreign critics alike. Yokohama (a real city in Japan, and also what I will refer to the comic as henceforth) Kaidashi Kiko stands as the best example for what Hitoshi’s narrative style most notably entails.

The story of Yokohama is a simple one. It is a very character driven story that does not rely on an ongoing arcing plot to direct what the story is about or what the reader is supposed to pay attention to while reading. It is an episodic narrative with individual stories including things as simple as a character walking by a lake, delivering a package, sitting in an empty cafe, or watching the sky. And that’s it. What fills the absence of a concrete, digestible narrative is primarily the characters, but also, and perhaps just as important, the setting itself. Yokohama relies on its characters to fill it’s setting and act as guides for the reader to explore that setting while enjoying the characters’ company. The protagonist is a character named Alpha, a robot (though you wouldn’t know by just looking at her) living in a post-apocalyptic world that is more lush and more alive than a post-apocalyptic setting naturally implies. Alpha has a cafe and at some point loses that cafe. People grow up, get relationships, lose relationships, leave home, come back home, and so on. Stuff happens, sure, and if you had to pinpoint an overall theme for Yokohama it would probably be something like the passing of time and how people react to that (which is made to be very interesting when the main character is a robot who does not age while everyone else around her does), but the point of this story isn’t to make a statement about these ideas, it’s to use these ideas to play to a reader’s sense of nostalgia and sentimentality. Post-apocalyptic stories are usually very dour and critical of some social function. This post-apocalyptic story demands its reader to relax and admire beauty. 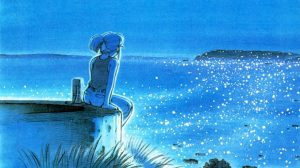 The above picture is of the protagonist, Alpha, sitting by the sea. The reader may not notice this initially, but the white dots on the ocean’s surface are lights underneath the sea,lights are from a sunken city. This is a post-apocalyptic world, and we’re never told what happened. The story never discusses how the world is the way it is, what drove it to this point, or where it is currently headed. It fully embraces its setting and asks the reader to enjoy the details. Travel is a key component of Yokohama. Many character set out to walk the earth and often times we just watch people leisurely walking around. By doing this Hitoshi avoids relying on tension to provide the substance of the story. In this sense it is not a traditional narrative, and perhaps it could be considered experimental, but as a reading experience it is both fast in its consumption but slow in its pace. In some chapters, such as the traveling ones, from panel to panel the only change is at what point the character is standing. Sometimes there is narration, which forces the reader to slow down, and sometimes there isn’t. When there’s not the reader is left with the same quiet background that the character is in. So to some degree, even when we’re not getting into the characters head through their own narration, we are allowed to sit right next to them and experience the same thing they are experiencing, which is most often the world they live in. 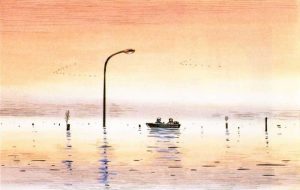 Similarly to the first picture, in this picture we see street lights peering above the surface of the ocean. Again, we’re never told why this is the way that it is, and the plots of the stories never involve any character researching the matter, we are just shown this world through a character’s point of view, and made to accept it by them not questioning it. It is very intriguing, to be sure, but Hitoshi crafts this story and world in a way that focuses on characters but fills the peripherals with visually interesting details. They don’t necessarily matter, the point of the story is the characters, but they make the world of Yokohama something to be enjoyed on its own, should the reader be inclined.

The reader may be asking what makes any of this is interesting to read and why they should care. And that’s a good question to ask. Why is something that I’m only shown in the background and never allowed insight into entertaining, or at all interesting? Like everything, this is ultimately a matter for the individual, but for Hitoshi Ashinano’s works, the appeal for this style is in how the characters live their lives in this setting. Throughout the course of Yokohama, we are made to love the world Alpha lives in because of how she grows with and reacts to the people around her. It becomes as familiar to us as it would be to any of them.