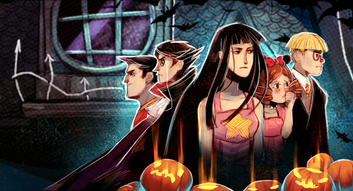 The webcomic The Outer Door by Yufei has over 2 million views and took 3 years to complete from the first published page to the Epilogue. It is about 110 pages long, however, the page lengths vary making this comic longer than a reader might suspect. The art is lovely, but what caught my eye initially was the coloring. I came for the coloring and stayed for the story. I make a point of mentioning how long it took to complete, how many pages went into it, and the quality of work, in order to emphasize this next point. The Outer Door was intended to be a first attempt just-to-see-if-I-can webcomic.

As pictured above, the story opens with five kids (four pictured in the bottom panel) looking at an old house and deciding that the reward of Halloween candy is greater than the risk of imminent and creepy death. Being trapped in a stranger’s house may be very eerie (maybe even a little scary), but the balance of humor and the inkling that something is missing prevent the reader from becoming too upset by anyone’s demise. Little did they realize when they were making fun of each other that that is exactly what awaits them (of course!) when they are asked to come inside while the owner gets more candy. It seems too scripted… too easy to trap them… and for good reason as the reader might notice; the reward for their misgivings is riddled throughout the comic to maintain suspicion, and an outright explanation in the Epilogue.

Overall there are certainly clichés in the story, but they seem forgivable because of the way they combine to create something thrilling. A reader can think there should have been a few more twists, however with all things considered 100 pages is not a lot to work with to make an intricate plot… certainly not if the author has any respect for pacing or wants to showcase other aspects of the story like art or witticism. The plot holds up compared to other webcomics of similar length.

While artist’s comments are possible on Tapastic, the website where TOD is hosted, Yufei rarely wrote in the Artist’s Comment section. However, they did tell readers, “It was supposed to be a short comic just to see if I can do something bigger than comic strips. I learned a lot about doing web-comic while drawing TOD” after the Epilogue. Throughout the story the reader is made aware of Yufei’s busy life writing the comic and striving for weekly updates while still working a full time job; in fact, they took a hiatus towards the end of the webcomic. Even still they pushed through and finished it. There is something special about an artist’s first work that becomes indicative of their future path, and if The Outer Door is anything to judge Yufei by then they will be on the path to entertaining readers with many more comics no matter what life throws at them.