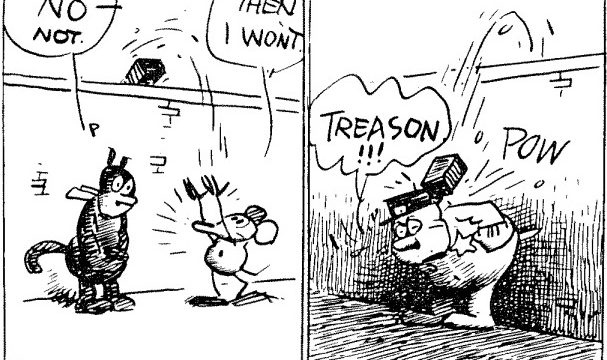 While we read the Krazy Kat comics, I really enjoyed them. So, I figured I would take one of these comics and change some aspect of it. Here’s the strip I chose to work with, courtesy of Professor Whalen’s examples on Canvas:

Krazy Kat is very responsible as far as the law is concerned. Despite loving Ignatz, he sides with “Offissa Pupp” when it comes to the strict brick-throwing laws. Ignatz, of course, somehow finds a way to hit Krazy Kat with the brick regardless of the rules. This time, he does so by throwing it over the wall and hitting Pupp with it, who throws it back. We don’t see what happens next, but it’s pretty easy to assume.

For the disassembly project, I decided to change up the dialogue on this strip. I took the words off the speech bubbles and started to move them around, reorganizing them until I got a different narrative. What if Krazy Kat was actually a bad influence?

In this strip, Krazy Kat encourages Ignatz to throw the brick (at whom? who knows). Ignatz agrees and throws the brick over the wall, which hits Pupp. In this version, Ignatz knows what will happen when the brick comes back — and so doe Krazy Kat. He feels betrayed while the brick comes at his head and Ignatz, chastising him, walks away.

The purpose of this re-wording is to change the characterizations of the characters. In this version, Krazy Kat really isn’t as sweet and law-abiding as he usually is, and it’s Ignatz who turns around to set him straight.