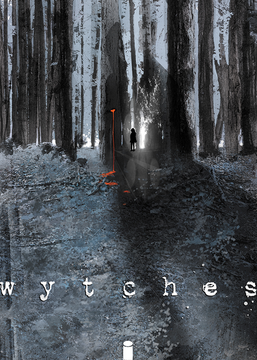 In the comic “Wytches,” by Scott Snyder, the main character Sailor is “pledged” to the wytches so that her mother can live without the witches bringing her continual misfortune. Sailor’s mother is the one that in fact pledges her so that she can continue on with her husband and have another child without worrying about the wytches hunting her down.

The first part of the comic I disassembled was the part that shows who is attacking Sailor and how. In the comic it is her mother who attacks her with a gun. By taking away the knowledge that it is in fact Sailor’s mom who attacks Sailor, it takes away the vital realization that her mother is in on the wytches’ plot to capture Sailor.

Additionally, the “Krack” sound that is still depicted in this part of the disassembly indicates that Sailor is being attacked by an object, which results in her falling down the stairs. The wytches in the book never held up any objects, making the possibility of a wytch attacking Sailor less likely as well.

So by default a human must be attacking her, and the only possible suspects are her parents since they are the only individuals inside the house. It could be either her mother or father that attacks her and thus is in on the wytches’ plot. If it were her father attacking her, this act would not follow his characterization in the previous pages of the entire comic. Therefore, it would most likely be her mother who attacks her.

The process it takes to conclude Sailor’s mother had something to do with her pledged status is somewhat of a stretch; so, taking away the identity of her attacker in this part of the disassembly is detrimental to the entire story’s backbone.

For the last part of the disassembly, I removed all indications of where Sailor is located, in addition to what is attacking her. With no clear way of knowing what is happening to Sailor, the possibilities for her attacker become endless. She could have been attacked by the wytches, which after reading the comic is the most likely case, since in the page before she is shown walking through a door not clearly defined as the door leading to her basement. So perhaps she is falling back into the wytches’ clutches and becoming part of the wytches’ tree, as is what happens when individuals are pledged and then captured. Such ambiguity removes the strong transition between Sailor’s story of being hunted by the wytches and Sailor’s mother’s story about why she pledged Sailor.

By removing the details of Sailor’s attacker and the atmosphere surrounding her attack, the transition from mother to pledger becomes unclear. Details like the identity of her attacker, the sounds created in the attack, and the location of her attack are imperative in revealing the hidden motives of Sailor’s mother. Without these details subsequent pages of the comic that detail the background of Sailor’s mother, and her decision to pledge her only daughter to the wytches, don’t transition smoothly. Lacking a smooth transition, it makes further comprehension of the wytches’ motives and backstory harder. Only by seeing Sailor attacked by her mother does the reader clearly understand that her mother wishes to do Sailor harm.