In a world where Internet is king and information is quite literally at the tips of our fingertips, people are able to answer the most trivial and complicated of questions proposed to them and learn more about topics and ideas that they were previously ignorant of. Now, a 2,000 year old religion that has faced criticism, isolation, genocide, and much more has the ability to reach and teach people all over the world 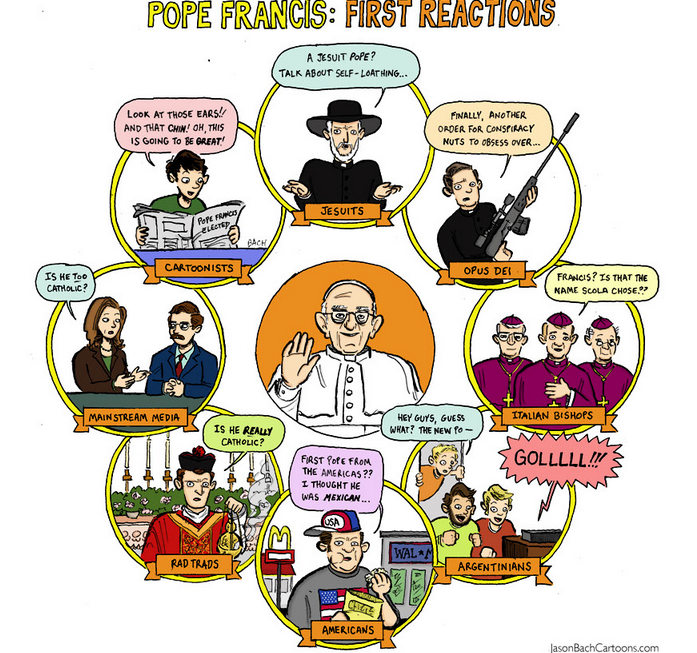 through the simple click of a search bar. Catholicism’s beliefs are difficult for people who know little to nothing about it to understand; however, through the accessibility of the Internet as well as its ability to provide simple ways to convey information, Catholicism is able to reach people of all ages and beliefs. Jason Bach, a web-comic designer and cartoonist, creates a series of comics that explain beliefs of the Catholic faith, inform readers of current events happening within the Church and Vatican, and also simply defends the Catholic faith amidst objection, which you can explore here.

One of the most debated issues of Catholic teaching is the fact that the Eucharist (which is the unleavened bread given at mass) and the wine is the physical Body and Blood of Jesus Christ. Different sects of Christianity were formed over this one issue because they believed it to be sacrilegious and inappropriate to believe such a thing. Therefore, Protestant sects believe that the bread and wine served during service is just a symbol. However, Jason Bach’s comic regarding this debated topic reveals a common defense the Church explains in a comedic way.

Usually, in the Bible, when Christ is using an analogy, He will say “Amen, amen I say to you” which means that the previous story or statement He

said was simply a metaphor. But, when He tells his followers that His body and blood are to be consumed forever lasting life, He does not say that this which means that it is to be taken literally. Bach successfully shows this interpretation in this three paneled comic as well as shows the beginning of the split of followers because of this belief. 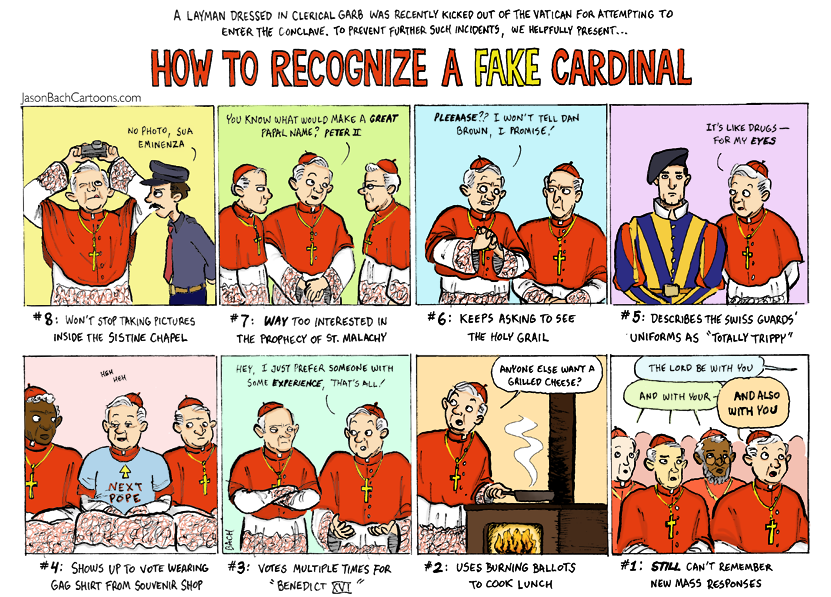 Jason Bach also keeps readers updated with current happenings within Vatican City and the Catholic Church. He does so with comedic explanations and scenarios of such events. Bach explains that a layman (basically a normal person who has no authority within the Church) dressed as a Cardinal (the second highest position in the Catholic Church below Pope) to try and enter a section of Saint Peter’s where lay people were not allowed. After such an explanation, he humorously provides reader with an explanation as to why lay people are not able to hold such powerful authority in the Church.

The last aspect of his Catholic comics that Bach covers is the media sensationalism of simple facts of Catholicism and Popes. In the below comic, Bach criticizes the media for its inability to tell simple facts as well as its inaccuracy in reporting on things of the Church. Through a simple statement, Bach shows the corruption of it through main stream media and how this puts the Church in a bad light despite the simplicity of certain aspects of the Church. 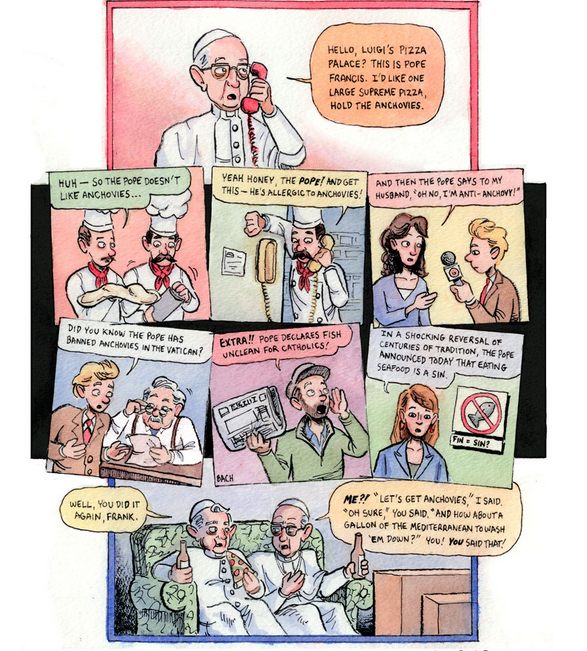 Overall, Jason Bach’s comics provide readers who are both familiar with the teachings of the Catholic Church as well as those who are unfamiliar with them a source of comedic relief while also explaining and providing information about Catholicism. Bach uses the Internet as a means to communicate information about the Church and specifically uses the web-comic format to appeal to both adults and children so that they may understand as well. So the Internet is not simply a tool for reconnecting with old friends or for YouTube videos, but also a means of education, information, and defense of age-old religious beliefs.