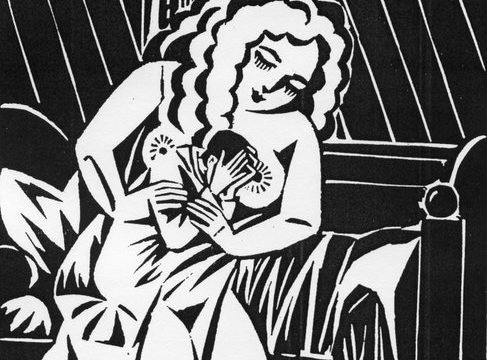 The City, by Frans Masereel, is composed of many different woodcuts in succession, which manages to create a visual story that is largely up to individual interpretation. The story is largely open to interpretation, because it has no words to guide the readers thoughts; the images then become the most powerful indicators of theme. One particular image towards the end stands out; it is of a naked woman holding a much smaller man in her arms in her bedroom with the city in the background. After so many scenes of murder, destruction, riots, rape, and so on, the image becomes powerful in it’s juxtaposition to scenes of horrible human acts; instead of another depiction of people’s ability to destroy the world they inhabit, the author chooses to display an image of comfort so that it becomes clear no all people wish to destroy.

Based on the nature of the other pictures in The City, which include death, rape, murder, and so on, the pictures would certainly be disturbing to any individual privy to those events. If someone experienced all these events in real life situations it would most likely lead the person to become distraught, or even depressed, especially about their worldly outlook.

So it would make sense that this man pictured perhaps needs comforting. He is apart of a world where such horrible events happen and either has personally experienced a death, or witnessed another heinous crime. What is most important, however, is that regardless of what he has experienced the moment pictured is most critical; the author chose to display the image of comfort instead of the scene that caused this man to seek comfort. It is the author’s way of showing the good in a world so fraught with destruction.

Many elements contribute to the overall theme of comfort in the image, many of which are tied to the woman’s overall appearance. The way the woman looks down at the man and holds him portrays that she cherishes him and wishes to comfort him. Since she is quite a bit larger than him, and her arms form outward arcs, she appears to have an angel-like quality about her. Her angel-like details serve as a godly presence, a person who is looking out for the man and his wellbeing, so perhaps that is why she is comforting him. The positive energy she radiates also extends to her breast, with nipples that look like suns.

The woman’s characterization is in stark contrast to the man, which even further highlights her position of comfort in the man’s world. He is much smaller than her, melting into her body, and he has covered his face perhaps because he is crying. The way the author drew his bottom half melting into the woman’s shows his reception of her comforting embrace; the distinction between the man’s body and the woman’s is blurred and therefore vague. Only her upper chest and thighs are distinctly separate. Such ambiguity between where the man starts and the woman begins implies that they have a very strong connection, at least in that moment, since they are literally fused together. If they were more separate, or the man and woman more “accurate” in size, there would not be such a strong theme of comfort.

In producing the theme of comfort in so many ways within the image, the author then makes clear

that destruction is not the only act that humans produce. People are also capable of creating positive events that directly influence other people and counteract the harshness of the negative events. Perhaps after such a display of horrible events the author wished to give a little hope to his readers; there are certain comforts in the world. Not all aspects of life are dirty and shamefully horrible, such as the explicitly displayed death, rape, rebellion and poverty stricken scenes in The City.