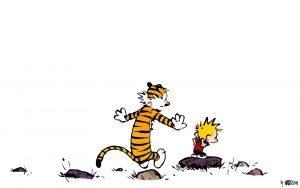 I have a confession to make: I’m not very familiar with comics. Throughout my life I have dabbled in different written platforms but mostly stuck to regular old books. My knowledge about comics is limited to looking through my nana’s Calvin and Hobbes collection when I was kid and the manga phase I went through in middle school. When I was deciding on what I wanted to write about all I could think of was political cartoons and manga but these are a little different than a regular comic. That’s why I think it is important to go over the basic differences between the groups and how each can be analyzed so that all those beginners out there, like me, can understand the differences.

Let’s start with my childhood and look at some Calvin and Hobbes. This is what I would call a traditional comic. This comic ran from November of 1985 to December of 1995 in over 2,000 newspapers. It is about Calvin, a forever 6 year old, and Hobbes, his talking Tiger friend who everyone else sees as a stuffed animal. Some basics of this series and all comics is that they have multiple panels, a story line in these panels, and often feature some type of text.

Above we have an example of a Calvin and Hobbes comic strip. Here we can see Calvin expressing his opinion and Hobbes offering up a sarcastic response. This theme of Calvin supplying the action and then Hobbes giving his input is a big feature in this series. In this comic the main point is stated in the first panel and the joke is concluded by the ending panel. While this a good example of a newspaper comic it is important not to forget about actual comic books that are similar but do follow a slightly different format than just comic strips.

Next up we have a personal favorite of mine: the manga Tokyo Mew Mew. Manga is very similarly related to comics but is used to refer to comics that originated in Japan or are done in a similar type of style. For some reason I had always seen these two groups as being much farther apart than they actually are. Apart from the place of origin, the other main difference is that most times manga are read from right to left whereas comics are typically read from left to right. There are obviously some differences stylistically in the image below from Tokyo Mew Mew compared to the Calvin and Hobbes comic above. One thing I have noticed in manga is the overdramatic and romance aspects dominate whereas in comics humor is more important. 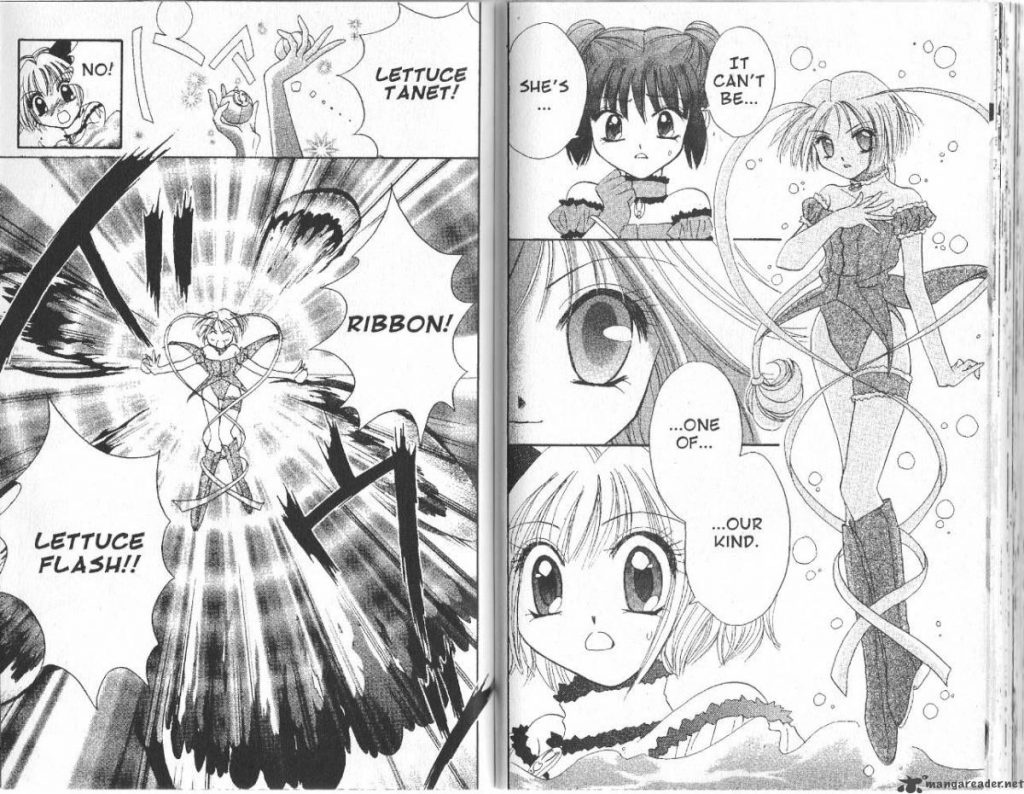 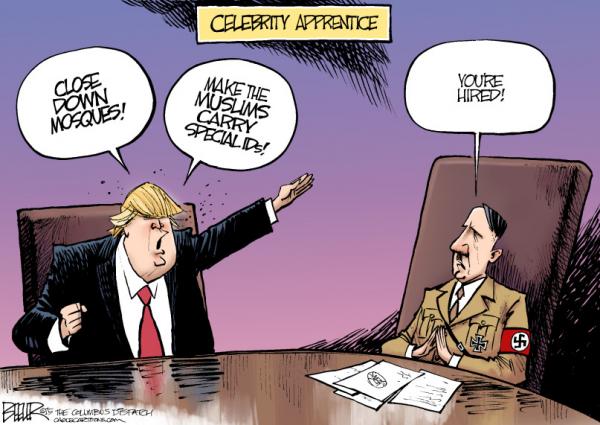 Here I have an example of a political cartoon showing Trump trying out for Hitler’s Celebrity Apprentice.  One of the things about political cartoons, as seen in this image, is that they let the audience figure out what they are getting at without actually saying the punchline. Like in this image it can be inferred that Donald Trump and his ideas are well liked by Hitler since he exclaims “You’re hired!” a popular phrase from Trumps show. This comic shows the similarities between the two leaders and has the reader make the inference themselves.

In conclusion, I found similarities and differences among all three mediums. While comics and manga seem to be more about entertainment, political cartoons focus on sending a message. Along those lines I think comics and political cartoons are better making comments about the outsider world as discussed in  this Huffington Post article. Especially with an election upcoming, these different platforms can have a big impact on the viewers opinion. Another difference between the groups is the style they take. Comics and manga tend to have their own uniques styles while political cartoons are very dramatized. Overall I think all 3 hold a special place in our culture and fulfill their own roles but can have a lot of overlap.