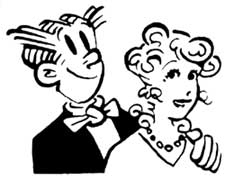 In September of 1930 Chic Young’s, Blondie was first published in newspapers. The storyline followed a beautiful socialite blonde and her rich boyfriend Dagwood. Three years after the comic was published despite Dagwood’s disapproving parents, Blondie and Dagwood get married, therefor forfeiting his family money for love. From this point on they live a middle class life.

When I was young my grandpa used to save the funnies from every Sunday morning and read them to me when I would visit. One of my favorite comics was Blondie. I grew up with the Blondie that was a responsible wife and mother, and was constantly looking out for Dagwood. It wasn’t until much later 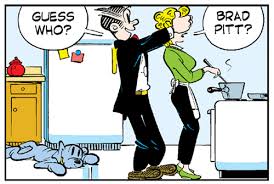 that I realized that was not always how the character was written. I was interested to find that prior to Blondie, Chic Young had other comics such as Beautiful Bab and Dumb Dora that also focused on flapper girls and their beauty over their brains.

In the photo to the right, Blondie is cooking in the kitchen. She’s become domesticated as a wife and often throughout the comic takes on these duties. However, she hasn’t lost her whit or perfect hair. While Young adapted her character to the life of a wife, he made sure to keep all the little aspects that made her so appealing in the first place. While she doesn’t have the money she hoped to, that doesn’t stop her from getting all dolled up, even to cook dinner.

In 1927, just before Blondie was created, Chic Young married his wife Athel Lindorff. It was interesting to me Blondie was the first flapper girl in his comics to get married and change her lifestyle around. She went from a care-free, fun loving, money seeking blonde, to a responsible wife and mother who is madly in love with her goofball husband who lost his fortune. I can’t help but think Chic Young’s own lifestyle change may have played a role in this. Perhaps his wife had a hand in Blondie’s evolution, or maybe Young was inspired to create something new and go somewhere he hadn’t gone before. 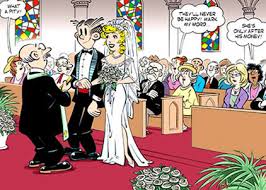 After Young passed away in 1973, his son took over the comic and it has remained popular. Though Blondie has gone through changes over the years to keep up with changing times, she has remained true to her character and true to her man. Young’s decision to create a comic that chose love over money has remained constant, and is part of the comic’s charm.

There’s also a webpage for the daily Blondie strip.

1 thought on “From Blondie to Wifey”