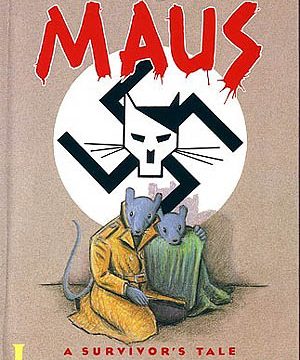 The systematic genocide of more than six million Jews during the Holocaust showcased just how cruel and absolutely wicked humans can be, and the personal history and narratives that survived tell a story that we do not want to hear. It is difficult to learn about what happened, heart-wrenching to read about the fates of so many lost. And yet, we continue to read a diary written by a young girl. We watch movies that win awards on the backs of those who lived the experience themselves. And sometimes, oddly enough, we can read graphic novels to help us better understand history and the depth of human behavior.

Art Spiegelman was born to Yiddish-speaking, Holocaust-surviving Polish Jews. Though he himself had not been in the concentration camps, the effects that he saw his parents go through drastically shaped his life. As an adult, Spiegelman decided to tell the story of what his father Vladek experienced. The result is pair of graphic novels entitled Maus, the only one to have ever won a Pulitzer Prize, that is part biography, part memoir, part fiction, and a little bit part fantasy.

The plot goes how one might expect a Holocaust narrative to go: a Jewish couple in Poland go through increasingly horrific experiences at the hands of the Nazis. I’ll be getting into the plot and how Spiegelman chooses to frame his narrative in later posts, but for now I want to focus on why I said that this novel is a little bit fantasy.

As Scott McCloud notes in Understanding Comics, a reader is more likely to be able to suspend disbelief if characters are cartoonized. Too realistic of face, especially if the subject matter is grim, and readers are likely to pull away.  It is much easier to picture animals, which have no morals or sense of right and wrong, committing the horrible atrocities that will happen on the pages. Viewing animals, rather than humans, in the book gives the reader enough aesthetic distance to hopefully be able to absorb the message. Spiegelman understood this, so he used different species of animals to represent different ethnicities or nationalities of WWII-era Europe.

The Polish Jews in Maus are represented by, unsurprisingly, mice. Cats, the eternal nemesis of the small rodent, were the Germans. Poles who were not Jewish were pigs, and the French were mice. The result of this odd menagerie is that simply by viewing a page, the reader is able to identify a Jew right away. Drawing his Jewish characters as mice is similar to drawing them with prominent Stars of David pinned their chest.

Of course, as is possible in real life, sometimes the characters were able to pretend to be something they were not. In the superhero genre of graphic novels and comics, simply donning a costume and a mask was enough to trick the world and change identities; however, in Spiegelman’s anthropomorphic book, cases of mistaken or imposter identities were more difficult to portray. In one scene, Vladek is seen wearing a mask held by strings when he pretends to be Polish. This rings true in history from the stories of Jews who hid their real identity to try and pass as somebody the Nazi regime didn’t want eradicated.

The only time in the books that an actual human is seen is the very end. Art Spiegelman breaks the forth wall and draws himself drawing the book while wearing a mask of a mouse. He interweaves the timeline of his book’s success and his personal life, his father’s death, and the Holocaust itself. Even this page, when the reader knows that an actual person created this book, Spiegelman seems to hide behind a mask. I’m not certain if he wanted the reader to end with the thought of Jew = mouse to remember the book, though I think that even if this was not his intention, it works. As McCloud wrote, the reader brings life to Art, and to Vladek, as they tell their stories. They don’t need their real faces to do this, and perhaps Spiegelman didn’t want his role in telling this story to be more memorable than those who lived the story. Either way, I certainly won’t be forgetting this page in the book for a very long time.

2 thoughts on “Of Maus and Men”