A comic that has charmed me for years has been Calvin and Hobbes. My older brother brought an entire book of these comics home one day and even though I never really read it, I could see how it was impactful in his life as a young elementary schooler. Now that I am older, I wonder- why was this comic so attractive and why are people still drawn to it?

Bill Watterson, (the creator of the comic) had actually sent in the first comic strip to the publisher of  “Peanuts”- United Feature Syndicate. It was unfortunately rejected, but Watterson prevailed and United Press Syndicate eventually took the comic.

One of the reasons why young people are drawn to this comic is because of the theme of friendship that is incorporated through out each comic strip. Friendship is a theme that often brings people to read a certain series of book, or watch a T.V. show. It is a fact of life that unifies us all, because each of us desire it. The friendship between Calvin and Hobbes, though slightly unusual, is an important example that even though someone is different than you, that should not be the qualifying factor to determine if you should be friends with someone or not. A tiger and a little boy is a strange combination of two individuals as friends, yet despite this they learn much from each other and teach the readers of the comic much as well.

Here are some examples: 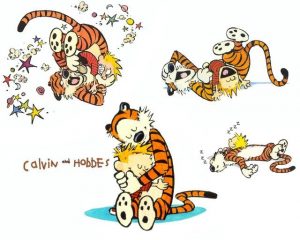 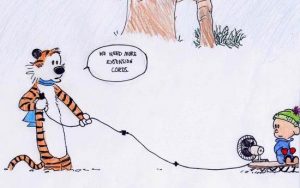 Here are a few links: