Tales of the Unusual, by Seongdae Oh, is hosted on LINE Webtoon. It’s a collection of short stories, most of them are horror, about strange and unusual events. Unlike most webtoons, this doesn’t have an overarching plot that continues beyond the small snapshots. Each series is it’s own story, and as of yet, I haven’t seen any of the older stories revisited in the later episodes. They all seem to be disconnected within themselves. 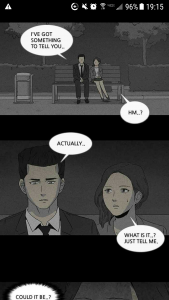 These stories are all unique, and as I said before, most of them contain some horror theme within. The images, while not greyscale, are dimmed in brightness, adding to the creepy and unusual feeling of the comic. Looking at the image from one of the episode, this one focuses on a water that allows one to carve away and reshape their skin, making them as beautiful as they want to be, it is clear what I mean about the colors. While it’s certainly not black and white, it’s not vibrant. The colors lend themselves to a dull feeling of horror and unease.

This article discusses LINE Webtoon and some of the other comics you might see there.  http://marywashicomics.net/article/a-different-kind-of-comic/