In recent years, there has been an increasing amount of comic book adapted television shows that are aired throughout the week. Each month seems to bring titles from years past with the adaptations catching the viewers attention, all the while allowing them to see many beloved comics in real life action. Within this increase of popular representations, there has been a particular genre that seems to be the most captivating among many viewers. Genre’s that deal with gore and chaos have attracted many to the screen including titles such as The Walking Dead, Into the Badlands, American Gods, and Preacher, which are comic books re-envisioned into the form of television shows.

Since the 1950’s where the regulation of comic books was at an all time high, the amount of comic books that pertain to the genre of horror has grown significantly. Although anything that had to do with this genre was banned or disagreed with, this ideology has since changed and with it a great community has risen in its obsession with gore and death. Along with this rise in horror comics, film adaptations that go along with this genre has risen as well. As I have said early, you can clearly see that there are many titles that pertain to this genre that are based on comic books and this is significantly growing from recent years were there were barely any adaptations that pertained to horror except horror movies. However, people are becoming desensitized to such forms of entertainment and are wanted more extreme versions of gore along with their favorite comic book stories.

Preacher in particular, which was first released as a comic book in 1996 and has been renewed for a third season this year, is one comic rendition that has many themes that dwell in the idea of outright chaos. Preacher is centered around the life of a preacher who lives in a small, quirky town in Texas who obtains the gift of persuasion, something he was not supposed to be allowed to have because it is the power of God. Although he was supposed to be a “religious” man, his life is centered around killing and death.  Why does this appeal to so many? Gore and death seem to captivate many because it is not present in many of our lives; its something that is not often experienced. This is one example of the horror adapted comic that has made its way to the television screen, which is one of many that we see today, only increasing the options for such a liking. 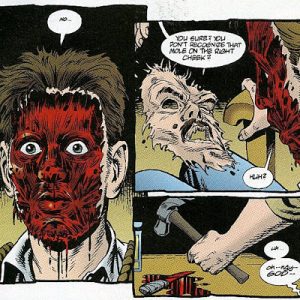 Gore and death have always been popular themes throughout the years in comic books and movies, however, recently more and more comic books are being brought on the air allowing the dark side of the comic book world to be seen by a much larger viewing population. In the series, Preacher, there are some adaptation differences which prolong the killing, allowing the story to be drawn out a bit more for their road trip adventure, which is what the main plot is about. There is also one part, where the town blows up because God has gone missing, which only adds to the death count that steadily increases through each episode. Each episode has to have someone die, if not it wouldn’t keep up with its reputation that exists on the chaotic. With such things as zombies, vampires, and angels, it is hard not to be captivated by these adaptations on the mythical realm with a gruesome revision.

So again, why do people crave the dreadful, adrenaline pumping horror comics and TV adaptations we see today? People are drawn into comic book TV adaptations that pertain to the horror genre because its exciting and different, it brings you into a realm that is a huge contrast to the safe normalcy that many people live. These worlds that are created in these stories are brought to the screen with characters that are not just on paper, but real things that we can’t really experience in a book like we can in live action. This makes it only more real and terrifying for the viewer to be drawn into something like no other.

3 thoughts on “Why do we crave the gory and dreadful?”