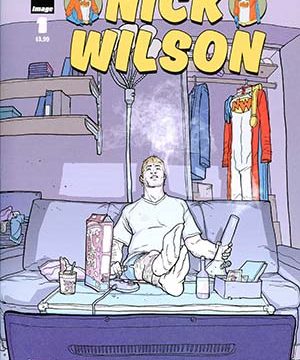 When I was younger the majority of my readings included comic books and graphic novels. I would buy comic books regularly at my local comic book stores and check out a lot of graphic novels from the library. I was pretty avid about doing this until around my junior year of high school. I still read some comic books but i was primarily interested in reading novels. Now that I am currently taking a class about graphic novels I am thrilled to rekindle my love for the medium.

Last week I decided to visit the local comic book store here in Fredericksburg. The store is called Gateway Comics and Toys and it’s only about five minutes from UMW. Since I was not currently reading any comic books I wanted to start a new series. The employees at Gateway Comics were extremely helpful and helped me find some new series I might enjoy. I ended up purchasing two new series that came out this past January. The first one was Deadpool vs. Old Man Logan and the second one I purchased is called The Further Adventures of Nick Wilson. The latter of the two is the one that stuck out to me more, I really enjoyed reading it so I will review it.

The story follows the life of Nick Wilson who is a washed up superhero who is approaching his thirties. It takes place in a world where he is the only hero with superpowers.  He initially was celebrated as a hero and received the glory that comes with the cape, but he mysteriously lost his powers and the fame that came with it. Now he is struggling to adjust to regular life. Nick Wilson went from saving the world to dressing up for kids birthday parties and smoking weed in his free time. In the first issue, he decides to go on a date with his high school sweetheart where he encounters a man named Xavier from his super hero past who needs his help. This foreshadows that Nick Wilson will somehow get his powers back which may answer a lot of mysteries the first issue did not explain.

Life after the mask seems to be a popular theme in comic books as it has been explored many times. A famous example of this is in Alan Moore’s Watchmen. The difference between Nick Wilson and the Watchmen is that Nick Wilson actually had super powers and his story is more comedic. I don’t think The Further Adventures of Nick Wilson is a critique on the super hero profession like Watchmen. It is more so  a story of a man trying to figure out what to do now with his life now that he is average again. It feels like a fresh and modern take on the theme and the character is very likable which makes you want to see him succeed. The art and the storytelling were both very good, in my opinion I give it a 9/10.

I look forward to see what comes next for Nick Wilson. I plan on purchasing the next four monthly issues as it is a part of a five part limited series. After the first issue, I am already invested in the storyline. Nick Wilson’s return to being a superhero is similar to my return to buying and reading comics, both of which I am optimistic.

If you are interested in reading this comic book, stop by your local comic shop or get it here: https://imagecomics.com/comics/releases/the-further-adventures-of-nick-wilson-1-of-5