Metal Gear Solid is actually a game series, two of the games have been adapted into a full blown comic, but there is one game that mixes up their mechanics. MGS: Peace Walker uses the regular mechanics for an MGS game, but the cut scenes are completely in a comic book style (possibly because this game was originally a PSP exclusive). 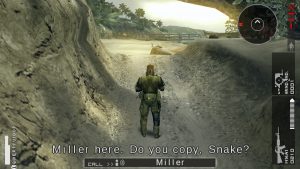 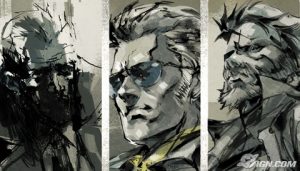 The gameplay here is somewhat typical for a MGS game but the cut scenes are drawn in a comic book style shown above with some animation added to them. It is an interesting choice to style creating a very different experience in the games series. Though Peace Walker wasn’t exactly a popular title, most likely due to it being a PSP exclusive for the longest time making it a bit inaccessible for people.

These small animations give life to the comic, therefore it is where the game itself starts to blur the lines between a video game and a comic. Playing through Peace Walker I’ve asked myself a few questions, the first being “why the hell am I playing this?” but most important for this post, where’s the line? The line between a comic and a game? Why not both? Well, Peace Walker definitely isn’t the first game to do something like this nor is it the first comic to include a game if you wanted to look at it that way instead. Still, it is a very interesting take on a video game/comic.

Peace Walker manages to introduce well rounded characters into the game through the comic cut scenes, managing to keep the aspects of the games in through voice acting and animations, but still keeping the speech bubbles and of course the art style as I have already pointed out. It is the same art style that the full comics have taken. 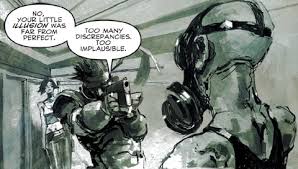 Still, Peace Walker has an interesting take on a short game, or maybe a long comic?