When people think of fantasy games such as D&D, people think medieval times and ages long past. They wouldn’t be wrong. Newman, 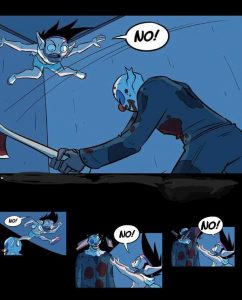 one of the comics featured on LINE Webtoon, take the Dungeons and Dragon’s setting and takes it into the modern world. It focuses on Newman, a gnome, and Gwen, a Drow Elf, who work for the Creature Removal Department, or CRD. This allows them to do the work of a typical DnD player, fighting monsters, without the medieval Hero concept. They use magic-imbued fantasy weapons to fight, along with magic itself, in Gwen’s case. The modern setting of Newman allows them to do so much more and explore different themes than they would be able to do in a typical fantasy setting. For example, one of the creatures that they are hired out to remove is a murderous clown, which Newman happens to be afraid of due to childhood trauma, an enemy which wouldn’t appear in a medieval setting.  It’s refreshing to be able to experience the world and races and fun that appears in the tabletop game in a modern setting, which arguably allows for a wider range of plot for the comic, being able to include cars, phones, and more modern ideas.

One of the ways that Newman updates the world of D&D is by exploring the culture of the Drow. In the typical Dungeons and Dragons universe, Drow are dark elves, a subterranean race that was more or less banished from the surface world. They see other races as beneath them, and generally use them as slave labor, because they don’t see them fit for much else.  That applies to the male members of their own race, too. The Drow are matriarchal, and claim men by taking them as slaves. In Newman, the Drow still keep slaves, however, it’s more of a willing BDSM master/slave deal than it is actual slavery. The Drow women are in charge, and most Drow men delight in pleasuring and serving the women that choose them. One of the couples in Newman is a Drow couple, and they represent this relationship really well. Darius and Katherine have been together for a while, and both are very happy in their roles.  Newman takes the slavery that the Drow are known for and turns it into a very interesting and refreshing take on the dark elves. Yes slavery is present in their society, but all of it is willing. The magic that the women have for controlling their mates only activate when both people in the relationship want to be with each other, and can not just be used to dominate helpless persons. 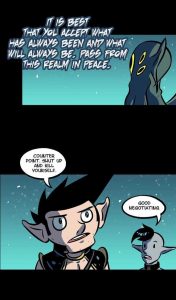 Dungeons and Dragons is full of mythical monsters and legendary gods, and those also make an appearance in Newman. The old ones, the elder gods, are raised from their defeat in what we can assume was the medieval times that the tabletop game takes place in. D&D has at least one, if not more games inspired by the stories of H.P. Lovecraft, the one I’m thinking of is called the Call of Cthulhu. This legendary Elder God gets raised from his imprisonment and is one of the creatures that Gwen and Newman face in this webtoon. I won’t spoil how it ends, but it is a good way to call back to the classic campaigns of D&D, but still put a nice new spin on it.

Newman is a very funny and very worthwhile webtoon to take a look at, especially if you are a fan of D&D or high fantasy. It does a wonderful job of taking the medieval setting and bringing it into the modern world. Here’s a link to the first episode. http://www.webtoons.com/en/fantasy/newman/season-i-ep-1/viewer?title_no=405&episode_no=1