The Line Webtoon comic Apricot Cookie(s)! by Louistrations parodies Japanese magical girl manga and anime tropes, shattering those crystalline figures of beauty and love-ly power forever as the story is created within the traditional parameters of such works.

Its description – “A comedy comic following the life, loves and laundry of Apricot; the only Japanese schoolgirl who can’t transform into a magical girl.”

I first discovered Apricot while exploring the “Comedy” section of Discover, the section of Line Webtoon where anyone may create and post comics.  I was intrigued by the cute image and the vibrant style…and I found way more than I was expecting.

Note: this post contains some minor spoilers, but I limited the images below to only include plot from Chapter 1 of Apricot Cookie(s)! 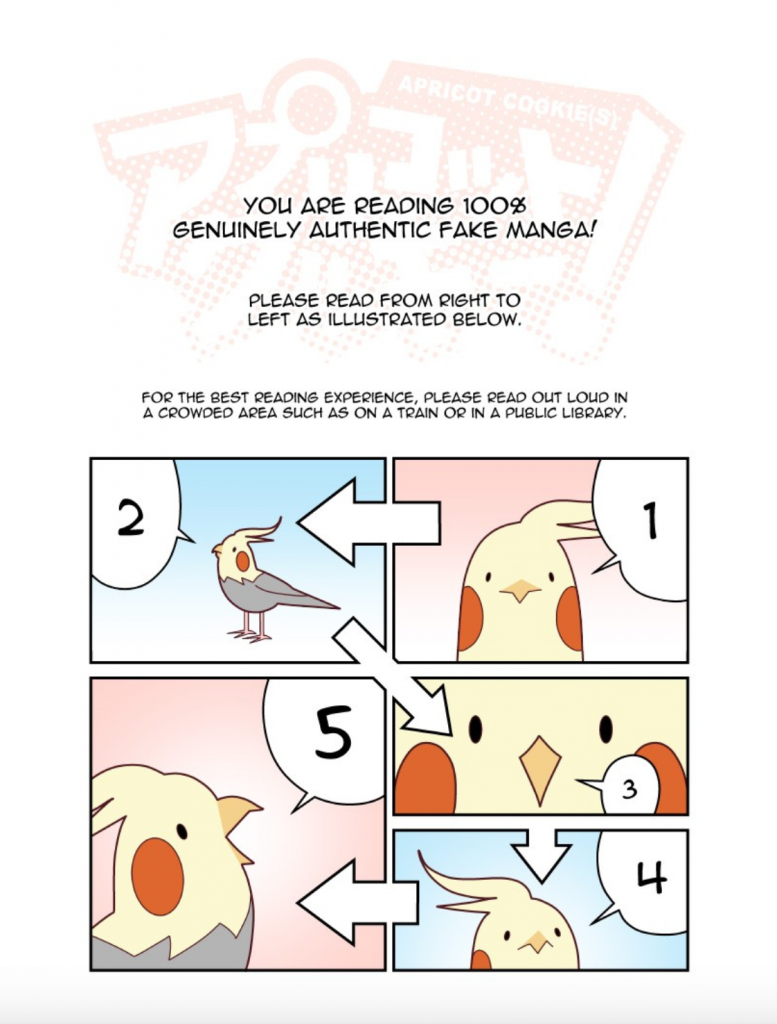 A helpful guide for those unfamiliar with the layout of manga panels, and the first sign of what kind of humor to expect.

To the fourth wall: In the name of Apricot Cookie(s)! I will break you!  In the introduction to Chapter 1, the reader is thrown into a tutorial given by the Director of Darkness, the man in charge of (Japanese) monster activity, who directly speaks to the reader. 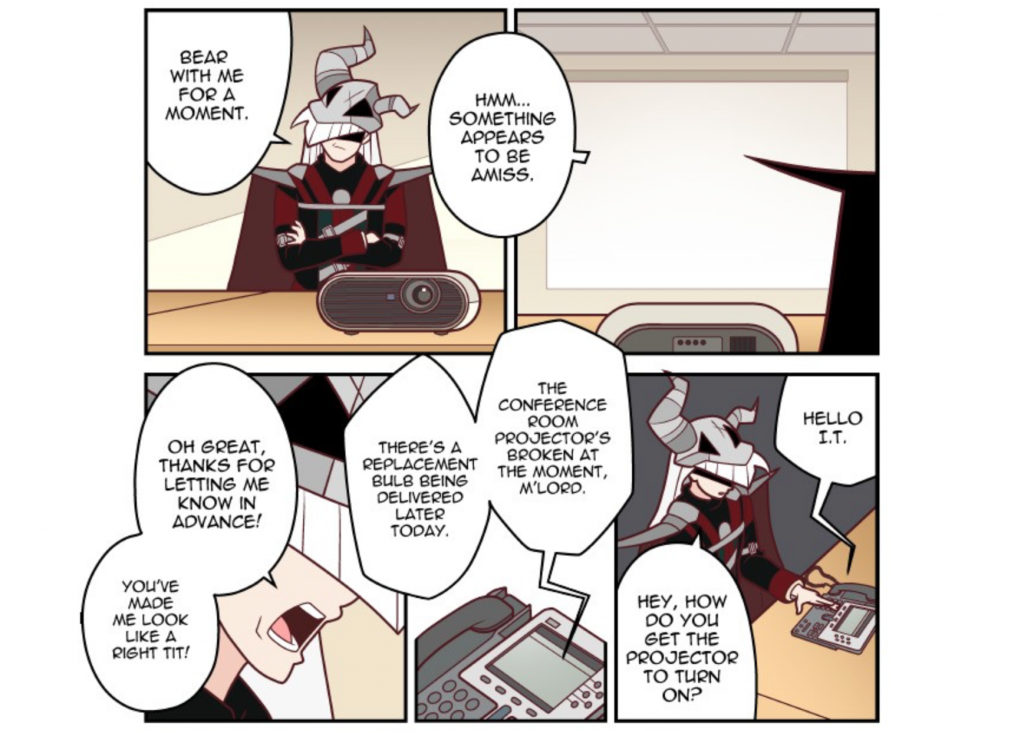 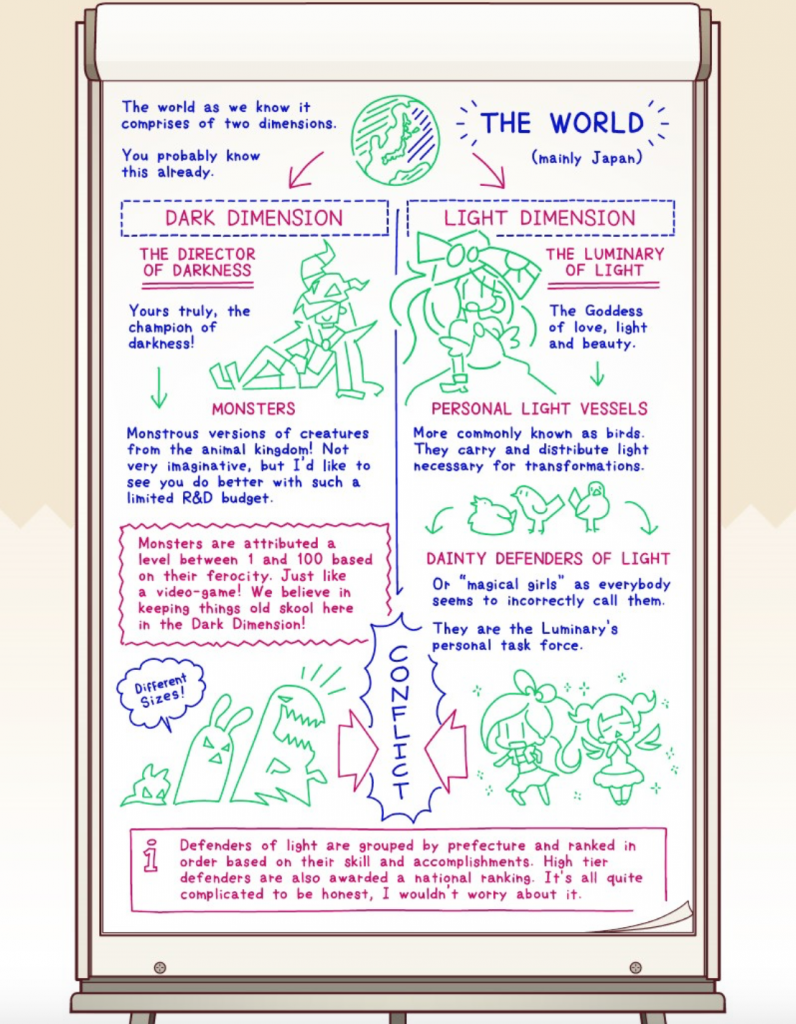 …hence the alternative to the Director of Darkness’ PowerPoint presentation.  Apparently the term “magical girl” is passé. 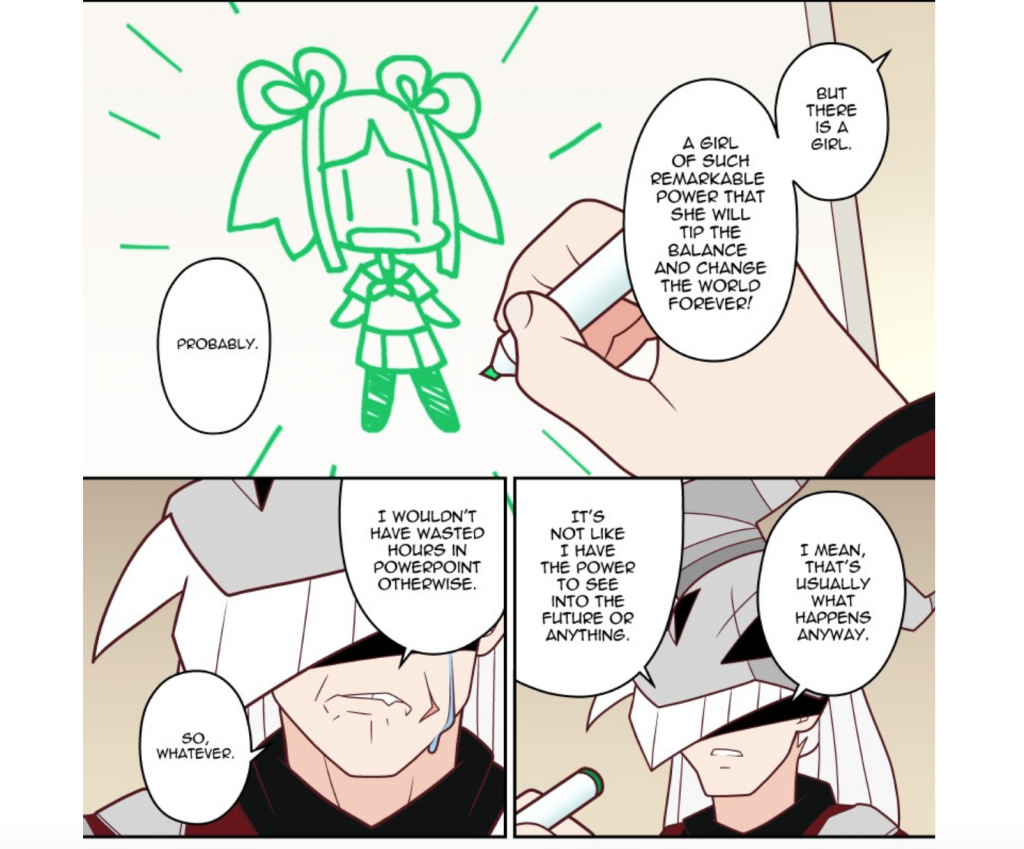 Salty Director of Darkness is salty.

After the tutorial, the reader is introduced to Apricot, a young Japanese girl who looks suspiciously like the girl who will probably “change the world forever,” and her bird Jacques.  After dramatically starting a load of laundry when Jacques poops on her bedsheets, Apricot launches into her morning getting-ready-for-school montage with proper manga-esque flair… 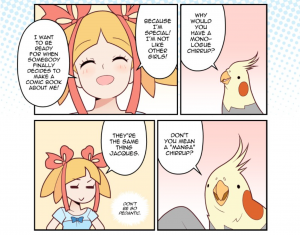 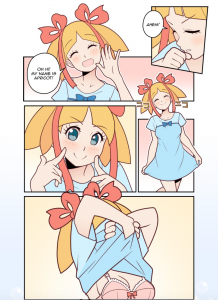 Apricot is an atypical magical-girl-manga main character in many ways.  She overshares information about herself (height, blood type, phone number, the fact that she sometimes tinkles in the shower) as she bathes and dresses herself.  She farts, gasps, and immediately tweets that she just farted (LOL).  She unintentionally, uncomfortably, and unsuccessfully hits on everyone through her blatant, self-confident displays of sexuality.  As a “fake manga” character, she twists tropes and stretches their boundaries to their breaking points, over-doing self-introduction, resorting to fart jokes for comic relief, and eliminating sexuality as subtext in inappropriate PDA.

Toward the middle of Chapter 1, all of the female characters go into nauseating magical girl sequences (due to the sheer number of well-executed and gaudy transformations) in order to antagonize Apricot for lacking the “simple” ability. 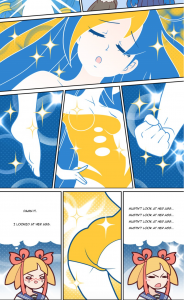 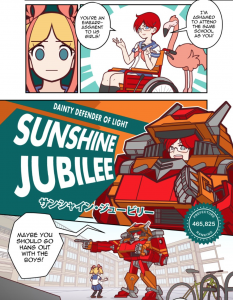 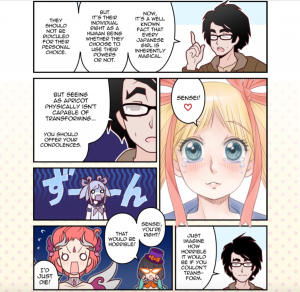 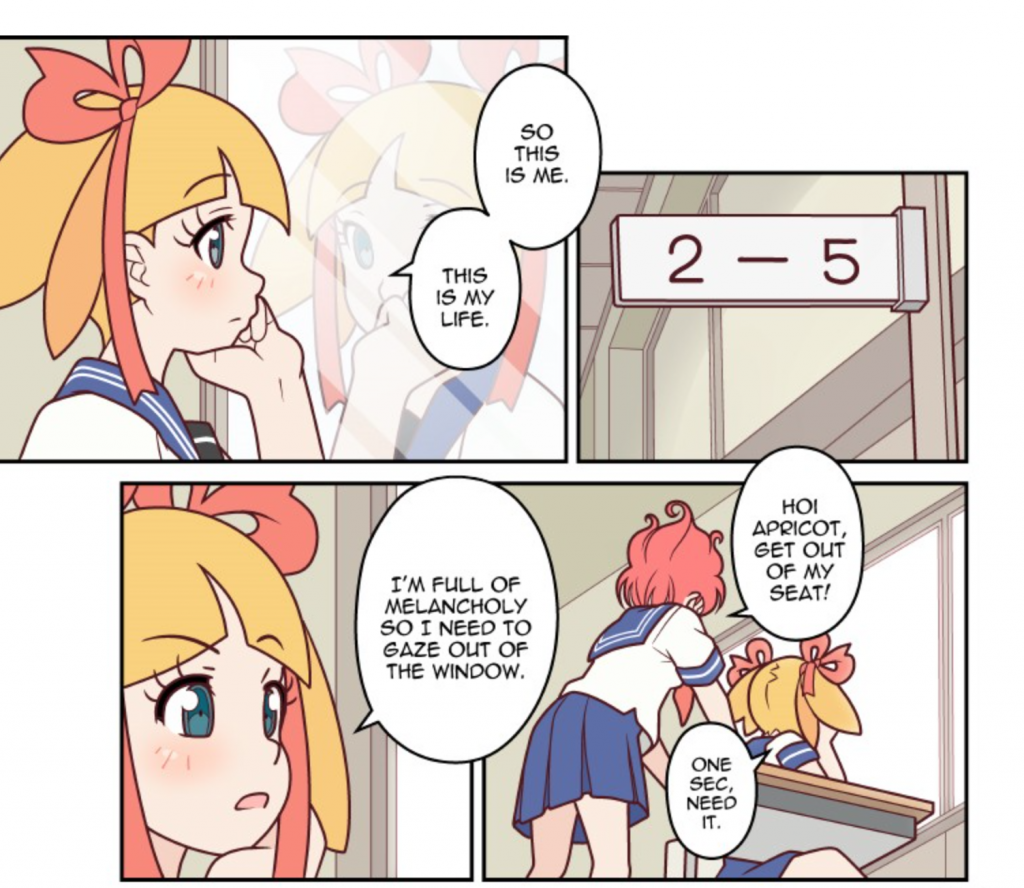 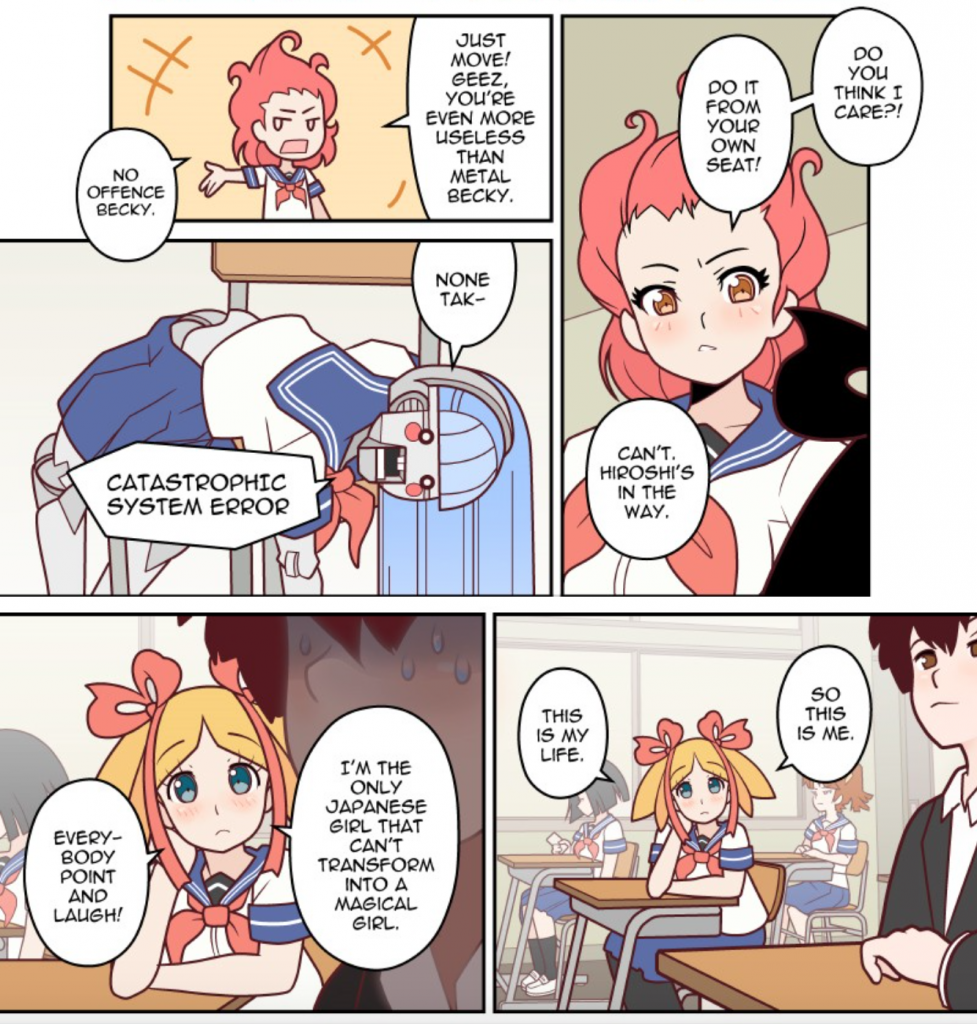 Apricot cannot lament by gazing out of a window, she doesn’t have the window seat.  The comic will not permit it, she has been assigned another desk.  Poor Hiroshi.  He’s the real victim here.

Other comical plot points and twisting of traditional ideas about magical girls and manga (minor SPOILERS!) 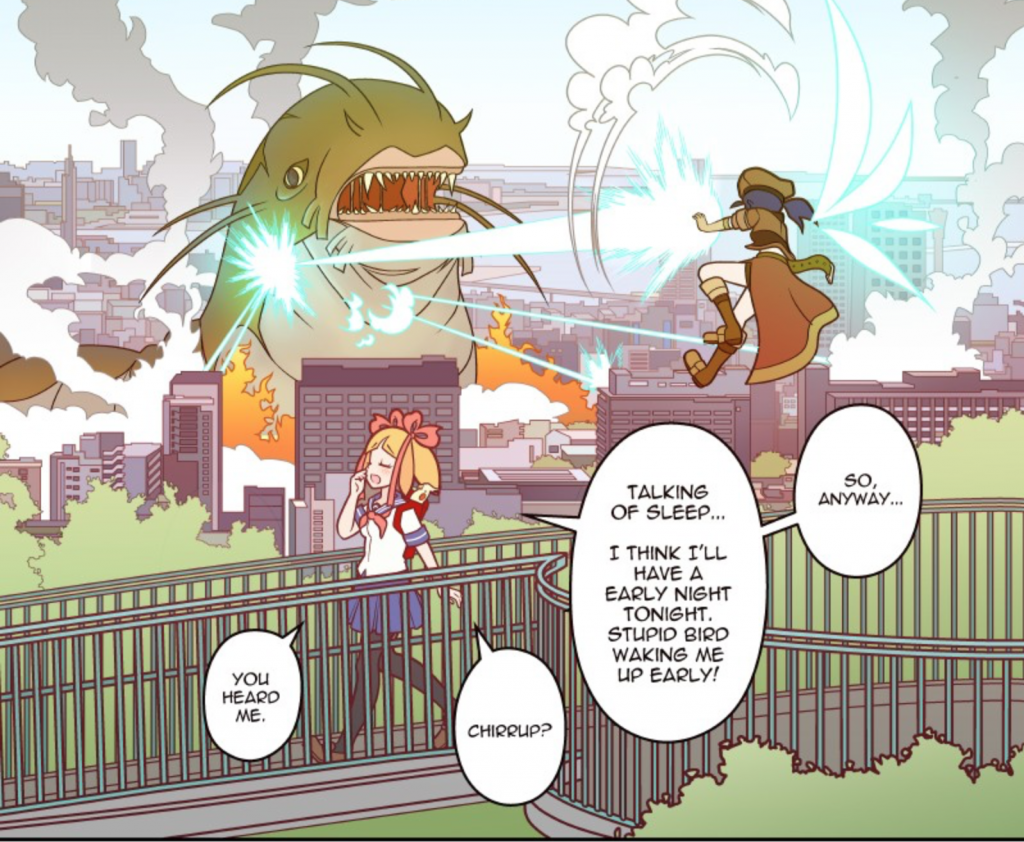 …and the monsters don’t attack her…

Apricot Cookie(s)!  is no ordinary magical girl story.  Its combination of satire with traditional tropes, twisted Hero’s Journey, criticisms of Western perceptions, and glittery fabulousness make it a webcomic worth transforming for.

Continue reading Apricot Cookie(s)!  on Line Webtoon or the webcomic’s other website and let’s start a conversation!

If you would like more information about anime tropes and Japanese anime in general, check out the following books (available at the UMW Simpson Library and at a bookstore near you):

Do You Believe in Magic(al Girls)?

Agents of the Realm: The Raddest Modern Magical Girls