The most important thing that I’ve learned about comics because of this course is that they are meant to be shared, discussed, and reflected upon.  For my final blog post, I would like to share three comics that I found recently at Riverby Books in downtown Fredericksburg. (If you haven’t been, I highly recommend a visit, it’s a used-bookstore-lover’s dream come true.) 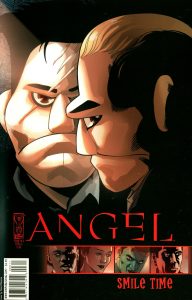 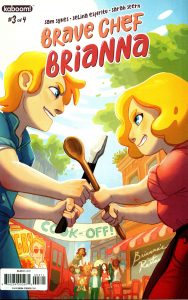 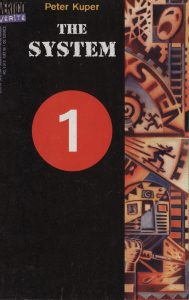 There are many places to find comics in Fredericksburg, from antiques shops like Blue Shark and the River Run Antique Mall to modern comics shops like Gateway and Sage Mantis.  Riverby Books is unique because it places collections of random volumes (in boxes and occasionally outdoor displays amongst literary works ranging from science noir to cookbooks to gritty detective fiction.  There is even a comics collection/graphic novel section that housed a fairly impressive variety of volumes.  However, I was drawn to an upstairs treasure chest with a heavy lid that I needed to hold open with one hand as I flipped through issues with the other.

The first that caught my attention had a cover that depicted what a horror/suspense movie by Jim Henson would look like. 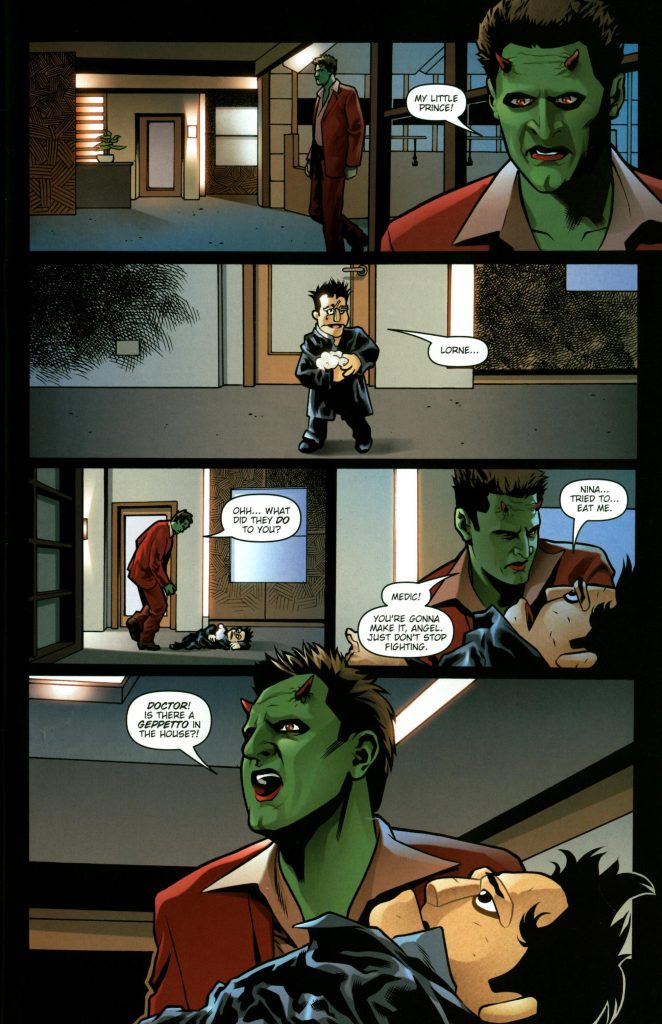 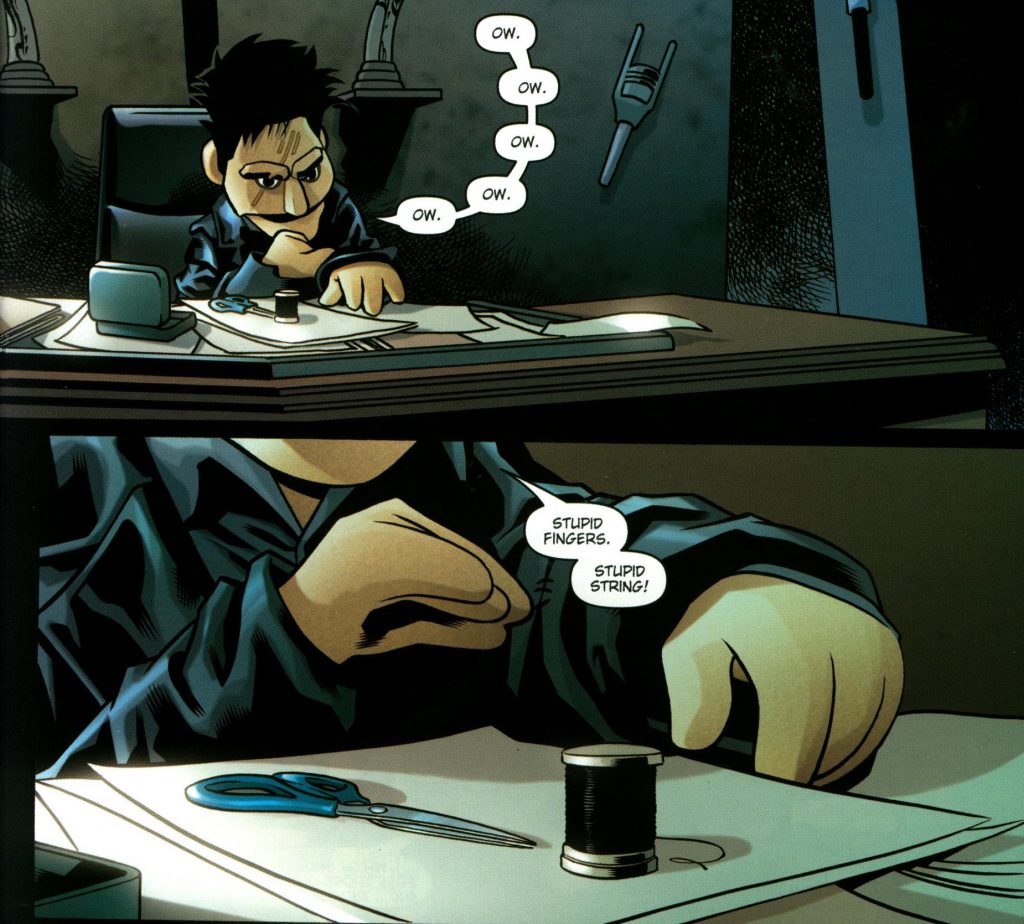 Do sentient-born puppets have an inherent talent in sewing, like breathing for humans, unlike Angel here who typically looks like David Boreanaz?  I enjoy the curve of the small “ow.” word bubbles, they remind me of a line of stitches.

Its art style caught my attention, particularly the contrast between puppet characters and human figures.  It causally mixes squishy felt puppets – carrying either pointy things or possessive demons sucking out the life forces of children – with a ragtag group of magically-gifted forensics and detectives, creating odd battle sequences, puppet humor, and dark, foreboding ethical decisions.  It is at the same time intense and ridiculous – it is ridiculously intense and intensely ridiculous. 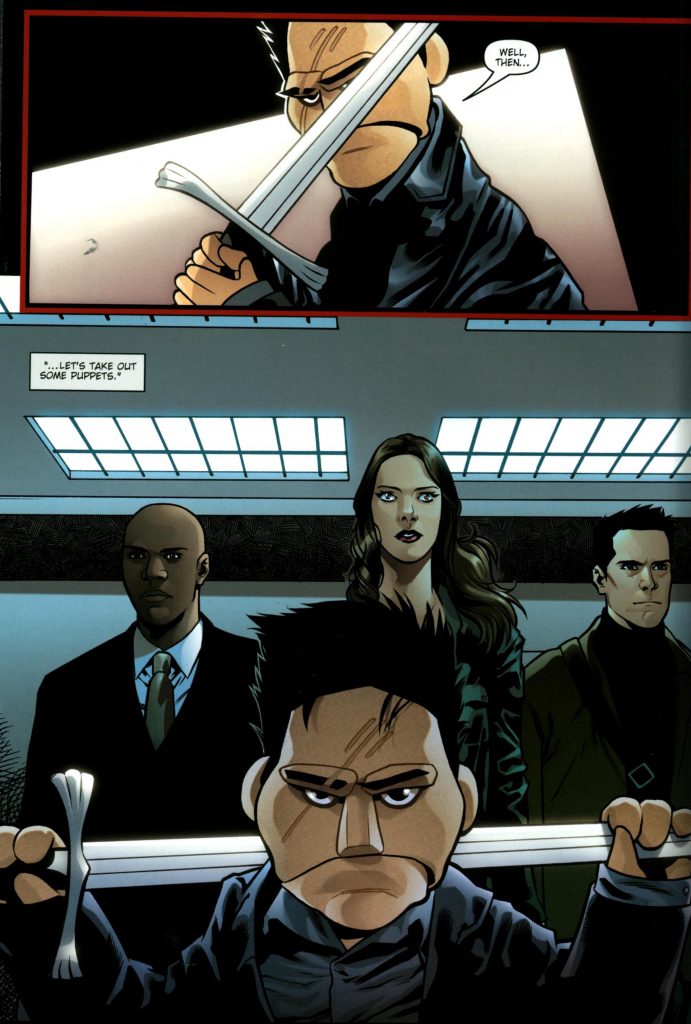 seriously what am I reading right now

My thought process as I read and examined Angel: Smile Time, Issue #3 –

First page: Out of context this is…something.  Angel’s face screams “This dude…”

Page 2-3: This feels like a completely different comic, not just because of the lack of puppets, but the mood is much darker, more low-level science fiction than initial joking

Page 4-5: …and these are from a TV cop drama, except for the odd children’s show watching.  More romantic drama than anything.

Page 7: If a puppet is able to fix himself, does that raise the question of object sentience?

Page 8-9: From cloaking spell to demonic congress in 3 pages.

Page 10: Epic determined stances.  Also, WHO LET THE PUPPET HAVE A SWORD

Page 13: I honestly just…can’t right now.  I love the contrast between the puppet design and the badass phrasing that gives a vibe of ridiculousness and perhaps a wrongness that feels perfectly right.  Great juxtaposition.

Page 21: Why is the nice nude lady in a weird cage?

Page 22: Return of the Romantic Drama TM (featuring weird ways to ask for another kiss) 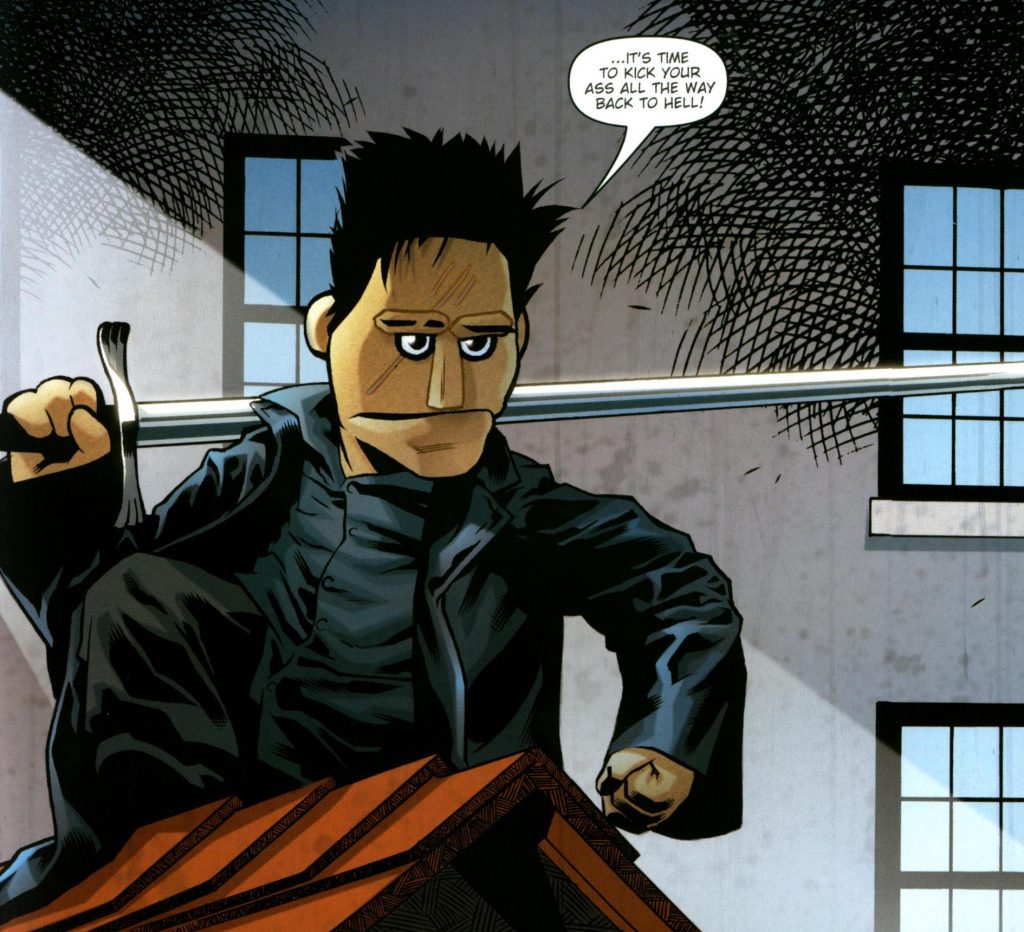 Reading this comic out of context was incredibly amusing.  Afterward, I needed to find out just what I had read…turns out, this volume was part of a comic book adaptation of a TV episode.  The show is called Angel, and the episode is called “Smile Time.”  Apparently, the puppet, Angel, and his odd collection of colleagues in kicking puppet ass are members of the Buffy the Vampire Slayer universe.  “Smile Time” was such a beloved episode for fans that companies tripped over themselves to provide eager consumers with products like a toy line including vampire versions of Puppet Angel (which I would very much like to un-see) and adaptations of the episode, such as this comic. 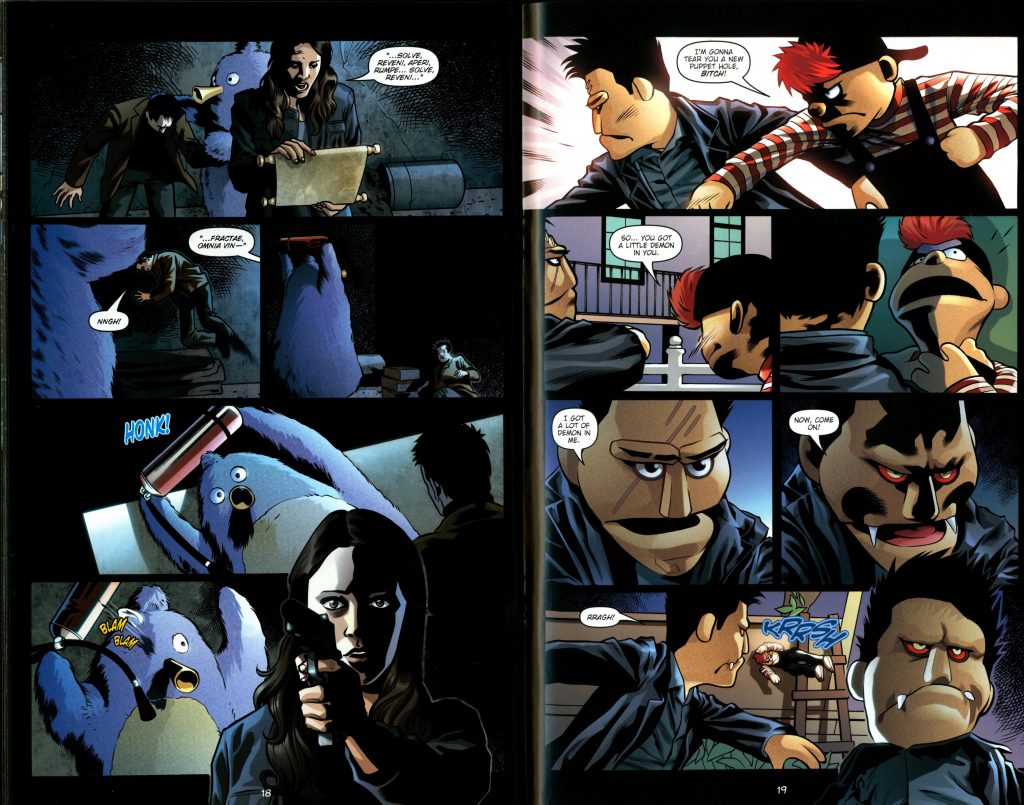 I think that the comic version makes this crazy scene more intense…but something about the television version really satisfies my need to watch horrible CGI and graphic puppet death.

Brave Chef Brianna caught my attention with its vibrant colors and art style that reminds me (for some reason) of a combination of Steven Universe and Scooby Doo.  It also reminds me of Ghosts in that the combination of a bright and cheery aesthetic pairs with serious themes such as sibling conflict, family relationships, running a business, obeying the rules, and fighting for what you believe in.

Where can I get Suzan’s shirt?  Also, when I am upset, my background erupts with lava too. 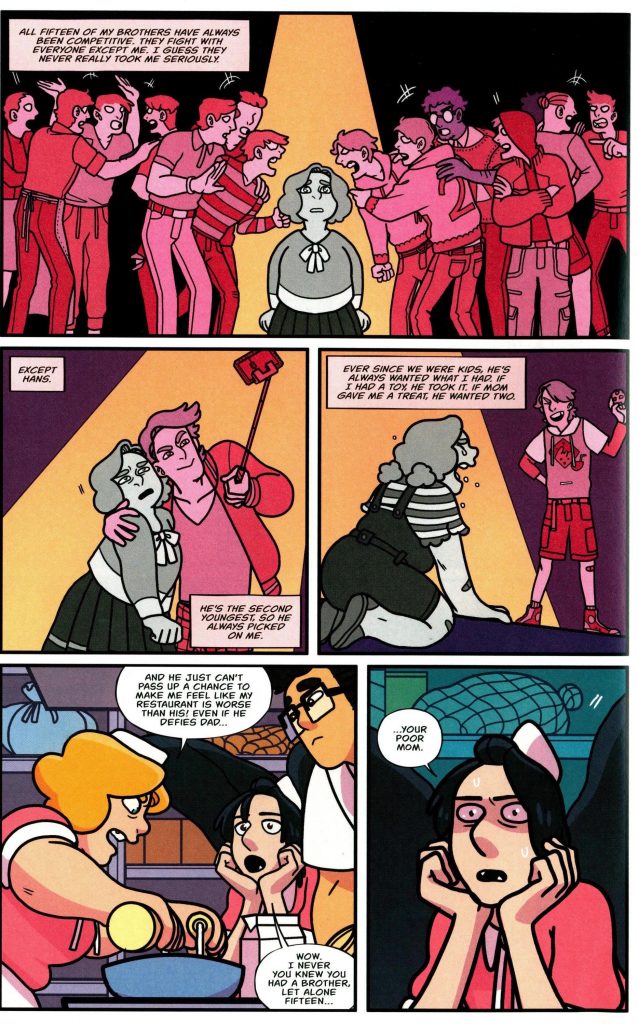 Suzan expressing what we all are thinking. 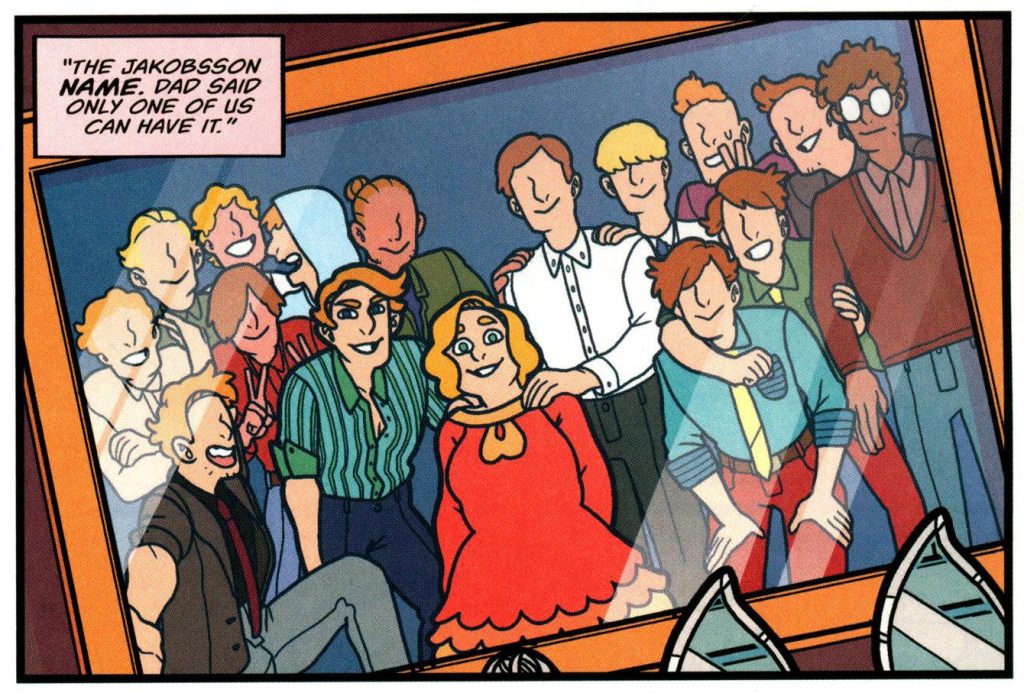 Is-is that Fred and George Weasely?  What are you not telling us, Brianna?

Even though I found the third issue of this comic and missed some important world-building details, I was still able to understand the plot and storyline of this comic, a quality I appreciated after the goofy puppets.  This comic was made published later as a collection – a trade paperback – that I am very interested in reading in full. 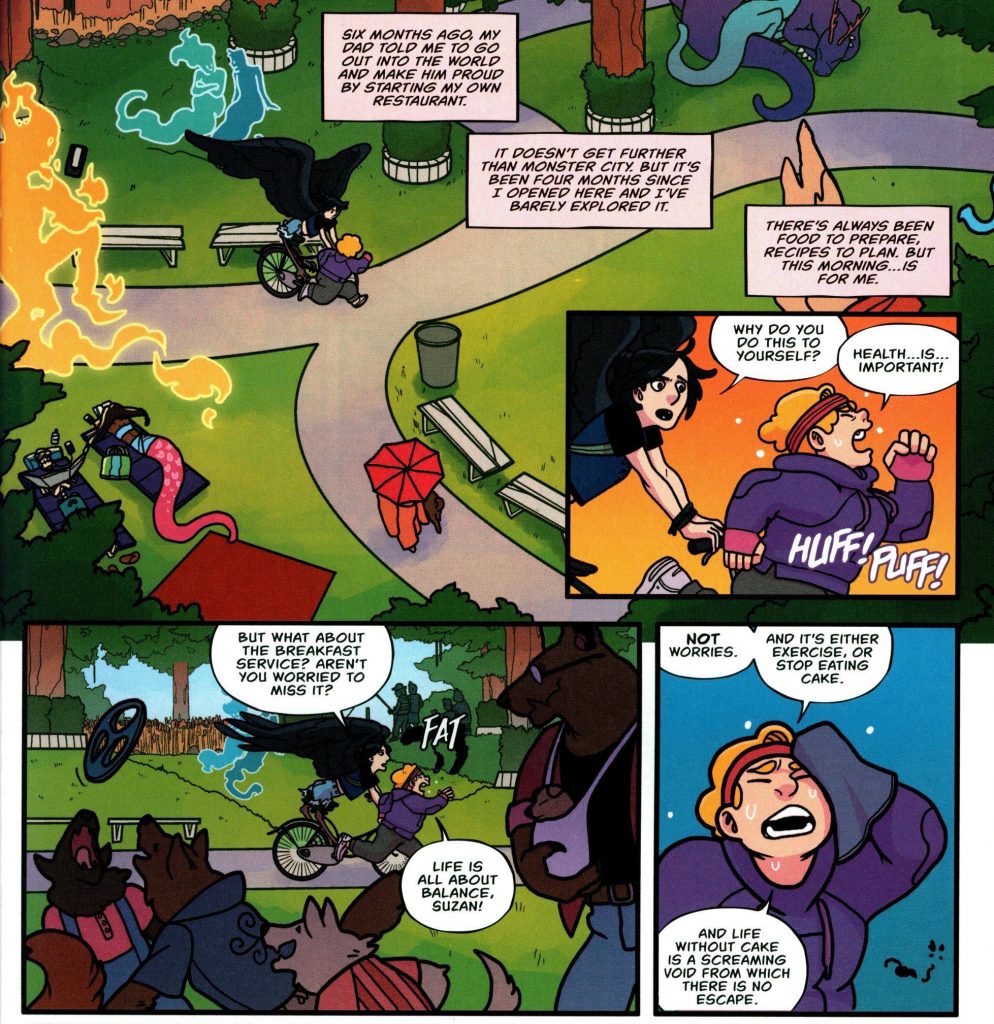 The details of the different kinds of monsters are amazing! And same, Brianna, same. 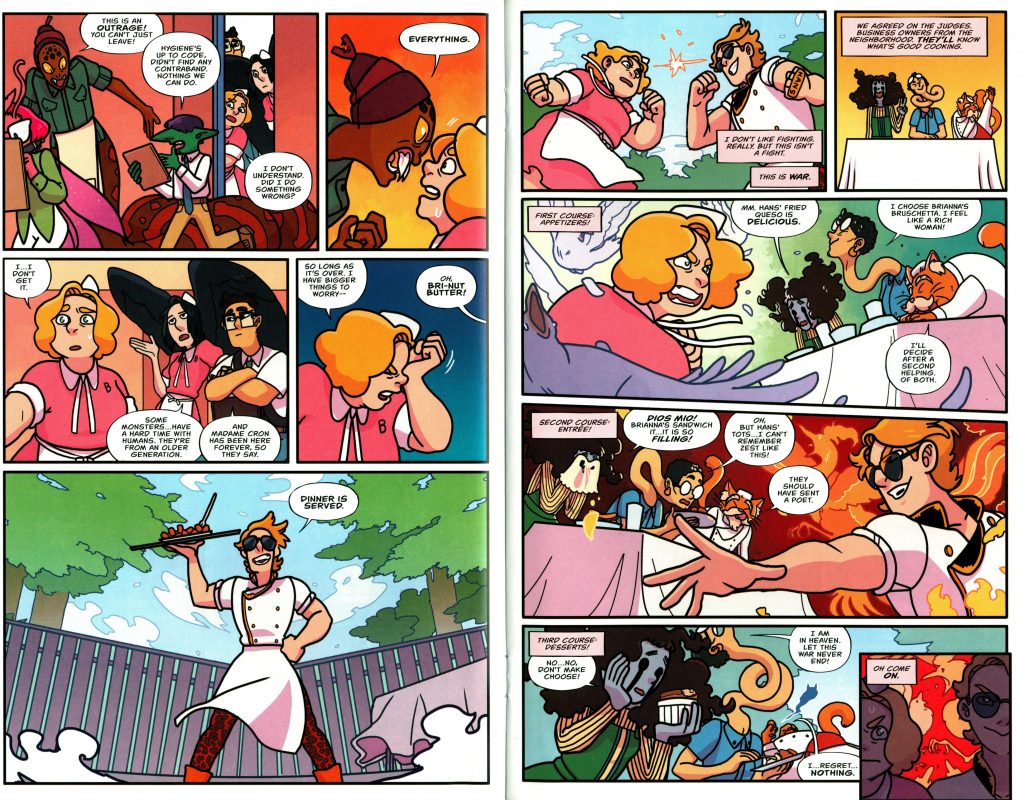 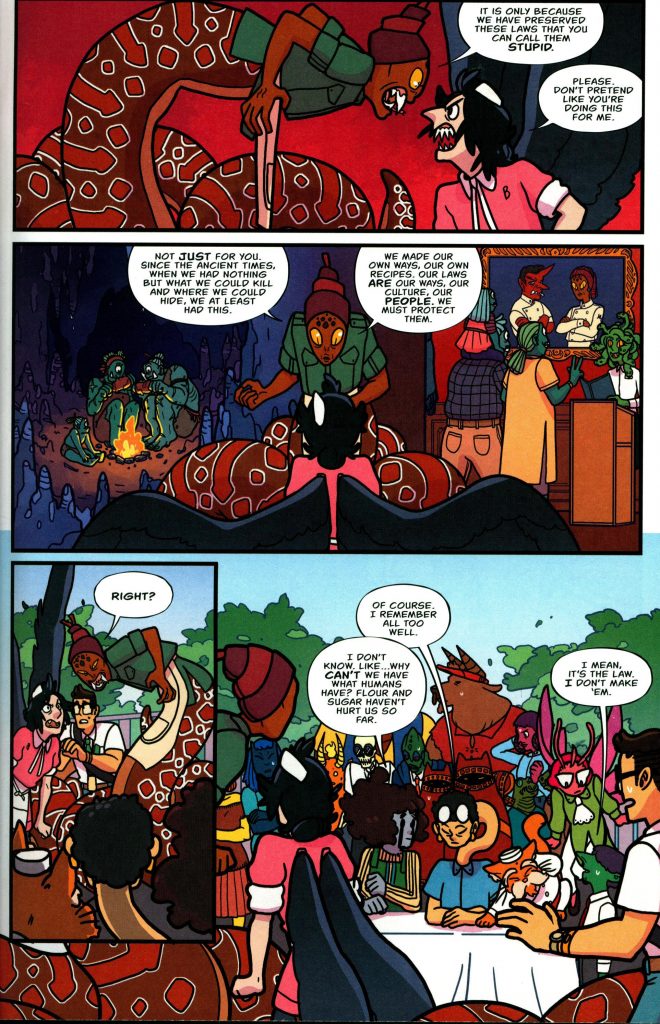 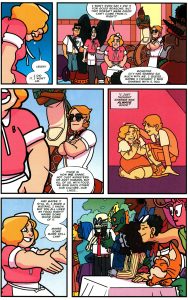 A “kid’s comic” delving into the debate of tradition vs. change. 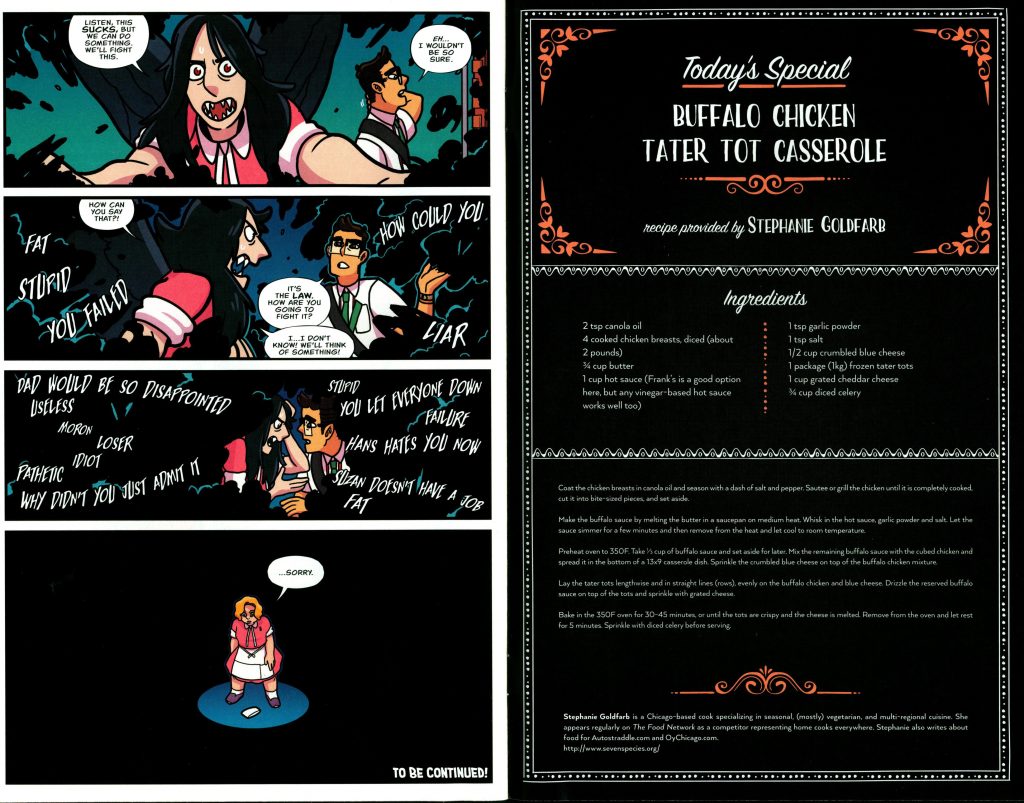 I understand the swallowing void, the artist captured the feeling of crushing self-hatred and shame perfectly.  Maybe the tater tot casserole will help ease the pain…need to try this recipe.

Brianna, her friends, and the eclectic cast of characters are intensely relatable, with real, relevant concerns and dreams.  I admire Brianna for her determination and feel her pain when she doubts her abilities.  This is a great comic for all ages – the colors and brightness entice young readers and everyone reflects upon their own relationships with family and personal aspirations as Brianna finds her own way. 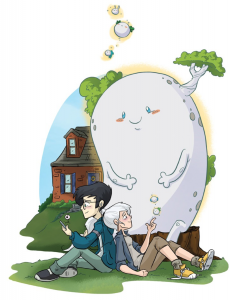 Also in the Brave Chef Brianna volume: a hidden gem!  Katie Cook is the creator of Nothing Special, one of my favorite Line Webtoons!

Finally, right before closing the trunk lid, I found the first issue of the art deco, gothic-stylized The System.  This comic begins with an aptly-utilized quote from William Blake: “I must create a system or be enslaved by another man’s.”  The Masreel-esque style, theme of gritty city life, and fuzzy lines make this comic memorable as it displays systems inherent to an urban environment.  The lives of recurring characters tangle around and within each other.  This first volume has no dialogue, allowing for the concepts to speak for themselves and removing the autonomy from the individuals from the “other man’s” system. First indication of the comic’s fluidity: combination of the screaming woman & the passing train. 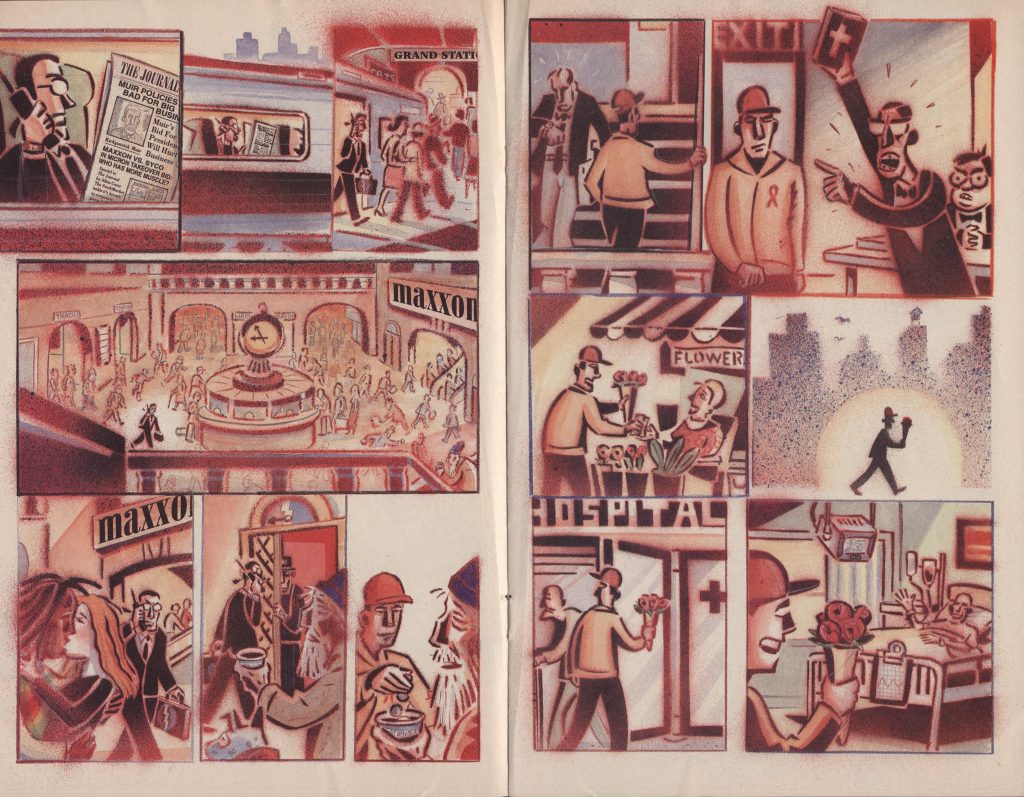 Examining the inner condition of a man through his acts of charity and compassion. 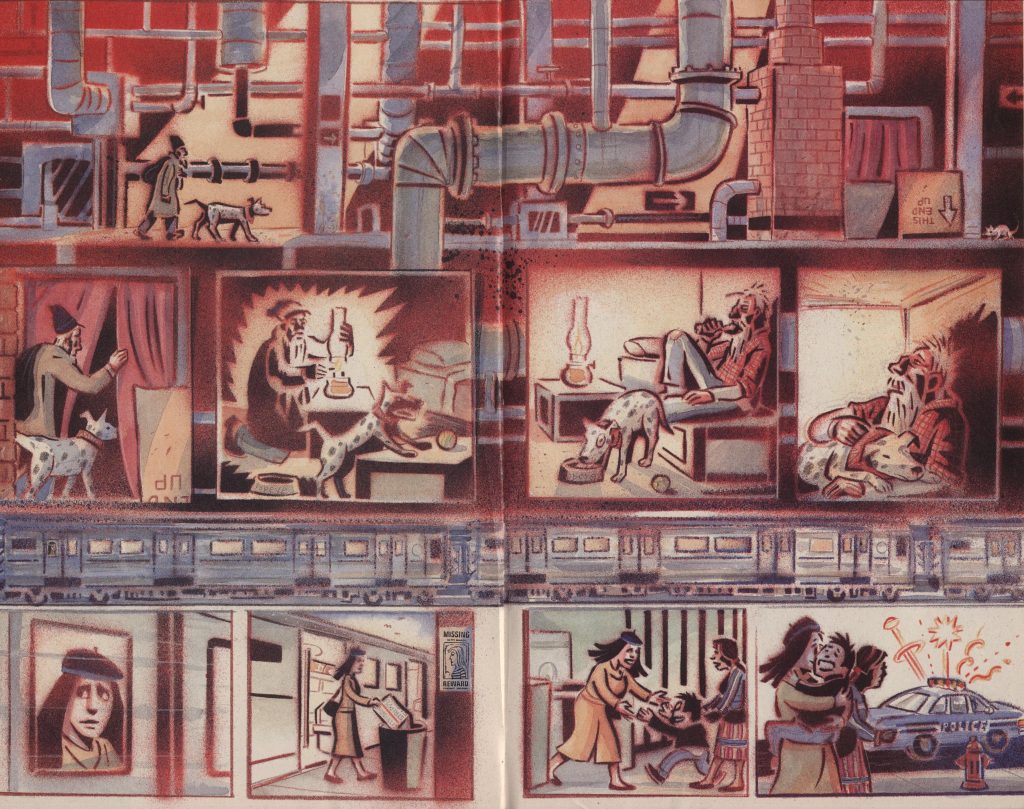 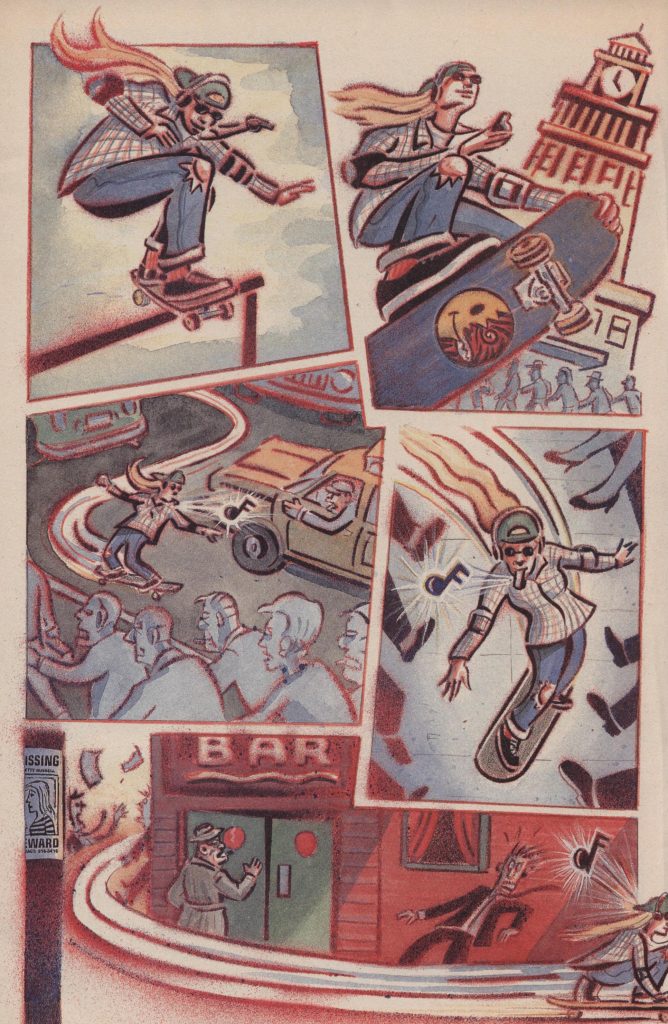 I LOVE the movement within these panels.

What comics have you found recently?  Let’s talk about them!