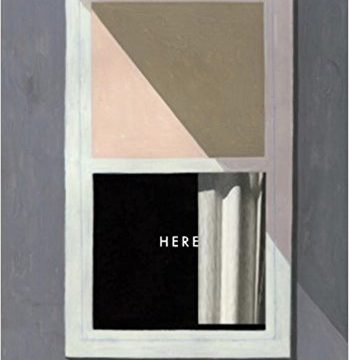 Has anyone ever told you that “sometimes words get in the way?” In some cases, the best option is just to take them out, or at least limit the words that are used. In the graphic novel, Here, that is exactly what was done. Focused on the same corner of the same room, Here tells the story of time and life with mostly pictures from scattered timelines. The only writing there is are dates and sometimes dialogue. You can find a review of the novel here. 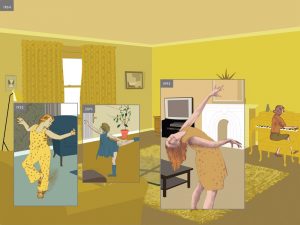 This shows one of the many pictures without dialogue at all, and yet it’s not really needed. Music and dancing are a part of life no matter what time you’re from, and this picture captures that. Words would take away from the imagery. I’ve found that when someone is given something to read, they will focus on that instead of thinking beyond those words. This novel encourages you to think beyond the pictures on the page, and you’ll find the experience much more enjoyable if you do. Everyone dances and sings and laughs and has fun, and this picture says that in a way that words never can. The bright and cheery yellow background, the people dancing through the ages, it’s something that time can’t diminish, and words can’t quite capture.

Speaking of, time plays a very interesting part in this book. Because the timeline of the book isn’t linear, it’s constantly jumping in time from the past to a future time. There is no one day that this room is set in, so it’s hard to determine what constitutes the future or the past of this room, because that one space will always be there, whether there are people there or not. Some of the images aren’t of a room, but include dinosaurs, a house being built, and the far future when that built house no longer exists, yet all of those moments happened. Each is just as important as the next, and throughout time, the reader is shown the similarities between the times and the moments. It shows how moments can be the same, no matter what time you’re in, and that it doesn’t matter whether you’re in the future or the past or the present, you can have memorable moments no matter what. Most of those moments are shown as above, without dialogue and aside from the dates in the corners. 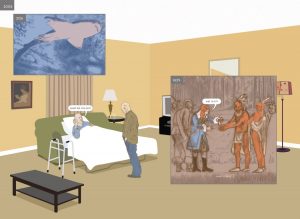 When there is dialogue it’s used to bring together the various times presented in the comic, joining the moments in history to show similarities. In the image to the left you can see someone in the  bed asking “What did you say?” The colonist in the box on the right asks the Native American what it is that he’s holding.   They share the common bond of not understanding each other, and having to ask for clarification. Though the contexts are different, the moments themselves are very similar.