We’ve read some really amazing graphic novels in this class. A Contract with God made me think about expectations from life and the reality of human beings, Watchmen made me consider how time is always running out, how rules and order aren’t always right, and so much more, Fun Home visually showed me the complexity of human relationships and how you can never even truly know the people who raised you. Now we’ve come to our very last graphic novel, My Favorite Thing is Monsters by Emil Ferris. I really like this one. It’s not only visually amazing to my eyeballs, but the story itself is an intriguing one.

This graphic novel sets itself apart from the others that we’ve read this semester. Maybe it’s the true crime aspect of it, the who done it, or the hand-drawn pages filled with such detail one has to analyze each page carefully to see all it has to offer, or the time period, 1960’s Chicago. It’s all of these things combined, but mostly for me, it’s the love for horror. The fact that the main character views herself as a werewolf, and draws the world around her in relation to monsters. I love it. I’m drawn to it on every level. 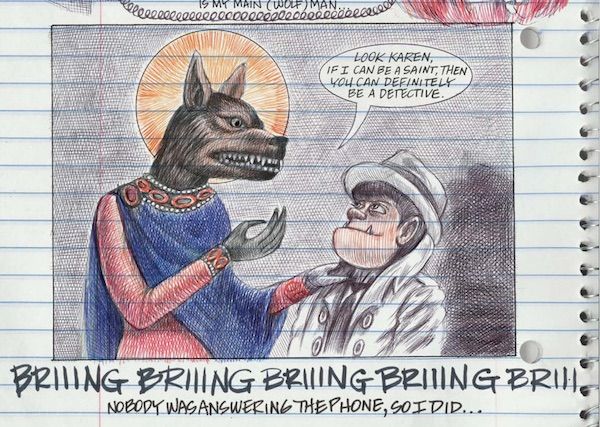 What amazes me is Ferris’ story though. This is her first graphic novel. It was originally 700 pages long, but her publisher split it in half to make the price more reasonable for consumers. She started drawing it during her recovery from West Nile virus. When she was 40 years old she contracted the virus and became paralyzed, losing the use of her right hand. She had to reteach herself how to draw, something she always relied on since she had been a toy designer and freelance illustrator her whole life. After her contraction of the virus she attended the School of Art Institute of Chicago for an M.F.A. in creative writing. Here is where she began her six year journey to creating My Favorite Thing is Monsters. The story originated out of some of her older works.