It’s been talked about in previous blog posts that modern day comics have a tendency towards darker visuals and subject matters; Tlanier’s post is a great analysis. It is undeniable that the movement ‘comics aren’t just for kids anymore’ has had some spectacular results. Many superhero comics have evolved into a literary form that is deep, plot-driven, and fully deserving of the respect it has garnered. But for me, I like seeing superhero comic books that are still for kids, especially as I begin to introduce my little sister to comics. One of my favorite of these ‘kid comics’ is the 2005 miniseries run of Power Pack.

Power Pack tells the story of four siblings, Alex, Julie, Jack, and Katie Power who are endowed with super powers by an alien horse (yeah, it’s definitely a kid’s comic) in order to rescue their kidnapped parents. After rescuing said parents, the four go on to form a superhero team to fight crime.

(It bears mentioning that the mainstream Power Pack comics were very different from this mini-series. The Power Pack comics that are in Marvel continuity had a good number of adult themes; they used to be an outlet for discussing social issues of the time and were fairly mature despite the fact that they featured child heroes. Individual members of Power Pack have also appeared in more ‘adult’ comics. For instance, Alex was a part of the New Warriors for a brief time before joining the Future Foundation. Julie has probably had the most time as an individual hero, appearing in the Runaways spinoff Excelsior and later joining the Avengers Academy, where she developed into one of Marvel’s few LGBT heroes.)

This iteration of Power Pack is a great starter comic for kids. Its storylines may be simplistic, but they’re fun, enjoyable romps. The cartoon-y, less realistic art style and the brighter color scheme are eye-catching and just fun to look at. However, one of Power Pack’s greatest strengths is that kids of a wide range of ages can relate to the characters and their struggles.

For older kids, Alex and Julie-centered comics deal with such themes as first crushes, bullying, and dealing with responsibility. In one issue, Alex ignores his responsibilities at home to go out on a first date, with predictably disastrous results ensuing. In another, Julie deals with mean girls and is eventually faced with the moral dilemma of whether or not to risk her identity to save the girl when she is in trouble. One of my favorite things about that particular comic is that because the girl doesn’t know it was Julie who saved her, not much changes in their relationship; Julie instead realizes that she shouldn’t let bullying get to her. While it is unlikely that any pre-teen/teenager will be faced with rescuing their school nemesis from a super villain or that a first date will end with an inter-dimensional squid monster, it is true that we have all had our own ‘crises’ in these areas, and it’s fun to see heroes go through similar difficulties and end up victorious.

For younger kids, Jack and Katie are excellent stand-ins for their daily struggles. Jack often deals with such problems as no one taking him seriously, or getting yelled at for being hyperactive and leaping into things impulsively. In the same way a kid might empathize with Beverly Cleary’s Ramona, who always seems to be in the wrong place at the wrong time, kids can relate to a character who constantly gets in trouble seemingly through no fault of their own. Katie, the youngest, generally deals with overcoming her fear in some way. Whether it be clowns, Doombots, or aliens, Katie will often show some level of fear before administering a decisive beatdown. I don’t know if it’s because I was a somewhat fearful child, but seeing Katie be afraid of something and then thoroughly crush it was pretty empowering. She’s a nice reminder that one, it’s okay to be afraid of something, and two, just because something is scary doesn’t mean you can’t conquer it.

Finally, one of my favorite parts of Power Pack is their relationship as siblings. It completely captures how siblings often feel about each other; they obviously love each other, and at the end of the day they’ll always be family, but sometimes they can be a little less than pleased with each other. In one comic, Julie notes that when they fight crime they almost always end up in some kind of argument. Pretty much anyone who has had to complete some kind of project with one or more siblings will know exactly what she’s talking about; it seems that brothers and sisters have an uncanny ability to get into squabbles over any and everything. Every time we see the comic specifically through one point of view, we see typical sibling (and oldest vs. youngest) behavior. Alex’s storylines often involve dealing with leadership responsibility and fear of failure; Julie’s include realizing that she is appreciated by others and that she should appreciate her own self-worth; and Jack and Katie’s often go together, with Katie feeling like she is treated like a baby and Jack being resentful of Katie for what he considers to be preferential treatment. It’s clear from the comics that their family isn’t perfect; they argue, they get annoyed with each other, and they have frequent misunderstandings. But at the same time, they’re a cohesive unit. They care about each other, and anybody who messes with one of them will receive swift and fierce retribution. As someone who has two siblings, I’ve always thought they really nailed the sibling dynamic; they realistically portray sibling issues (sometimes so well I can’t help but laugh) while being a positive, cheerful family to read about.

There are definitely quirks to this iteration of Power Pack. As mentioned before, the team did in fact receive its powers from an alien horse. In addition, the children’s parents remain completely oblivious to the fact that their children are superheroes despite the fact that Power Pack doesn’t wear masks and has appeared multiple times on television. (This particular oddity is made all the funnier when, in one comic, Julie’s boyfriend immediately recognizes her costumed siblings when they come to rescue her from Mr. Sinister.) But ultimately, I don’t think that the comic suffers for its goofiness. While it is definitely silly, it often laughs at its own silliness, balancing comical absurdity with clever satire. There is some stuff that’s pretty out there in Power Pack (baby Thor being one of them), but I think they do a good job of including a playful humor that’s accessible to kids of all ages. 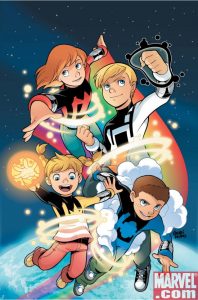 By no stretch of the imagination is Power Pack an epic story; it generally lacks the character development and plot twists that are becoming more expected in mainstream superhero comics. But it is an excellent start for kids who are beginning to look into superhero comics. It’s not just a ‘clean’ comic that children can read; it’s a comic that is specifically written and tailored for kids. It features characters and plots that a wide age range of kids can easily relate to and discusses common ‘kid problems’ in a fun, enjoyable way. While it’s true that comics have flourished in new and exciting ways since they were written with adults in mind, comics like Power Pack certainly still have a place in the medium. In a world of dark, serious comics, it is nice to see a bright, fun story that has low stakes and happy endings. Power Pack is a great series for anyone who’s ready to test the turbulent waters of comic books but isn’t quite ready for the gritty, dark realism of today’s comics.