In Shonen magna, power ups or transformations are a staple of the genre. In these stories the protagonist needs to overcome some enemy or force through his own power. Usually this is the result of training accompanied by breaking the limit of what was thought possible in a certain situation. The best and well known example of this is the Super Saiyan transformation. Goku, for example, ascends past his limitations during his first transformation due to Frieza killing his friend and his plan to destroy the Earth. This transformation grants him access to a brand new power and is able to use it to overcome his foe. However in My Hero Academia this is not the case.

The protagonist Midoriya Izuku, otherwise known as Deku, is born in a society where about 80% of the population has a “individuality”, translated in “Quirk” in the Anime, and he is  one of the very rare few who does not posses one. These quirks manifest themselves around the age of four and throughout his childhood he idolized heroes, wanting to become one himself. His favorite hero was called All Might, an all powerful symbol of justice who saves people with a smile, who eventually passes his quirk to Deku. There is more too this, but for the sake of my argument this is the simplest way of summarizing it.

The reason I make this argument that My Hero Academia breaks the Shonen mold is that rather than having to acquire power through a transformation or special intense training, he already has access to the limitless power that All Might has. However the “breaking of the mold” I’m speaking about is that although he has access to unlimited power he has no way of controlling it. The narrative then becomes how Deku is able use this power and how we are able to see the evolution of this process. 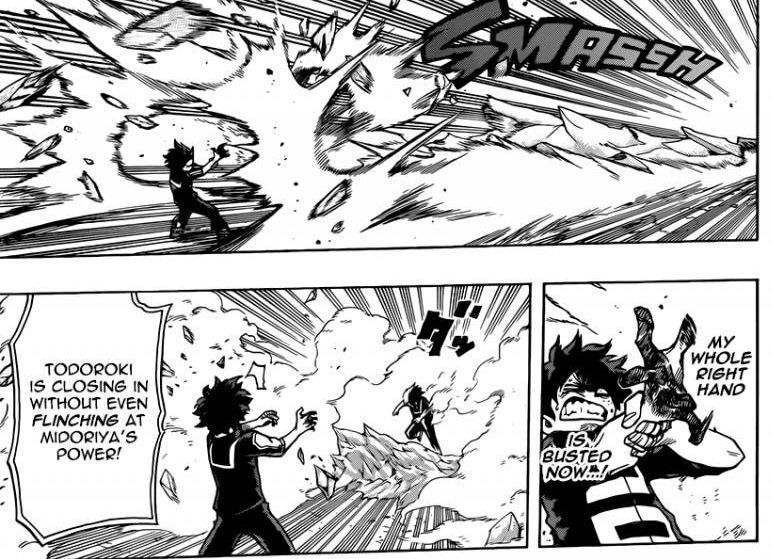 The another reason why is because of the thought process that goes behind this storytelling. On one hand he does have immeasurable power so he doesn’t need any sort of transformation like Super Sayian, but on the other hand he does still have to use this power somehow to defeat any obstacles that come his way. At this point in my reading/watching of the anime he develops a method called One For All: Full Cowl. Where before in he would resort to using 100% of the power in his fingers, breaking them while unleashing a massive shock wave toward his opponent, he now develops the thinking that instead of activating

it where he needs it, but activating it throughout his body to the level that his body can handle which is only 5% of the power. This makes for much more interesting story-telling as the writing becomes more of the pressure to improve yourself rather than finding new ways to get stronger.

All in all I really enjoy the Anime so far and I can’t wait to see how the story develops as it continues. For anyone that is interested in this show, I use Crunchyroll to watch the episodes as they come out and there is also the magna available online at Mangareader. I hope all of you check it out because as I said before it is definitely my favorite Anime out now. Till next time….Go Beyond PLUS ULTRA!!!!