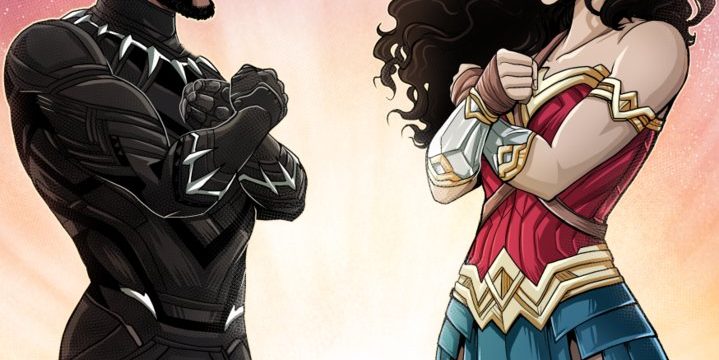 A while back when I was taking a break from studying, I decided to look at some Black Panther fan art and came across this picture. It called Black Panther and Wonder Woman Empowering Heroes and it was made by LucianoVecchio on deviantart. It is beautifully drawn and the artist himself has wonder art. I reccomend checking out his gallery. I made it the page picture for this post but here is the full picture: Again it is beautifully drawn. But that’s not what striked me the most about this picture. It’s what he said about it. It’s so well thought out that I’m going to put the entire quote in:

“Both T’Challa and Diana are the superheroic and political ambassadors of isolated secret nations where oppressed social groups thrive and make healthy societies that work on their own.

Themyscira and Wakanda are similar narrative devices to turn the tables on different real world inequalities, each focusing on gender or ethnicity (though BP does a GREAT job of representation with gender relationships and female empowerment).

As a tiny note, they both do the arms crossed sign and I felt the link between both was intentional.

And most important, they both are game changers in the entertainment industry, putting underrepresented demographies on leading roles in a genre that is all about empowerment, and proving that representation is needed and wanted.

They’re not equivalent, their fights are not the exact same, but they’re akin and I can totally imagine them as allies and supporting each other at the UN meetings.”

I never thought about how similar they were until this post. Yes they fight and represent different things but their existence is important, especially in the age of Trump, white superemacy and other forms of bigotry. I feel that the fact that these movies came out at all not only feels like a miracle(especially in Black Panther’s case) but is also a middle finger to what is going on. The existence of their movies are a sign of rebellion stating that this fight is far from over and a sign of hope comforting those who are scared of the future. That’s what’s so empowering about them. And that’s well wonderful.