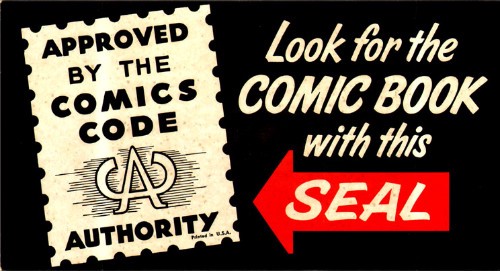 In April, 1954, Frederick Wertham published his book called Seduction of the Innocent which changed the realm of comic books forever. Wertham was a respected psychiatrist who questioned the morality of comic books. According to Comic Alliance, “[Wertham] wrote several studies about the harms of racial segregation, to the point that his writings were used as evidence in the landmark Brown v. Board of Education case…”. He had issues with how comics portrayed overly violent content as well as other moral issues. One of the issues he disapproved of was the oversexualization of women in comics.

Unfortunately, one of the issues he had was with homosexual subtext being included in comics. So while many of his calls for change were helpful to the comic community as a whole, pushing heteronormativity was not one of them.

As a result of the uproar from Wertham’s book, the Comic Code Authority was born. The Comics Code is known as “the bible of comic book censors” according to the Comic Book Legal Defense Fund. They targeted “problem areas” in comics which they identified as extreme violence, horror, crime, sex, and some other areas including slang and colloquialisms. Comics that received this seal of approval were those that were “suitable for young readers”.

While there was no legal obligation to get this approval to sell comics, it was widely sought after in order to keep a consistent audience. There were many “underground” comic series that stayed around, but they quickly fell off the mainstream due to the social upheaval Seduction of the Innocents stirred up.

If you’re looking for a recent comic with this historic seal, you’re sadly out of luck. By 2001, Marvel had abandoned the seal which left only three companies that still utilized it: Bongo, Archie, and DC Comics. Bongo got rid of it in 2010 and DC and Archie soon followed in 2011, ending this 60-year censorship standard.