In 2019, Disneyland and Walt Disney World’s Hollywood Studios opened their newest themed land: Star Wars: Galaxy’s Edge. The park took place on the new planet Batuu, and is considered canon in the current Star Wars stories it’s been referenced in at least one movie (Solo), and part of one of the new Thrawn books. But of course, as with any Disney Park, they had to create a story for everything in it, and to do this, they created a comic series.

Aptly titled, Star Wars: Galaxy’s Edge gives background to a plethora of the locations in the park, and gives a backstory to a lot of the more questionable elements. Why does Dok-Ondar have lightsabers from famed Jedi? Why does he have a Sarlacc pit? What’s up with those blaster burns in Oga’s Cantina? Why is Hondo so great? The comic gives an in-universe reason for all of these, and are all things you can see when you actually go to Batuu. 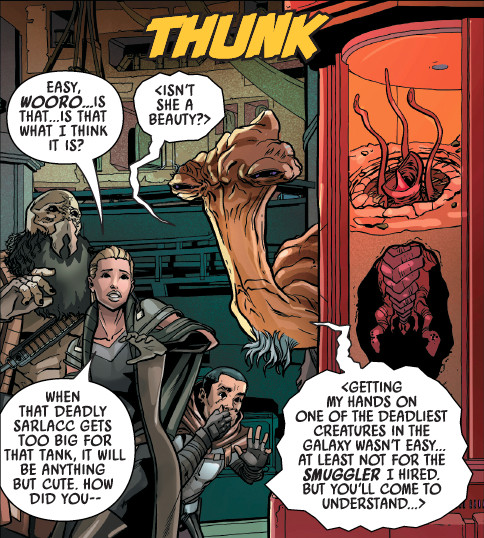 For example, in one issue, Dok-Ondar tasks famed smuggler Han Solo to collect a baby Sarlacc (seen above). Of course, things don’t go according to plan, but when you go to the park, and enter Dok-Ondar’s Den of Antiquities, you can find this Sarlacc in a corner of the shop, in the same cage as he is in the comic (seen below, picture by me). There have been other comics based on the Disney Parks, there was a Dreamfinder comic based on the character from the beloved “Journey into Imagination” ride, a Haunted Mansion comic, and somehow an Enchanted Tiki Room series, but none of those are about a land, just a ride. The Galaxy’s Edge comic does something no other comic has done, in faithfully recreating the park, and preparing you to step into this immersive world. The comic isn’t necessary to understand what’s happening in the park, but the explanations it gives make the park feel more alive, make it feel like it has a history.

Of course, the park was built before the comic was made, but seeing these images from the comic in the park is something else. It’s like how watching a superhero movie makes the characters look real, but in this case, it’s something tangible. You can SEE the DJ droid from the comic, you can reach out and touch the Sarlacc, you can taste the Ronto Wraps they mention. Overall, it’s something that’s an amazing experience, and I’d recommend reading the comic first to get it (once the pandemic ends of course).

A final point I’d like to bring up, is if Disney might to something similar for the upcoming Avengers Campus land in Disney’s California Adventure. Of course, this land is based on the Marvel Cinematic Universe, but there will be continuity differences, so will they make a comic to support it? Will they do regular books? Or will they just assume visitors don’t need to question it, and just want to see Spider-Man swinging above them while they enjoy an infinity stone churro? Only time will tell.