As a child, I had an obsession with a particular comic called Archie. My father first introduced it to me around the age of 9 or 10 and I instantly became hooked. Archie was something my father and I bonded over, due to the fact that he had read it as well when he was younger. I found myself reading the comic over and over again until the next issue was bought. All I wanted was to continue reading about all the adventures Archie, Betty, Jughead, and the rest of the crew would go through.

This particular image shows the many characters and friends that Archie shares. Each has their own mini storyline to go along with the series and there are even a few that have their own spinoff series.

Upon researching this comic, I was surprised to find out that Archie Comics first debuted in December 1941 in Pep Comics and became a headliner for MLJ Magazine (which eventually changed its name to Archie Comics Publications). What struck me as surprising was the age of these comics. Maybe it was because I was a kid when I first read them, but it never came to my realization that “Archie” was technically older than my father.

Several spinoffs have been made, and it is still a very popular book amongst comic lovers. In fact, in 2010, Archie Comics introduced its first gay character, Kevin Keller. The first issue sold out immediately, which meant that the comic series had to order its first reprint ever. 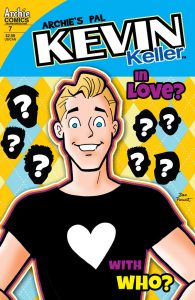 Due to the popularity of Kevin, Archie Comics gave him his own solo series and has since continued sharing his storyline with fans everywhere.

How has Archie continued to be such a popular comic amongst many generations? The answer is simple. Riverdale, Archies hometown, is viewed as a safe haven amongst readers. Nothing violent or “bad” seems to ever happen here and can be seen as the ideal “American” town to live in. It is a warm and welcoming area that encapsulates readers, making them feel as though they are one with the town. Archie, his friends, and his hometown are idealistic for many readers in America, which is why it has become apart of the culture. Archie and his friends are sometimes viewed as the epitome of the American teenager. They helped shape the quintessential characteristics of a friend group, which has readers aspiring to reach this level of “friendship goals.” These simplistic characteristics is what has assisted Archie Comics in becoming iconic in America’s literary culture.

Archie, in my opinion, is a true American comic book series. It has been around for decades, providing entertainment for generations of families. Due to the increase digital content and less desire for print, Archie Comics has provided access to Digital Comics such as “Archie Unlimited”. I find it both interesting and exciting that the series is able to adapt to the digital age in order to possibly attract a younger generation of readers.