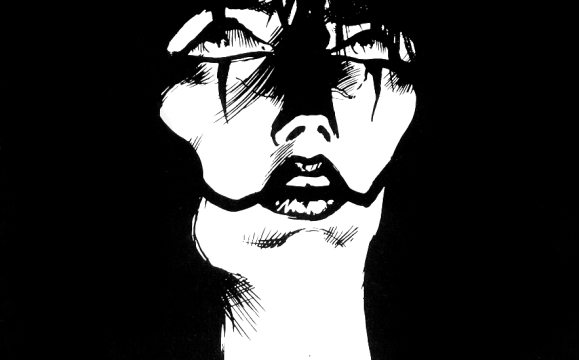 Maybe you’ve seen the movie. Maybe you’ve only heard about the movie, heard about how it was Brandon Lee’s last performance after a fatal gun accident on set – a true story that only reinforces the tragedy of The Crow. But before any of that, James O’Barr penned the comics, a graphic novel that traces Eric Draven’s revenge rampage on the gangsters who raped and murdered his fiance. The movie trailer actually does a pretty good job of representing the plot and mood of the comics:

At first, I was drawn to The Crow for the pure aesthetics. Eric Draven looks, and to some extent, is goth (before the afterlife, his human character was a member of a rock band). The comics feature pages dedicated to lyrics from The Cure and Joy Division, alongside harrowing images of Eric in pain or contemplation, or both. After reading the story, I was invested in The Crow for its honest depiction of a man in love and pain, in pain because of a love so deep it brought him back from the dead. The Cure’s “Boys Don’t Cry” would have been a great track for the soundtrack, if they hadn’t written another song purely for The Crow (the soundtrack of the film deserves its own blog post). But after settling into The Crow, after claiming it as my all-time favorite movie/comics for half a decade or more, I’ve had time to realize that, like all things, it isn’t perfect. Especially after learning to analyze media through a feminist and gender studies lens, I’ve realized The Crow may be a goth love story, but it’s still a gendered love story. And like other comics discussed on this blog, although it may challenge gender in some ways, it reinforces gender in other ways.

Let’s start with the positive, visualized in these two pages.

There isn’t a lot of action happening here – many pages of The Crow are panels of artwork or different depictions of Eric, Shelly (his fiance), the city, or other aspect pieces. The first image is more contemplative (read: more feminine). His Crow makeup looks more glamorous than scary, as it does in the second image. The artwork style is soft and sketchy to match the mood. Eric’s position is more relaxed, laying down with a pillow. He could be mistaken for a woman easily, with his makeup and hair. Even his arms aren’t as defined as they usually are (you can compare how his veins and muscles are exaggerated in the other panel).

This second image shows the other side of Eric – after he wallows in his pain, he goes out for revenge. His aura becomes much less contemplative and more aggressive and intimidating. His hair now appears spikey. His face and makeup are harder and more defined, as is the rest of his body. He’s wearing a leather jacket and boots, costuming often associated with villains or bad boys. His hands are held in fists at his side, ready for action. The positive here is they are same man. Eric wears the makeup unforgivingly, he wears his hair long, he really feels his emotions, especially his pain. That, I think, is the most important of Eric’s genderbending qualities – Eric does not fall prey to the ‘boys don’t cry’ mentality. The Crow, at its heart, is a story of pain and grief, and you feel Eric’s emotions along with him, despite the fact that he is a man and our culture, especially before the 21st century (The Crow first appeared in 1989), teaches men to hide their emotions and pretend they feel no pain or softer, ‘girly’ feelings.

Eric’s character is a double-edged sword for gender studies. Though he breaks the stereotype of men concealing their feelings and many pages convey just how deeply Eric loved Shelly and how he wasn’t afraid to voice those kinds of emotions, the love displayed in The Crow has its faults. Look at this page from the trade paperback version released from Kitchen Sink Press.

The only word of the first panel is “mine” and we see the back of Eric. This is a good representation of the first gender issue of the comics – Eric frequently looks back on memories of Shelly in a way that establishes her as “his.” As Lauren M. E. Goodlad puts it in her essay on androgyny in The Crow, “Eric cherishes a romantic ideal that is conventional in the extreme” (95). Shelly becomes an object of his love and pain; we see her painted as an ideal woman and only ever see her in fragmented scenes – memories that have clearly been altered through Eric’s mind (the actual crow of the graphic novel, who guides Eric from the afterlife, interjects these scenes to tell Eric to stop relieving previously happy memories – though he never does).

In the bottom panel, we see how pain has transformed Eric. Ideally, Eric would be the same man before and after experiencing pain – he would just be a man having emotions. Instead, his intense pain literally changes him from Eric to The Crow; pain is inconsistent with a masculine identity so the identity must be transformed instead. He wears makeup and tight clothing as The Crow and his longer hair is highlighted in the art style. The makeup especially establishes how pain transforms a man into a more feminized version of himself (to clarify, Eric wears the makeup throughout the action of the graphic novel, but he does not wear the makeup before his death as we see him in his memories). Pain is a female emotion. Men do not feel. Therefore, to express his pain, Eric must feminize himself.

Simultaneously, Eric reinforces the hypermasculinity of violence. The major arc of the story is a revenge plot fueled by love. Eric views Shelly as a thing to be protected and defended. His revenge is especially violent, with intricate plots to pay back every one of the gangsters. The gun, bullets, and large print of the word “immolation” (to kill or destroy especially by fire, Merriam-Webster) are only a few examples of Eric’s destructive portrayal. The comics have frequent depictions of death and blood, usually involving Eric. These are the consequences of male pain. Eric does not deal with his pain in any healthy manner. He fixates on fantastical ideals of his past female love and focuses on violence, to himself or others, to alleviate his pain (which, by the way, doesn’t necessarily ever get alleviated through these means).

At first glance, Eric Draven is a androgynous goth god who allows himself both pain and love. Eric Draven is a cult role model for men who want to wear their makeup or express their emotions freely. But his story is shrouded in sexists ideals, from conventional, hetero-normative love to masculine rage and violence. These comics provide some level of male emotion but they don’t necessarily go beyond that.

Again, I think it’s important to note that the goal of this blog post was a feminist reading. I don’t think these are the things that would stand out to a first time reader. In my personal opinion, I think Eric’s violent revenge is justified for what happened to him and his fiance, even if they do contribute to hypermasculinity. It’s important to realize the comics are a few decades old now. In the 1990s, a man wearing makeup and being in his feelings every other panel was probably quite modern and androgynous for the time. The art and story-telling style could also be factors in discussing how Shelly was portrayed – maybe if we were able to see her outside of Eric’s filters of the afterlife, pain, and changing memory, she would be a stronger character. I also think it’s necessary to note that James O’Barr lost his own wife and so his own pain is written into these comics. Take this feminist review with a grain of salt – as with everything, there are many ways to read The Crow. This is just one, from a fan who has had many years of reading and viewing and thought it was time to turn an academic eye on the graphic novel.

P.S. This website appears to have uploaded scans of the trade paperback, the version I own and read. I compared and it seems exact – I don’t think there are any missing pages (though I will say there is something about the physical copy that is just so much better).