What makes an art style stand the test of time?  How does a stylistic choice within different forms of media transition from a “fad” to widely-used and respected form?

Recently, while exploring downtown Fredericksburg, I stopped into a local thrift store and noticed a 2 for $1 bin of a large variety of different comic books.  I previously had never owned a comic book in my life, and the thin, colorful volumes wrapped in aging plastic sleeves drew my attention.

After slowly flipping through the stack, I found a book entitled Ms. Tree’s 1950’s Three-Dimensional Crime, Volume No. 1 of July 1987 & part of the Renegade Summer Special by Renegade Press, toward the back of the bin.  This volume included three short stories entitled “Secret Agent From New York,” “Johnny Dynamite and the Hundred Cadillacs,” and “Johnny Dynamite in The Fixer’s Mob,” along with miscellaneous filler pages which either promoted characters or purely experimented with the 3-D Ray Zone format.  On the pages slightly-browned with age, dark brownish ink was accompanied by sections of light red and blue echoes of images. 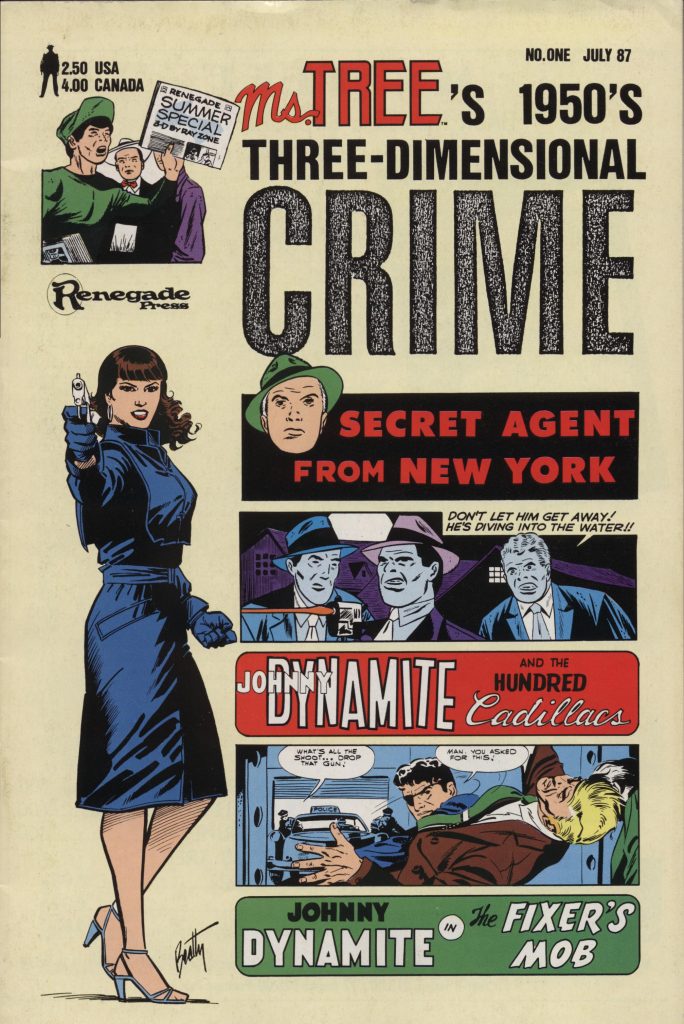 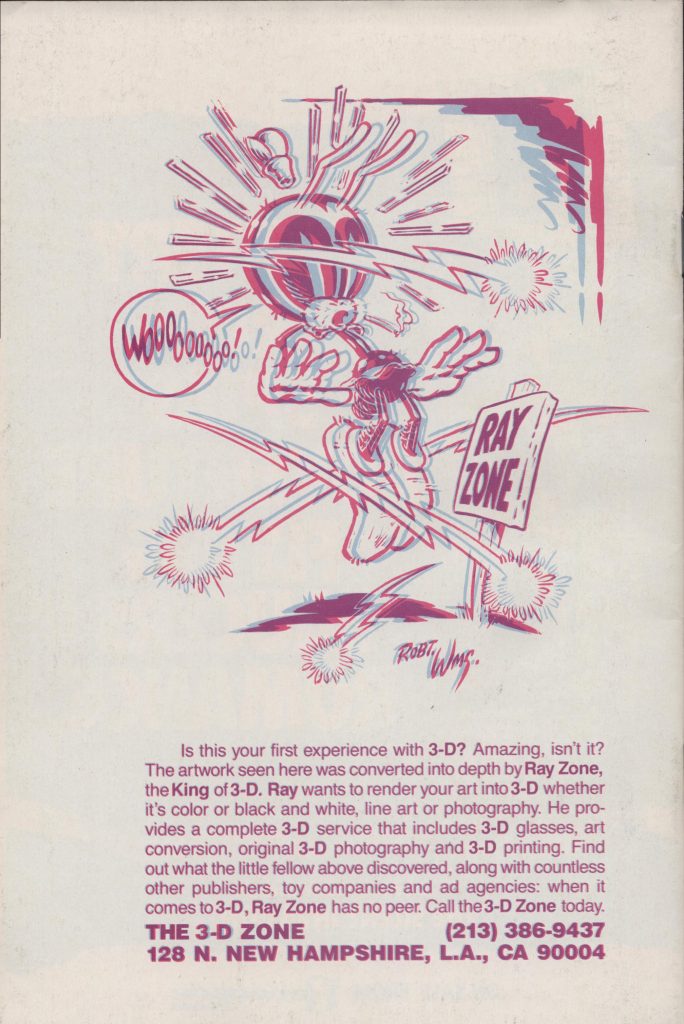 The front and back cover

On a whim, I decided to purchase the book.  I considered it a fascinating oddity, my interest in thematic film noir notwithstanding.  Even if I didn’t read the volume, I could cut it into pieces or use it as an overlay for other scraps of paper dug up from some old National Geographic magazine or newspaper (this is coming from artist who enjoys finding interesting publications to use in her collages).

Below are some of my favorite pages from Ms. Tree’s.  If you have a pair of traditional 3-D glasses (red-and-blue lenses, with the blue lens over the right eye…unfortunately, modern 3-D glasses that you might get at an IMAX movie from your local theater WILL NOT work), the images below should appear almost as though you had the paper version of the book in front of you.

BUT before then…5 Tips for Successful (and Enjoyable!) 3-D Comic Reading (developed from personal experience)

Pace yourself and be sure to take plenty of breaks. Looking through red-and-blue lenses for long periods of time may cause undesirable symptoms, including, but not limited to, strained vison, pain in the temples and/or the back of the skull, nausea, dizziness, and general discomfort of being.

Keep your reading at a distance. Although it’s a wonderful thing to be immersed in a story, don’t dive too deeply – and by that, I mean don’t keep the pages too close to your eyes!  Crouching over and peering down at a comic or holding the volume close to your face might seem appealing, but doing this for long periods of time may cause discomfort (see point above).  Propping pages up 1-2 feet away from you causes less strain on the eyes and allows the 3-D effects of the volume to fully work their magic.

Take your time. Be sure to examine panels closely and carefully, keeping an eye to layers of detail and planes of existence.  Does the placement of characters within a scene give the panel more meaning?  Viewing a story in 3-D involves a greater perceived depth of space within frames.  Pages may contain more than initially meets the eye…

Make yourself comfortable. Grab a snack, a cup of hot tea, a cozy blanket…anything and everything that helps you relax.  Providing physical comforts will enhance your reading and analyzing experience as you keep your stamina and drive at a maximum level.

Have fun! The most important thing about reading 3-D comics is to enjoy yourself.  Grab a friend and an extra pair of 3-D glasses and read your awesome book together! 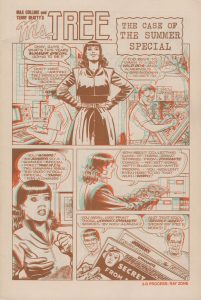 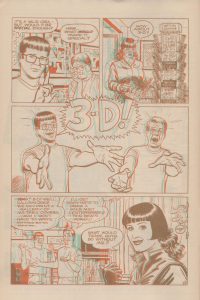 Breaking the fourth wall?  The artists and publishers simultaneously promote and make fun of themselves as the depicted characters decide that 3-D is the answer to making this volume special. 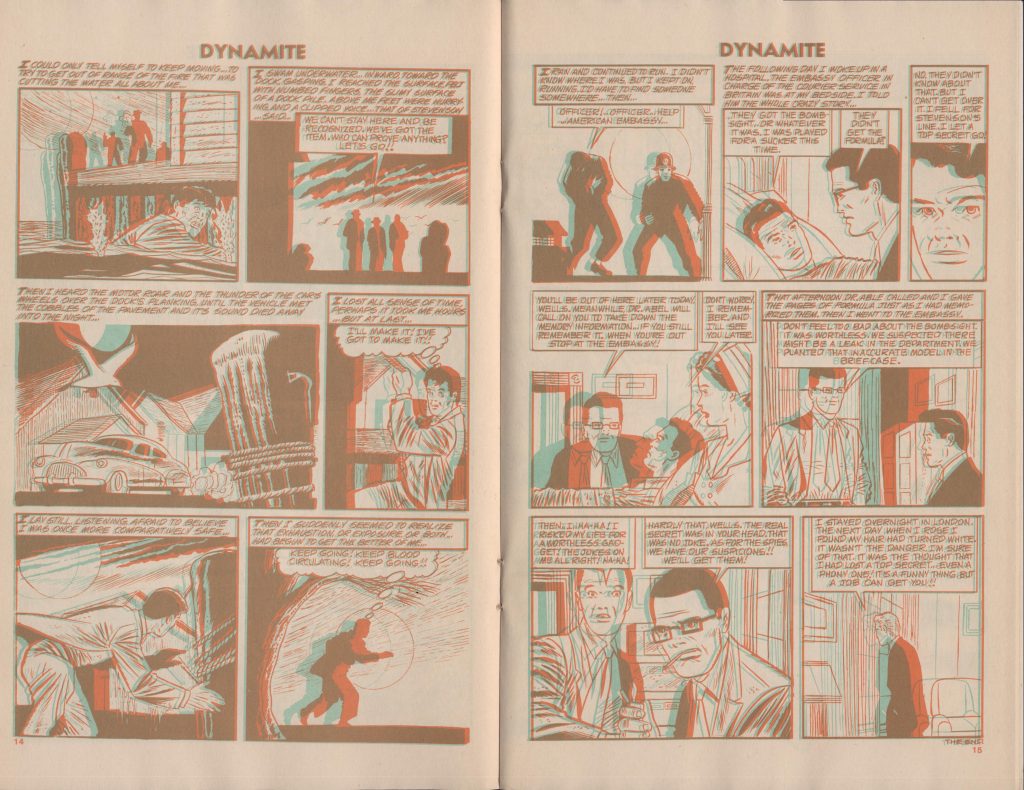 In taking a 2-D comic and converting it to 3-D, like this one, problems arise if the red and blue layers are spaced too far apart.  How well a conversion is conducted varies from panel to panel.  The white bird on the left properly flies off the page, but the man running in front of the moon stumbles. 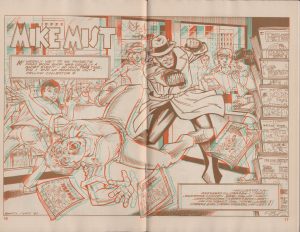 The comic character Mike Mist punches a guy because he damaged his copy of “Johnny Dynamite.”  A shameless self-promotion a la Renegade Press. 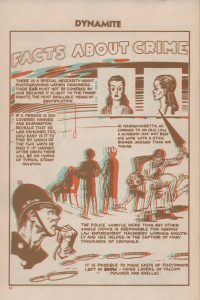 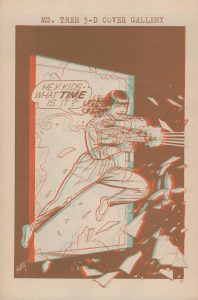 Left: a bizarre factual page in the midst of fictional detective work.  Right: one of many 3-D covers promoting the character Ms. Tree, plus beautifully-rendered shattering glass. 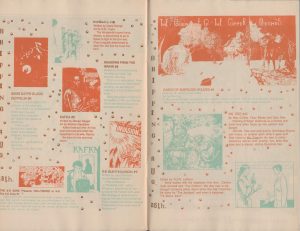 I made the mistake of looking at these promotional pages with my 3-D glasses on…you have been warned. 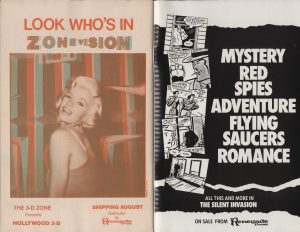 Left: translating photographs into 3-D looks cooler without the glasses on.  Right: the variety exhibited by Renegade Press, making this special seem mundane.

I admire this small collection of 3-D comics owned by comicKkrakK.  The metallic and surreal effects within Mr. Monster and Merlin Realm are gorgeous, adding a sense of depth and emphasis that enhances the enjoyment of each comic.  Keep those 3-D glasses on – you can enjoy comicKkrakK’s collection on your electronic screen!

As a stranger to comics, I wondered about the popularity of this type of comic.  After several hours of attempted research on the topic, I came up with very little information.  The medium of 3-D comics did not (newsflash!) withstand the test of time.  Popularity for these volumes began in the 1950s with the dawn of the 3-D film, faded substantially, and spiked again in the 1980s, only to fade away once more.  For more information about the history of 3-D comic books, visit the 3-D Film Archive. This was the only good source that I could find on the topic, and it exits partially because of its association with the parent topic – an archive of 3-D film.

In my research, I found a lot of information about using 3-D modeling (CGI-esque design and forms) within printed comics.  For more insight about this form of comic, read this article from 2009.

3-D comics requiring red-and-blue glasses exist as a kitschy “fad” inspired by the success of the concept within film.  I believe that their lack of long-term mainstream popularity stems from needing a pair of glasses to read even the text within panels, plus the fact that I needed a disclaimer about possible discomfort from viewing volumes for too long really shows how these comics are not practical or even, in some cases, healthy.  The 3-D effect is not always perfect – heads float off the page if the effect is not applied properly, utilization in strange places within the frame don’t add a significant amount to the overall work to warrant its use at all, and adding 3-D to text occasionally decreases readability.

Reading 3-D comics may feel like this – disorienting, pointless, and useless, particularly if the 3-D effect is not carried out properly.

It is worth noting, though, that I greatly enjoy this multimedia concept.  I find it daring, interesting, and innovative.  Perhaps the negative straining effect of the medium could have been alleviated if more artists created and more publishing houses published 3-D comics.

In any case, 3-D comics provide a window to examine both space and perspective within comics, as well as methodology for creating effective stories and strips.  In order to immerse the viewer, comic design often strives to make images relatable and real.  The (three) dimensionality of this medium, when red, never leaves a reader blue.

2 thoughts on “I Red Some 3-D Comics, and They Blue My Mind”