For anyone who grew up reading the Funny Papers, or the Comic section, or whatever you call those two pages in the Sunday paper dedicated to comics, there is a group of kids that has become very familiar. They are the group called the Peanuts, including Linus, Lucy, Sally, Schroder, Peppermint Patty, and, of course, one Charlie Brown.Oh, and you cant forget Snoopy. 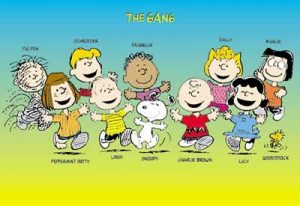 The picture above shows the kids as we all know them today. The thing is that the Peanuts comics have been around since October 2, 1950. Like most things, comics that have been around for a while tend to evolve. This is absolutely true when it comes to Charlie Brown and the gang. In fact, before they were the Peanuts, the comic strip was entitled Lil’ Folks, and it look quiet a bit different than it does today.

Over time, both Charles Shultz’s Skill and Still grew and changed, and that meant that what he created over the years was always changing. Charlie Brown went from being a kid with a football shaped head to a mellon head with an…interesting…head of hair.

For many long running comics, the look of the comics does change as the time passes. For instance, Garfield use to look like this

But Charlie’s look didn’t just change over time, His character, and the characters around him did as well. In the first few comics, Charlie Brown wasn’t such a “Good Man”. in fact, he was a bit of a smart-aleck. He likes to pick on others and is a tad bit annoying.

But as time goes by, he becomes more of the lonely and existential child that we know he is today. There is one Peanuts comic out there that is known as the turning point for Charlie Brown. Even though it was only published four years after the first Peanuts comic, Charlie Brown already looks more like himself.

This strip had none of the humor that the previous ones did. Most comic strips at the time had to be either funny or action packed. So I can imagine this one sticking out quite a bit when it was published. But it does really set the tone for what the Peanuts became. The comic became deeper and more meaningful after this “turning point” and, in my opinion, that is why it has stuck around for so long. It means so much to people because this new Charlie Brown is someone that a lot of people can relate to. If Shultz had never switched things up and let Charlie Brown grow and evolve as a character, we would still be stuck with this guy:

and no one wants that.

To see how the Peanuts evolved over the years, Click Here