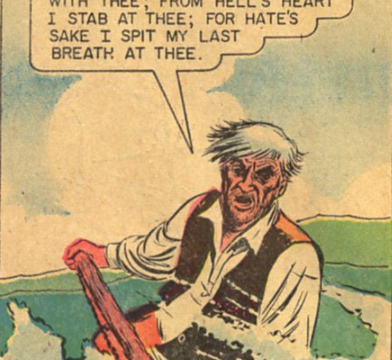 Ever since beginning my voyage on the Pequod (aka the first day of my senior seminar on Moby-Dick), I have seen sightings of the White Whale everywhere I turn. From following a “great white Chevy” to school one morning, to seeing a giant sperm whale painted on the wall of an elementary school on election day, to even finding a Twitter account called, @MobyDickAtSea where quotes from the novel breach into one’s Twitter timeline. While all of these sightings were very exciting, one instance of encountering an adaptation Moby Dick still stands out in my memory.

It all started on a Saturday night when I was babysitting for my high school biology teacher. When Shandelle and Scott came home, the kids were already sleeping, giving us time to catch up with one another. I, naturally, started talking about my Moby Dick class (because it’s always, always! on my mind), and Scott interrupted me to say, “Wait. I need to give you “Rex Nocturnus’” Um, what?! Scott went to the bookshelf and returned with a small, black and gold, book that looked more like a leather-bound journal than a published comic. Scott then explained to me that Scott supported this comic on Kickstarter in 2013 and had received his copy for supporting the dream of Scott K. Monteiro and Liam Boyle, two guys from Boston who wanted to write a comic. After simply flipping through the comic I saw immediate connections to Moby-Dick and to other iconic works like the film, Jaws. 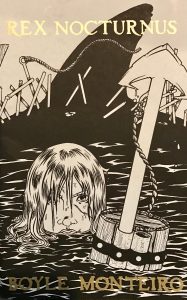 The basic story line is this: After losing her left arm and her father to a shark attack, Charly has pledged the rest of her life to destroying the beast: Rex Nocturnus. Rex Nocturnus is no ordinary shark– he’s a great, black shark who may be “eons” old and has been described as having the reputation of “an immortal God.” The parallels between “Rex Nocturnus” and Herman Melville’s classic tale are clear. Charly is a female version of Captain Ahab (if you don’t believe me, just keep an eye out for the double-barrelled harpoon gun that she straps onto her stub arm!), and Rex Nocturnus is the infamous Moby Dick.

After reading the comic, I wanted to know more. Moby-Dick is a massive novel and part of its genius lies in Melville’s expansion of time while on the voyage. It is a long voyage on the Pequod before Ahab’s crew encounters Moby Dick, seven months of storytelling on board before the climax of the novel occurs. After Charly fails (spoiler, sorry) to kill Rex Nocturnus at the end of her story, does she get another chance? She survives the wreckage, but her ship the Octavia is destroyed. Does she chart out on another voyage? Give up to open a chowder shop in New Bedford? Well, no one knows. After doing some additional research, I found that this comic is an example of a “one-shot comic,” which according to Wikipedia means, “a comic book published as a single, standalone issue, with a self-contained story, and not as part of an ongoing series or miniseries.” As a new consumer in the comic book industry, I had no idea this was a form, although it makes sense. To my English-major mind, one-shot comics are like short stories– Flannery O’Connor would have probably been a fan of this style of comic. 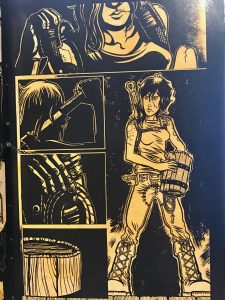 Once I discovered that “Rex Nocturnus” was a one-shot comic, I wanted to know if the creators had let anything else slip about the storyline since producing it. Searching for this question led me to their Kickstarter page, where I collected most of the other information I was seeking about the comic. Again, I’m new to studying comics. I had no idea that crowdfunding comics was a common practice. I learned that “Rex Nocturnus” had done exceeding well during its fundraising period. Over the course of twenty-five days, Boyle and Monteiro raised $6,459 when their original goal was only $1,000 over that same span of time. I’ve never supported something on Kickstarter, but it made me happy to see that so many people were indirectly preserving the story of Moby-Dick through their donations for “Rex Nocturnus,” and to see how powerful the comics community is, as attention was drawn to “Rex Nocturnus” primarily through “digital word of mouth” on discussion boards scattered throughout the internet. 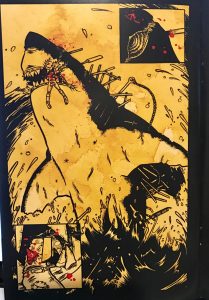 Boyle went to the Comic Books thread on Reddit and simply shared his idea and posted the link to the Kickstarter page. Quickly, support came from members of the community who celebrated the “treasure map”-like feel of the art and vowed to pledge as soon as possible. Additionally, the comic gained recognition from StashMyComics.com, where contributor Chip Reece promoted the story that would “bring a happy tear to Captain Ahab’s eye.” Other sites that featured Boyle and Monterio’s effort to fund their comic-dream included, BleedingCool.com and Boston’s Metro News even shared about the endeavor, as well.

Aside from being impressed with the wild success of “Rex Nocturnus” in its fundraising stage, I was even more curious to see if there were other manifestations of Moby-Dick in the comics industry. The first piece of debris I found was a 1946 publication from Gilberton and drawn by Louis Zansky and it is an obvious example of a Golden Age Comic.

Like “Rex Nocturnus,” the 1946 Moby-Dick comic was basically a one-shot comic, in that the 135 chapter original text is boiled down to 42 illustrated pages. While there are many avenues to explore when studying the 1946 version of Moby-Dick, two features vividly stood out to me. First, although the comic is incredibly condensed when compared to the original text, there are many lines that are directly translated over from the 1851 full text and 1946 comic. Perhaps the most iconic example would be from the height of the climax where in the original text Captain Ahab yells, “…to the last I grapple with thee; from hell’s heart I stab at thee; for hate’s sake I spit my last breath at thee!” when taking his final shot at the White Whale (Melville 426). As one can see in the excerpt from the comic, on the second to last page, Ahab’s character yells almost an identical line at the whale. There are several other instances of this direct quotation between both versions. 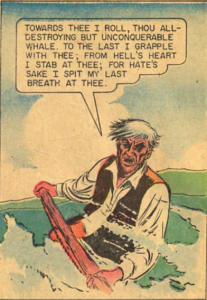 The second most vivid detail would be Ishmael’s character. For myself and many other readers, part of the mystery of reading Moby-Dick lies in interpreting Ishmael’s character. In the original text, from the moment Ishmael introduces himself, his reliability as a narrator is called into question. That iconic phrase, “Call me Ishmael” has been quoted and paraphrased since the novel was first published, but there have been many discussions about how it is quite an odd way to introduce yourself. 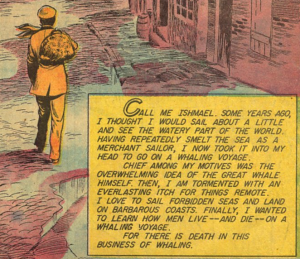 In my senior seminar, Moby-Dick, we have considered it to be a possibility that Ishmael is in fact a fugitive slave as there is no concrete evidence of his race or backstory prior to the ominous autobiography readers receive in the first chapter, “Loomings.” Michael C. Berthold in his critical essay, “Moby-Dick and the American Slave Narrative” explores how Ishmael’s “dialogical engagement with the strategies and tropes of American slave narratives” brings up interesting avenues to explore regarding Ishmael’s character in the novel and the function of several of the novel’s features, including the gams (Berthold 135). In the 1946 comic version of Moby-Dick, the artist leaves no room for questioning Ishmael’s race. Noting again that this comic is from the Golden Age, Ishmael is depicted as handsome, blonde, Caucasian male with a strong build and a great jaw line. He looks like he could be the quarterback of Nantucket’s high school football team rather than the insecure, philosophical and quirky character that Melville describes. However, when this comic is studied alongside the original text and other comic adaptations of Moby-Dick, there is room for great discussion regarding the implications of certain artistic adaptations between editions. 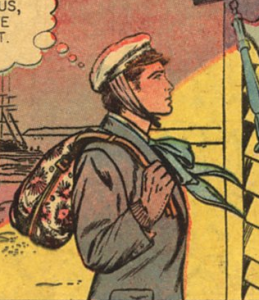 One of the greatest features of the 1946 version is the note it contains at the end:

In the article, “Finding Space and Time for the Visual in K-12 Literacy Instruction,” authors Hassett and Schieble argue for an approach to teaching literacy that values critically studying the intersection between the textual and the visual. The perfect medium? The graphic novel. In order to develop what another scholar, Christian Chun, described as “multimodal” literacies that deepen overall engagement and literacy (Chun 145). According to Chun there is a “specifical visual grammar of a graphic novel” that must be taught in order for its usage to be effective, alluding to using a resource like Scott McCloud’s Understanding Comics: The Invisible Art to cultivate a stronger foundation for students to critically study comics. While I would hesitate to spend an incredible amount of time studying the 1946 version of Moby-Dick with high school students, the 2007 Marvel edition of Moby-Dick seems to hold more promise in terms of staying true to the story line and providing a platform for individual study of the graphic novel and a comparative analysis to the original text to flourish.