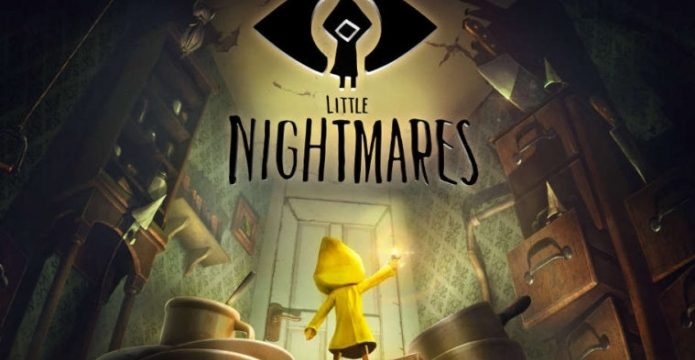 Which came first, Books or Movies?

Stories have been told as long as language has been spoken. Tales have been shown first through reenactments and then later told through written means. However, the stories told through the reenactments were continuously lost or changed, it was not till writing, that the sorties remained the same, so which came first? Well, even still, “Printing seems to have been first invented in China in the 6th century AD” while the first movie was “created by Eadweard Muybridge in 1878.” However, this set timeline no longer matters. Now, in the modern day, the same story may be told in either genre and sometimes both. Game of Thrones, A Series of Unfortunate Events, and Bridge to Terabithia were all books that were later turned into movies and television shows. The opposite has happened for shows like Avatar the Last Air Bender, Castle, and Beauty and the Beast which were later produced into books and graphic novels. Sometimes these pieces just retell the same story through a different form, such as Beauty and the Beast, in Avatar the Airbender the graphic novels continue the show series through short stories, and in Castle the books go along with the show, but are completely unrelated. 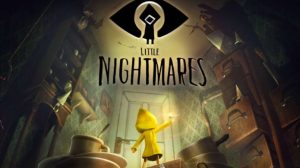 Recently, I have become both addicted and obsessed with a new game called Little Nightmares. It was released April 28th, 2017 and is puzzle based; however, it also falls under the category of adventure and horror. It, at first glance, appears to follow a simple story line. Six, the girl in the yellow coat is escaping the maw, which is filled with little gnomes, monsters, gluttonous guests, and a mysterious geisha who appears to control it all.  Six goes through many trials, and to put it kindly, goes through some of her own changes. I personally felt a little empty with the ending, but a type of empty to where I was completely satisfied, but just craving more of the twisted interactions. It wasn’t too much longer until I actually received my wish and the company released multiple downloadable contents (DLC) that allowed for the audience to continue the story through other characters. This left myself and many others with more questions then answers. It was around this time that I became shocked by the producers of Little Nightmares, for they provided the audience with even more, through a new technique, Graphic Novels.

I personally did not find much glory and redemption in the graphic novels provided. Of course, just as graphic novels have their positive traits, they 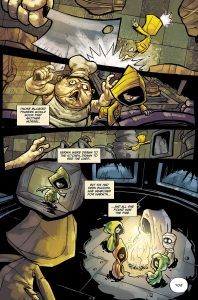 lack in other areas. In this case I do not get the same feelings I do in the video game. It is not as dark, nerve-wracking, or fear filling as the game play. However, what the comic does provide is further details in what the game did not provide, or rather left as a mystery. We get a better understanding as to how and why the children are brought onto the maw. We also get a further look into how some of the mystical pieces work, such as the power behind the mirrors upon the ship. Of course there are still questions still left within the answers we received. However, more comics are being released and we have hope that more of these questions will be answered and provided for through them. As well as some words from the producers who appear to be making more games for six and her companions.