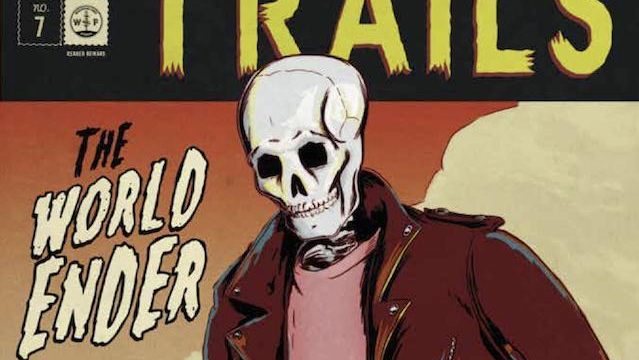 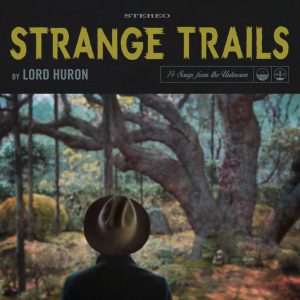 Lord Huron’s second full album, Strange Trails, was released in April of 2015, featuring 14 masterful indie-folk tracks, but the band’s founding member, Ben Schneider, had a much broader idea of what the album could be. His interest in deepening the experience of the band’s music has expanded over several medias including a comic book, several music videos, and even a choose-your-own-adventure style hotline, making Strange Trails an experience to remember.

Over the course of these 14 musical tracks, different stories unfold for those who take the time to pay attention and listen. Schneider says to Vice: Creators in an exclusive interview that the album “is an anthology of weird fiction— a collection of stories that overlap, and tangle, and sometimes collide.” Lyrical clues, such as repeated phrases and themes between songs, give listeners just enough clues to build relatively coherent narratives. For example, “Meet Me in the Woods” refers back to “Love Like Ghosts” not only by referencing the line “there ain’t language for the things I feel” with its own “there ain’t language for the things I’ve seen,” but with the overarching melodic sequence. That same sequence is also included in the last song, “The Night We Met,” which leads listeners to believe that all three of these songs are connected by a narrative. 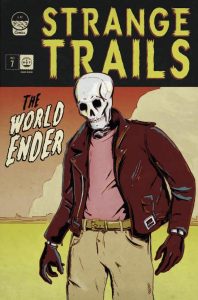 Some of these lyrical links, particularly those that this article is interested in, include references to the World Ender. In “Until the Night Turns,” the song is sung from the perspective of a man who has had a vision that the world, as he and his sweetheart know it, would soon come to an end. Towards the end of the song, we hear specifically, “When the World Ender comes, baby, don’t close your eyes.” Of course, listeners understand that “The World Ender” refers to the narrator of his namesake song, but he seems to continue to appear throughout all different medias related to Strange Trails. The extent of material connected to Strange Trails goes on even after the last, gentle ripples of water, which have been flowing since the beginning of “La Belle Fleur Sauvage,” fade at the end of “The Night We Met.” The narrative deepens with the backstory introduced by the comic book, The World Ender, written by Ben Schneider himself. 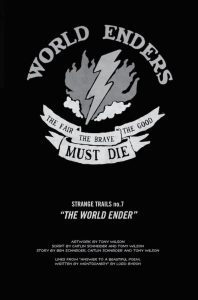 The World Ender— unsurprisingly named after “The World Ender,” which is track 7 on the album (hence Strange Trails No.7 on the comic book cover)– gives some backstory for the character narrating the song. Cobb Avery is a man, who “had a life and a place in the world;” he had a “sweet talkin’ wife and a beautiful girl” until all of that is suddenly ripped from him by the fault of a greedy salesman by the name of Winthrop. Avery’s house, with him and his family inside, collapses into a sinkhole that he might have known about if Winthrop had warned him about it before he sold Avery the plot of land. By some miracle, or perhaps curse, Avery is resurrected, and is determined to carry out his revenge as the World Ender.

Unfortunately, the comic book is no longer being made, and I could not for the life of me find any copies being sold, so the story beyond the first four pages remains a mystery. While that is true, I have no doubt that the plot from there dives further into Strange Trails lore than possible to derive from listening to the album alone.

Perhaps since we can’t read the comic book in full, we might be able to infer some of the later plot based on the storyline of “The World Ender” music video.

Differing from the comic book, the video implies that Avery (listed in the credits only as The World Ender) and his family died in a fire as opposed to a sink hole. The tragedy is still the fault of the greedy Winthrop corporation, and, maybe as a nod directly to the comic book, there is a scene in which Avery sets a gas station on fire as pictured at the bottom of page one of the comic.

At about 1:56 seconds, Avery runs into a local gang. They attack him at first, but they soon realize that Avery cannot die after he survives being stabbed in the heart with a knife. Instead, they decide to join him on his hunt for revenge, and become the World Enders. Toward the end of the video, the World Enders drive in formation on motorcycles behind Avery’s car. The audience sees decals like that in the image pictured above, the inside cover of The World Ender comic book, featuring words from a passing line in the namesake song: “The fair, and the brave, and the good must die.” This logo can be seen on most of the gang’s gear, such as jackets or vehicles.

The World Enders gang doesn’t stop there. In the music video featuring “Fool for Love,” there are plenty of Easter eggs that refer back to the other elements. In this video, the World Enders present an opportunity for a new character in the Strange Trails anthology, The Fool, to try and best his love rival. The Fool lies to The World Enders in order to prod them into fighting Big Jim, the rival. While they fight, he makes his escape. A special mention in the credits lists Johnnie Redmayne as a World Ender. This can only be the same Johnnie to which “Hurricane (Johnnie’s Theme)” is dedicated. In this same music video, at 4:34 seconds, on a bulletin board with the message “Feeling lost? 1-800-774-1372” is the number for a choose-your-own-adventure style experience. The hotline ran for some time after Strange Trails was released, but when I called recently, I was disappointed to find that the number is no longer in service. Thus, I suppose that part of the story will always be a mystery.

Strange Trails is the perfect example of a multimedia production, featuring story elements that spread from the main musical attraction of the album itself, to the comic book written by Ben Schneider as backstory for one of the most mysterious characters presented, and finally to the series of music videos that delve even deeper into the eerie world of Lord Huron. Strange Trails has to be my favorite album to date, simply because of the musical aspect alone. Without the added depth of lore contributed by the comic book and videos, however, Strange Trails would be just another album. Instead, it has become a wood, deep and dark, with exciting lore to explore.

And, what’s better– Lord Huron has confirmed the release of a new album, Vide Noir, on April 20th of this year. The Greek Theatre confirms that the new album will be “accompanied by a wealth of imagery, films and immersive experiences crafted to expand upon its narratives and themes.” Already, there’s a hotline advertised in the Vide Noir trailer that fans can call, which presents a choose-your-own-adventure type experience. I have no doubt the next album, Vide Noir, will be just as amazing and deep as the albums that have come before.

Read the first four pages of Lord Huron’s comic book, The World Ender here, along with an exclusive interview with Ben Schneider by Vice: Creators.

1 thought on “Lord Huron’s Strange Trails: The Comic Book, the Video Series, and the Album Itself”