Marvel recently released the newest trailer to the upcoming Marvel movie, Avengers: Infinity War. The highly anticipated movie has fans wanting to know what will happen in this movie but it was said in this article from Screenrant that it will not follow the story that was in the original comics. Cast members of the movie said that the plot of the movie is completely different from the comics, so the fans that are trying to read through the old comics to get an idea of what they expect from the movie, are wasting their time. The movie is set to release in late April and has appearances from many Marvel heroes. 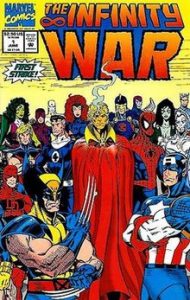 I think that it makes sense for movies that are based off of books, to stray away, slightly. You want to stay true to the origin of the story and the characters but at the same time it’s important to add your own element of surprise. Many of the movies today differ from the original comics. Most want to change things up because if someone has already read the comic, they would know all of the essential plot points of the movie and the excitement for it won’t be as high. Marvel movies have become so popular over the years and with a fan-base so big, it is easy for spoilers to be released before the movie has a chance to be released. Everyone (or almost everyone) enjoys an unsuspecting plot twist, that’s what keeps these movies exciting.