According to the Amazon bio, “The Parade” is a “timeless story told in a language that knows no country – a wordless epic that, despite its muteness, is more powerful than the written or the spoken word.”

The idea that pictures can be more powerful than text is not a new idea. “A picture is worth a thousand words” is a phrase that I think most of us have heard of before, and one that applies to this class quite nicely considering that we study graphic novels. Upon scrolling through images from “The Parade,” that phrase resonated with me more than ever.

Si Lewen drew his wordless novel just after World War II, and saw it published in the late fifties. The images within “The Parade” cover not only WWII, but also the end of WWI right up to the Korean War, and they definitely speak powerfully even 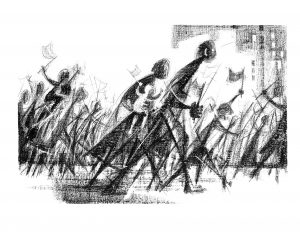 The images are all in black-and-white, are drawn in a very simplistic, stylized manner, and yet it is clear what they mean.

This emotion  behind each image is what really struck me about Si Lewen’s work, in addition to the fact that it is wordless. Each piece could easily stand alone in an art 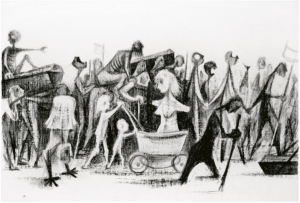 gallery and have meaning, but as they are arranged in the book – sequentially and with purpose, the meaning intensifies. The blend of history and art makes for a intense journey that probably (almost certainly) would not have been possible if this work had been a typical text-based novel.

So if there’s one thing I’ve learned from studying graphic novels this semester, it’s that pictures really can be worth a thousand words.