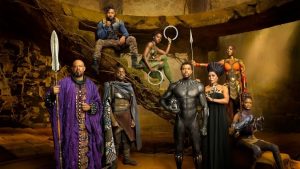 The character of black panther was introduced in 1966 by Stan Lee and Jack Kirby. The new marvel movie Black Panther was released in theaters over the weekend. In regards to representation, Black Panther has already exceeded other Marvel movies and has fans excited to see something different. These articles from Nerdist  and the Daily Northwestern explains the importance the representation in Black Panther. Even the directors and stars of the movie hope that this is the start to something amazing. They have made a film that represents what has been a missing layer in marvel and with the reactions from fans they hope that they can continue to inspire with the representation of the different character in the Marvel Cinematic Universe.

Since it’s release, the movie Black Panther has been what everyone is talking about. It is the first time for many fans that they are able to see themselves represented in a superhero movie. Fans have been arriving to theaters in full attire to see the film. People have started a black panthers challenge where they pay it forward and purchase tickets for those who want to see the movie but are unable to purchase tickets. Celebrities are even buying out viewings of the movie for students and other people. People are seemingly excited about the new representation in Marvel and bringing in $192 million in it’s opening weekend. It is expected to make $218 million after the end of the holiday weekend. With the response to the movie, it would seem inevitable that there will be more to come.

1 thought on “Representation in Comics”