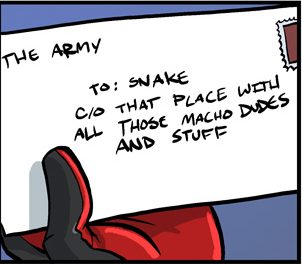 `For the past 3 years I have enjoyed the work of Kelly Turnbull or Coelasquid as she is known in cyberspace. Turnbull is a graphic artist who has worked on a variety of animated shows, such as Ugly Americans from the channel Adult Swim. She started her web comic series Manly Guys Doing Manly Things in February, 2010 on her website ThePunchlineisMachismo.com. It focuses on every “macho” character from video games, comics, to TV shows, working for a temp agency that is meant to rehabilitate them and help them acclimate to today’s society. The fact that all these different characters who are all used to be the biggest and baddest guy/girl in their universe now all exists in the same one that also has the existence of all the other game, shows, and comics that are not so “macho”. This leads to adventures such as Big Daddies from Bioshock doing daycare, the government send a letter to “Snake” and trying to figure just which Metal Gear Solid protagonist they’re talking about. 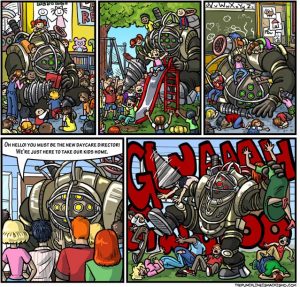 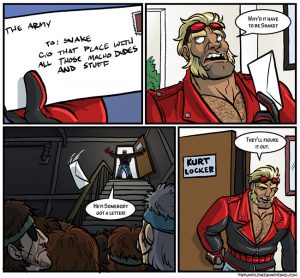 The whole comic series is a testament to the multiverse theory, in that with infinite possibility of universes, there is probably a universe somewhere in which everything from all the other universes exist simultaneously. Even though in this universe they are plagued constantly by each other’s ego’s, who is actually badder than who, and who is the best at gay chicken. Ultimately, they are able to build support groups with each other, help each other find work and still live a healthy and fulfilling life, through their friendships and the stalwart leadership of a retired, time travelling, super soldier, who just wants to do his job and spend time with his kids, named Commander Badass, or Rock Lobster, or D37-9E-B52. The use of the multiverse theory is probably best seen in the Metal Gear Solid Comic, to the right, In that there are so many different versions of Snake from the various Metal Gear Solid games, and as to why they are able to exist in the same space, much more the same basement, is a testament to the strength of the universe that it doesn’t destroy itself in a time paradox.

The ultimate goal of why Turnbull decided to go with the multiverse route is probably to satisfy her audience for her comics. As consumers of various entertainment mediums our favorite episodes, books, movies, video games, and comics, is the crossover one. Family Guy did it with The Simpsons, and Disney with Final Fantasy of all things in the game series Kingdom Hearts, plus many more. To have everything, everyone, and everywhere in all one universe is every fan boys/girls/Apache helicopters(9Gag reference) dream come true and leads to interactions between our favorite characters or have them be involved in situation we only partially day dreamed about, and makes their secret desires come true.