Have you see a shadow in your room at night and been too scared to move, but too terrified to sleep? When those shadows appear in my room, through it may seem silly, it is Princess Azula. 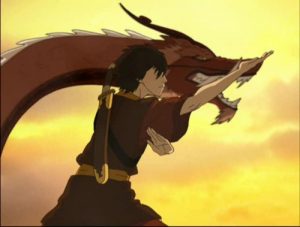 Avatar the Last Airbender will always be my favorite comic book series. Poor Zuko, a fire prince in search of his honor. But how far would he have to look? How long would his journey take? Throughout the three book comic series Prince Zuko went from being the main antagonist to joining the protagonist, Aang the last airbender, and his group of heroes. But this is not an easy journey. 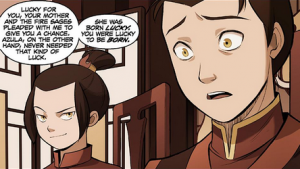 Zuko’s character development is carefully plotted as he starts out as a scared prince banished at age thirteen. The only supporterin life he had was his mother. She is not in the current story, just the flash backs throughout the comic. I will not go into herdisappearance. There are way too many fan fictions and speculations about her vanishing. Zuko’s sister, Princess Azula, is the most evil being in the entire story. She is his constant tormenter throughout his entire life.  As Zuko grows older, he is faced with many moral decisions between right and wrong. His main theme is being confronted with moral justice.

Zuko’s uncle, Iroh, is his mentor on this long journey he is going through. “You are not the man you used to be. You are stronger and wiser and freer than you ever used to be. And now you have come at the crossroads of the destiny. Its time for you to choose. Its time for you to choose good.” (Uncle Iroh) Which path will Zuko choice? Will he create his own moral destiny or let others decide his treacherous path? Princess Azula is his antagonist as he battles with his conscience. With Princess Azula as his constant reminder of the struggles he went through, Prince Zuko chooses the just and moral path he was destined to follow. Who looms in your shadows?