A descent into madness, it can be an incredibly entertaining and disturbing scene to witness depending on how you see it. It speaks to a deep down depraved part of our humanity buried and lying dormant. It can be easy to illustrate someone losing their grip, but difficult make the audience feel it.

The perception of reading about a character traveling into insanity and feeling that journey is almost directly comparable to the characters in the story themselves. Many of Edgar Allen Poe’s works explore this topic. Take ‘The Raven’ as an example. The raven pushes and drives the narrator into madness as the narrator is coerced along this journey into insanity. There is a clear give and take to this relationship as is illustrated by Poe in many of his other stories as well.

It is easy to have an audience read about a characters descent into madness, but it is a special experience when we are made to feel like we are on a journey along with the character, losing our own grip on the world around us, having our senses manipulated and distorted from what we typically expect. This is exactly what Scott Snyder and Greg Capullo are able to do to us in their Batman series, The Court of Owls. In an interview for NewsARama, Capullo discusses the maze he’s created how it wanted the reader to feel as if they were lost in a labyrinth as well.

Most people are familiar with Batman and most people are aware of what to expect from most of the stories involving him. Batman is the stoic rock that always outsmarts his enemies and doesn’t lose sight of who he is and what he stands for. The fact that Snyder and Capullo were able to take this common knowledge and perception of Batman, flip it on its head, and the make the reader feel as if they are experiencing this descent with batman is impressive. 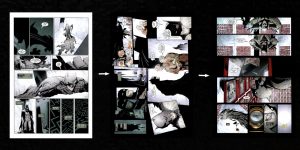 About three quarters of the way through this story, Batman is imprisoned in a labyrinth for over a week as he tries in vain to find an exit. He is forced to drink bits of water from a fountain to survive this ordeal. The water is drugged with hallucinogens. Batman is aware that the water must be drugged, but is forced to drink the bare minimum to survive as he slowly falls into madness. The combination of deprivation, mind games throughout the labyrinth, and the hallucinogen-laced water sends batman and the reader spiraling out of control. 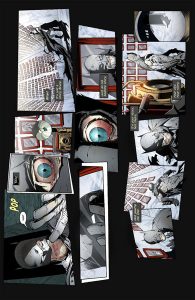 As Batman loses his mind the images become increasingly erratic and paranoid which scratches the surface of bringing us along on his journey. As the dark knight spirals out of control, Snyder and Capullo begin altering the pages and panels themselves to make us feel the insanity. The format shifts and the panels switch from the traditional top to bottom, left to right format and the whole book is turned so it is now being held like a calendar. The panels are now read from the top of the left side of the page and are read straight down through the spine until we get to the bottom of the other page. The pages continue this way as Batman hallucinates his way through Gotham, his rogues’ gallery, and even his deceased parents.

Just as we begin to get comfortable with this page and panel layout, the journey hits its climax and the format is once again altered. The pages and panels are changed so that we are now holding the book upside down and reading the right page, then the left. Our perception of how to read a book is altered as the stories madness peaks. It is disorienting to read a book in these altered ways and really gives us a feeling of spiraling into insanity along with the character. When the madness peaks and abruptly returns back to normal as the story is resolved and the page and panel format returns to normal, we really do feel a sense of climbing out of this pit of madness and returning to reality. The immersion we as a reader feel in these moments breaks the walls of the genre and leaves us floundering in the story along with the characters. 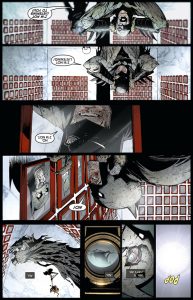 It is easy to describe madness in a story, but it is a special feeling when a reader is made feel the madness in a story. Much like the characters in this story, The Raven, and many others, we are driven into madness and pushed along this path by the creators and writers of these stories. By altering page layouts and panel layouts as they alter the traditional format we are used to, Snyder and Capullo are able to drag us into this world and experience the madness firsthand. It is a unique experience that lets us as readers dive in and travel to that deep buried part of our humanity one precarious step at a time.