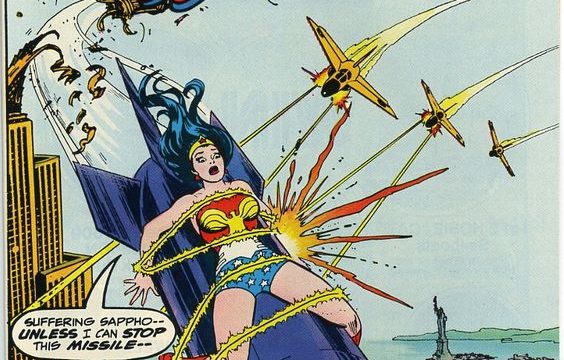 I recently (yes recently- as in two weeks ago) FINALLY watched Wonder Woman! And I LOVED it. And although I can’t imagine anyone else fitting the role as perfectly as Gal Gadot, the Wonder Woman that was brought to the big screen is not the original Wonder Woman. 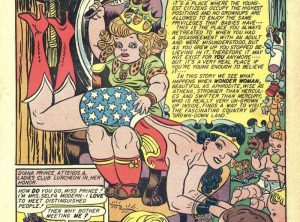 The Wonder Woman created by Marston was kinky! After Marston died the kink was removed from the Wonder Woman comics until the 1970’s when there was a revival to restore Wonder Woman to it’s original glory.  On a side note– I was looking at other recent posts, and noticed a one on controversy in comics.  And it’s not a new thing. I don’t know how accurate the film on Professor Marston was. But he was told cut down on the kink and instead increased it. 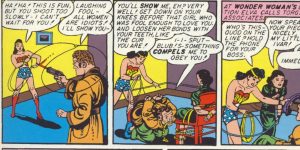 This came as a huge shock to me. For some reason I just assumed that comics weren’t kinky. I knew they dealt with graphic (hence the double-entendre name for the graphic novel) situations, as we’ve experienced in Watchmen and Fun Home. 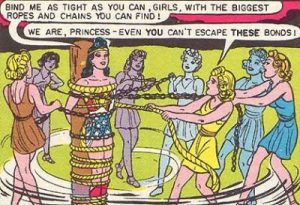 But as you can tell there is a lot of references to bondage in these early versions (which btw go for over 85,00 on ebay) of Wonder Woman. Even the cover photo for this post is insinuating a sexual vibe. 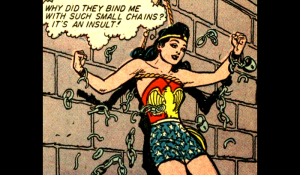 Professor William Marston is the original creator of the Wonder Woman franchise has an unusual and kind of risque life for himself. He had a wife and children, but him and his wife also had a live in mistress that they shared (keep in mind this is still considered out of the normal, so for the 1920’s-1940’s it was even more taboo) named Olive. Olive is said to be the inspiration looks wise for Wonder Woman, while his wife Elizabeth is said to be personality inspiration. Watch the trailer for the documentary below. I highly recommend to everyone.