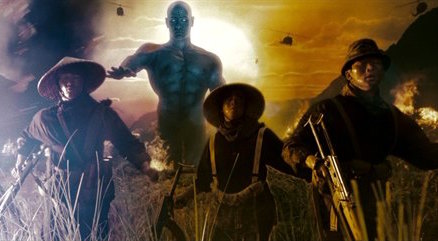 I find Zack Snyder to be a fairly misunderstood director. Audiences often deride his films, calling them visually impressive, but thematically hollow. 300, Sucker Punch, and Watchmen are the three most prominent examples used in such an argument. Yet, I would argue that all of these films have a more subversive, satirical quality to them than most might initially suspect.

With 300, Synder adapted Frank Miller’s sincerely fascist graphic novel, in a way that was simultaneously deceptively faithful while also revealing the perverseness and absurdity of those very ideals. While much of the source material is kept intact, a few additions are made that hint at the director’s true perspective. The film provides a new opening to the story, showing a pile of infant skulls while the Spartans decide whether the newborn Leonidas has the physical build to make him worthy of life. (This is an image that Snyder would later return to in Man of Steel, in his depiction of the cold, unempathetic society of Krypton) We are given a film that takes Miller’s worldview and reveals it to be what it truly is, horrifying and destructive.

Sucker Punch was marketed as a CG laden action film, featuring scantily clad women wielding machine guns and katanas. Yet the film itself presents these moments as simply fantasies, serving as a visual representation of a dance used to momentarily pacify and entertain the perverted and abusive men that hold power over them. Audiences are presented with an indictment of the action genre’s fetishization and exploitation of women under the faux feminist guise of female empowerment. As the title foreshadows, they are given an unexpected blow for desiring such spectacle.

Zack Snyder’s adaptation of Alan Moore and Dave Gibbon’s graphic novel contains much of these same elements. Watchmen was a comic book about comic books. Fittingly, Snyder has created a movie about movies. Returning to his previous themes, he uses the language of action films to explore the rhetorical power of cinema and how our desire for iconography and hero worship can distract us from unsettling truths.

Major Spoilers for Watchmen Below

The film’s thesis statement is made in its opening scene. We are shown Edward Blake, the Comedian, sitting in front of the television watching a program discussing the impending possibility of nuclear war. Eventually Blake tires of it and changes the channel. He lands on a commercial for Adrian Veidt’s perfume, Nostalgia. As Unforgettable by Nat King Cole plays, we are shown a woman sunbathing by the pool of a luxurious mansion. The commercial moves in slow motion as the woman lays her head back and a dashing, muscular man slowly approaches her. He walks across the water in an instance of Christ imagery. It seems to be a perfect world, with wonderful weather and people beautiful in the way that people in perfume commercials always are.

But this moment is interrupted as a man, who we later learn is Adrian Veidt, breaks open the door. Here the aesthetic of the perfume commercial is carried over into the reality of the film. The two men take strikes at each other. Just as in the world of the advertisement, flourishes of slow motion are used. At one point Veidt wrestles the gun from Blake’s hand and the television is unintentionally shot, leaving the punctuation of a bullet hole. We see the text, “Nostalgia by Veidt”on the screen before the image flickers away. After the set is broken, the song continues to play, making it clear that this is now part of the film’s non-diegetic soundtrack. A soothing song to a disturbing display.

This action scene overlays the two realities we saw presented in the television programs. There is the unsettling truth of impending destruction that we see in the talk show, as Vedit tries to face this issue head on, unafraid to do whatever is necessary to stop this potential future. It is a harsh, and unnerving sight, filled with blood and broken bones. And in Veidt’s step to create an ideal world, we see these horrifying actions presented with all the gloss and style of his utopia we saw in the commercial just a moment ago.

This subjective reality of Veidt through which we view the violence and brutality is one used consistently throughout the film for various characters. These acts are filtered through the cinematic flair that we might see in other action movies such as The Matrix or V for Vendetta, while still including all of the gory details to an extreme Paul Verhoeven-style degree. It is in these scenes that we are left to ask ourselves why we so eagerly come to see these movies where physical harm is inflicted upon others and why we are so enamored with the people who commit them.

This idea is most overtly displayed in scenes featuring the Comedian. As Dr. Manhattan recalls his and Comedian’s time in Vietnam, we are shown brief moments of this. We are given an up-close view of soldiers in the foreground exploding into a collection of flesh, all the while Dr. Manhattan is situated in the background, killing them from a distant, his face void of any detectable emotion.  Edward Blake is settled on the outside of a helicopter, shooting down with his pistol while a smile is plastered across his face.

The entire scene is accompanied by the song, Ride of the Valkyries; A piece of music that serves as a two-fold allusion. First and more obviously, it is a reference to Francis Ford Coppola’s Apocalypse Now. Specifically it refers to a scene where United State soldiers fire down on innocent Vietnam citizens as the song blasts from their helicopter radio. Wrapped up in the fervor of the Richard Wagner’s music, they are left indifferent to the aftermath of their destruction.

But the use of this song also refers to the music’s mention in one of the prose sections of the Watchmen graphic novel. There Hollis Mason talks about how, to him, it is the saddest song he has ever heard. Mason connects the song to a moment of misery, but not one of his own. Instead it was a moment where he, as well as the rest of the audience he was with, laughed at the suffering of another, completely indifferent to their plight.

Snyder takes the central themes of these examples while presenting these horrific acts of indifference with the ironic stylings of war propaganda. In slow motion, Comedian lights his own cigarette with a flamethrower before burning a man to death. As the music rises to a triumphant crescendo we are shown Edward Blake in our “hero shot,” standing there, tall, dark, and handsome as he smiles off into the distance. Fireworks conclude and celebrate this performance of utter remorselessness.

In a way the comic never could, Snyder allows us to see the world through the Comedian’s eyes. It lets us in on the joke. Another scene shows us Nite Owl and Comedian doing crowd control against riots. We see Comedian drop down from the Archimedes and rise from a crouch in slow-motion as the crowd backs away in awe. Once again, we are given a hero shot as we see the ruggedly handsome Edward Blake, hair blowing in the wind. It is a moment that would not seem out of place in a Spider-Man movie; A use of cinematic language that fans of the superhero sub-genre are not unfamiliar with. Yet this instance of idol-worship is broken as we are reminded of the reality of who these heroes truly are. Comedian begins to batter civilians and fire gas canisters into the crowd. “What happened to the American dream?” Nite Owls asks. And Comedian and Snyder respond with the answer, “You’re looking at it.”

More than any other scene, the alley fight scene with Dan and Laurie comments directly on the audience’s relationship with these depictions of violence. As in the graphic novel, the fight is intercut with Dr. Manhattan’s television interview. But much of the dialogue has changed, and consequently how the dialogue from the interview comments on the fight scene changes as well.

As one of the thugs, knife in hand, approaches Dan, we hear Dr. Manhattan reply to a question. “Even in a world without nuclear weapons,” he begins to respond. We see Dan dodge the jab of the knife. He twists the thug’s arm as the man cries out and drops the weapon. “There would still be danger.” Dr. Manhattan finishes.

Before returning to the interview, we are left a while to bear witness to Dan and Laurie’s actions. Dan breaks the man’s arm. His bone is now piercing through his skin as blood flows out. Another man is knocked to the ground. A third one receives a kick to the throat. We are given a moment to see what these other dangers are that Dr. Manhattan has mentioned, and it does not appear to be the attempted muggers.

The transcendent being answers another questions, this one about his abilities. “I can only see my own past, my own future. I am not omniscient.” Yet in this moment, we as the audience are granted omniscience. Unlike Dr. Manhattan, we can see the events outside of this interview, into this graphic moment with Dan and Laurie in the alleyway.

This shifted focus on the audience’s role leads to the scene’s final point. An interviewer begins to interrogate him, asking about multiple people from his past that have been diagnosed with cancer. “You’re suggesting I was the cause?” Dr. Manhattan asks.

“From where I’m standing it’s starting to look pretty conclusive.”

“Even if that’s the case, it’s irrelevant. A live human body and a deceased human body have the same number of particles. Structurally, there’s no difference.”

As we listen to Dr. Manhattan’s unsettling indifference towards human life and death, we view Laurie stab a man in the throat. She then proceeds to use his corpse as a human shield against gunfire. The connections begin to become more clear and we start to become aware of what we are watching. The scenes cuts back to the tv studio as the diegetic audience begins to murmur and squirm in discomfort, reflecting our own feelings. And we are forced to acknowledge that Dr. Manhattan’s lack of empathy isn’t that different from our own callousness to on screen violence.

We finds ourselves shocked by what we thought we initially desired from our action films. Cheering on heroes who will willingly and even gleefully kill others, as triumphant music plays in the background. As much as we might believe ourselves to hold the value of life dear to us, we will watch people being injured and murdered, simply feeling something between Dr. Manhattan’s indifference and Dan and Laurie’s fetishistic enjoyment. We tell ourselves that’s it’s all justified in the end. If it means a better world. A world full of people beautiful in the way that people in these movies always are.

Thanks for reading. Comments are appreciated.

Watchmen is available on DVD in the Simpson Library.