There are a lot of different painting programs out there ranging from the pricey-as-always-but-always-deliver Adobe products, or Smith Micro Software, to the bare-bones, free download options that many artists use to make art just as well as with more expensive programs.

There are a lot of free options that get more exposure than MediBang! Paint Pro, such as Gimp or FireAlpaca, but I believe MediBang! deserves more credit than it’s getting.

Let’s start off with what MediBang! Paint Pro was really made to be. It’s pretty simple.

MediBang! Paint Pro was originally developed with the intent of creating a platform that would make drawing manga easier for mangaka. This means the developers had to add features that would streamline the process of sketching, inking, toning, and coloring lots of pages.

One wouldn’t think that its defined purpose would make the program very different from some of the more expensive programs out there. Photoshop has manga-making capabilities, sure. What is MediBang! but a free, slightly less polished Photoshop?

As a digital artist, I have to argue my belief that MediBang!, for some of its features, is better than Photoshop. Yes, I said it. I said that a free program is, in some aspects, better than my expensive-as-hell, polished and pretty, metric ton of a favorite program.

Here are some of the MediBang! Paint Pro features that make me happy:

In Photoshop, there’s nothing to keep your lines nice, and neat, and clean, so often, even if you’re trying to be careful by moving your arm very slowly across the surface of your tablet or your mouse across the screen, you still manage to draw something that looks like a poorly straightened length of string.

Of course, there are ways to fix this in Photoshop, such as the Pen tool, which uses paths, similarly to Adobe Illustrator, but it’s not as cognitive a process as simply drawing a line and having it appear on the screen. Once you start using the Pen tool, drawing begins to feel less like drawing, and more like an adjustable connect-the-dots puzzle.

Until I found MediBang!, I’d accepted the fact that the only way to get clean lines in Photoshop was to rely on moving my hand very quickly across the tablet surface and hope for the best. It worked for a while, but it got very tedious pressing CTRL+Z over and over trying to get the result I wanted.

More on the shaky hands bit, these snap-to guides are incredibly useful for drawing in perspective. There’s no feature like this in Photoshop unless you want to draw your own lines of perspective with the Line Shape tool. That takes a lot longer, and you have to be really good at guessing where you want your lines. 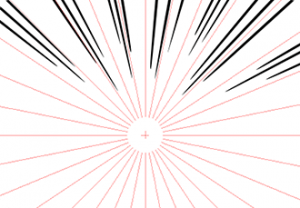 There might be a plug-in that provides perspective grids for you in Photoshop, made by some caring developer who understands the struggles of trying to eyeball correct perspective without a guide, but that’s just another thing to download. MediBang! has this feature ready to go.

This is very useful for people who would like to make frames. Sure, Photoshop has the Line Shape tool, but come on. MediBang!’s frame tool is streamlined. There’s a tutorial that shows just how easy it is to make new panels in this tutorial, here. 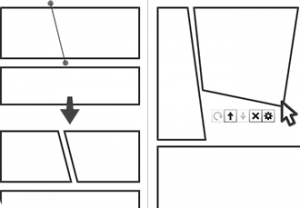 If you’re like me and have really bad handwriting, these fonts are for you. They’re easy to read, and can be used to convey all types of emotion for all genres of graphic novels. These Certified Manga Fonts™ can also be used in making American comics, or comics from anywhere across the globe that might not be considered manga. No worries.

If you’re going for that classic manga art look, these tones and backgrounds are for you. By creating a MediBang! account, you gain access to over 800 materials designed to make manga-making easier. Look through them all here.

By making an account with MediBang!, you gain access to the Cloud, which you can use to share works in progress with teammates to create collaborative art. This is perfect if one person does the sketch, another does the inking, another the color, and another adds text. Doing everything by yourself is hard work. Make other people do the work, too.

If you’re like me and you like to do your painting in Photoshop, but you prefer to use the line art features in MediBang!, the creators have thought of you. Bless them. 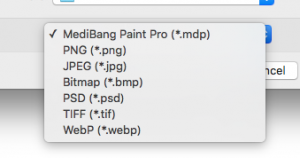 It can be very difficult to color art in Photoshop if the file has been flattened into a single layer file such as PNG or JPEG files. The fact that MediBang! has compatibility capabilities is very impressive.

You might feel like downloading a painting application to your phone is completely useless, but hear me out: so did I until I realized that instead of scrolling through the internet for hours when I’m bored, I can open an app and start working on a piece of art. A comic book page, maybe. Not only is it productive, it’s also creative. A win-win situation in which you don’t have to waste time doing nothing because you’re not at your computer to work on art.

And what’s better is that with Cloud sharing, you can save your art on your phone, share it to the Cloud, and keep working on it on your computer with MediBang! Paint Pro for PC.

Anyone who has used Photoshop before knows that it is a huge program, and it takes a lot of RAM to use. MediBang! is nice because I don’t have to worry about when my laptop will start to freeze up, because it won’t. 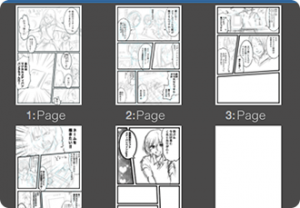 There are plenty more features MediBang! Paint Pro has to offer, including autosaves (very important for any artist) and an organizational interface that allows the user to view multiple pages of their comic/manga/creation at a time.

As a religious Photoshop user, I can honestly say that using MediBang! is just nice and easy sometimes when Photoshop can be frustrating. The developers have accomplished their goal of streamlining the artistic process, that’s for sure.

Find more tutorials and download the program at medibangpaint.com!

All images courtesy of medibangpaint.com.

1 thought on “MediBang! Paint Pro as a Comic-Making Program”