With the addition of the availability of color within comics, especially in digital ones, a new tool to exemplify the meaning of specific parts of a story has made its way into the fold of graphic novels. Originally, comics were only able to be portrayed in black and white, and it was up to only the choice of paneling, text, and illustration to get emotion and articulation across. Not to say that these tools were not effective, they still play a major role in comics today. However, once color was added, new opportunities and expressions burst their way into play. When viewing a comic, most people notice the large concentrations of color, or lack of, in a specific location. Followed by that comes intricate details being noticed, then grouping, followed by emphasized text and lastly, the structure of the comic itself. Once color was made available to comics, the order didn’t gain just one addition, but more so it was scrambled. Which color does each person view first? Which color is more important given the context? Is lack of color considered color? Which color is the best color? Does crayola really have over 500 different colors available for children who don’t know the difference between a piece of toast and a couch cushion? Find out next time on another exciting paragraph right after this small paragraph break.

Lets begin with just the overarching theme of color in most comics. Red is associated with evil, blood, fire, action and other types of concepts that would catch the reader’s attention quickly, as we are programmed to notice bright colors before others. Blue on the other hand, is a calming color that is most often associated with good, water, gentle and peaceful places. By simply changing a black and white comic to color, the way it is portrayed is shifted immensely. Take for example this side by side comic. 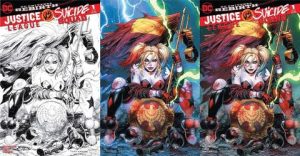 Its blurry, I know. Don’t yell at me. I couldn’t find a higher resolution picture and thats not my fault. Go blame google or something. The reason I chose this though, is that in the first comic cover, the artwork is in black and white. Because of this, your eyes probably jumped to the darker parts of the cover first. Unless you’re a man. You can’t really see the lightning in the first cover, and the details of the uniform, shield, and flag are almost non existent when contrasted with the rest of what’s going on. However, once color is added, where your eyes go to first is drastically changed. First and foremost, the red is noticed before the blue, and anything painted on a red background sticks out as well. The outfit of the woman becomes much more eye grabbing, as if it wasn’t already. Lots of objects that were there before come into view and overall, there is a fiercer emotion that comes with the colored versions over the black and white ones. If you were to look at these three covers for the first time, which one would you choose? Definitely not the black and white one. Unless you’re old or weird or something. This is the first of three vital changes color brings to the field.

Everyone likes Garfield right? I don’t. But I’m using this example anyway. Lack of color isn’t all bad as I made it seem in the previous paragraph. In some cases, it actually brings just as much emotion to a comic as color does. In order for that to happen, it must be used correctly. And notice how I say lack of color, and not black and white. In this comic, with Garfield, the ginger lasagna cat, only the newspaper has color. That is of course until pasta feline opens up the news

paper and releases the color, or emotion, unto the rest of his surroundings. This type of color usage opens up a realm of possibilities for expressing importance in certain objects of a story, and in this case, has shown the reader that every day, including Mondays, sucks until linguine kitty gets to open the paper and see his own smug face moping back at him. Along with the obvious emotion of the bright colors being associated with his smile, cavatappi cat would be viewed as less happy if their wasn’t color in this comic, and due to color cues, we know that same happiness came from the paper. This SEGWAYS (VROOM VROOM) us into the last great addition that color brings to comics. Blushing.

YES I SAID BLUSHING. BECAUSE WHAT’S AN ANIME WAIFU IF SHE DOESN’T BLUSH IN THE COMICS TO LET YOU KNOW SHE LOVES YOU. 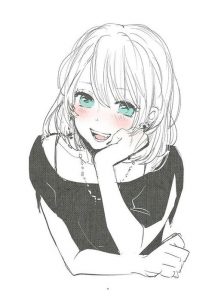 If I showed you this picture, without any color, how would you know she is blushing. How would you know she loves you? Well you wouldn’t because she doesn’t because she loves me so too bad for you. All jokes aside, not really, the point I’m trying to make is that with the addition of just one color (ignore the eyes) an entire emotion is tacked on to this image. And that goes for just about any comic. The subtleness that color can add in terms of emotion is astounding really and if you were to pick up any comic you have laying around at your grandmas house while she’s making you cookies or some other sweet that you don’t need, you’d see exactly what I’m talking about.

Here’s a link to how color is used to do professional stuff from a professional lady who makes comics. Because I’m neither of those.