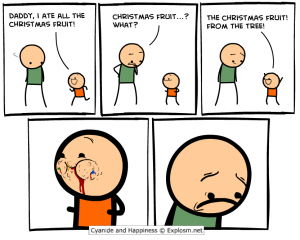 Most people familiar with internet based comics and memes are sure to have at least heard of Cyanide and Happiness comics. However, it’s not common knowledge how this now 53 million dollar enterprise came to be. In short, it all started with three dudes drawing stick figures and jokes. Kris Wilson, Bob DenBleyker, and Dave McElfatrick all started their journey to internet fame as nothing more than amateur artists submitting their drawings to a website called newgrounds.com. Mind you, none of them had ever met in person as one lived in Texas, the other Ireland, and the third Wyoming; they just simply happened to all be posters in the same comic forum online. Bob and Dave eventually began collaborating together, and branched out to create 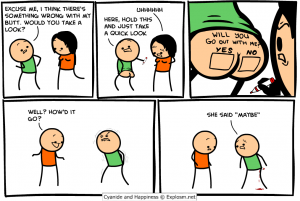 their own respective websites: sticksuicide.com and stickwars.co.uk which were both met with positive reviews. Kris, 15 at the time, while sick with strep throat decided to create his own website as well called Comicazi, but was shot down by several publishers due to his dark material…which we have now all come to find hilarious. Kris altered the name of his comic to Cyanide and Happiness and sent it out to creators he admired, Dave and Bob among them. His work caught their attention and before long they started sending comics back and forth, agreeing to collaborate and create a combined website for their work; thus, explosm.com was born! Initially they wanted to go with the name www.BestWhileHigh.com but Rob decided, and I quote, “nah, that name is stupid.”  The finished product hit the web December 9th 2014, and the first actual Cyanide and Happiness comic aired January 26th 2005. Three years later, the comedic trinity was invited to the San Diego Comic Convention, which was quite a huge deal, as it marked the first time that our boys all met in person. Since that day, a Cyanide and Happiness comic has been posted daily without fail. Currently, Cyanide & Happiness has over 5 million YouTube subscribers, 4,000 comics, 11 million Facebook subscribers, and five books published. It’s even won a Streamy award for best animated channel (YouTube channel). In 2010, a few Hollywood producers noticed Cyanide and Happiness animated shorts and proposed a deal to buy the entire franchise; the boys said no. In 2013, a kickstarter was started so they could launch a show themselves. They asked for $250,000. They received $770,000. To this day, an animated short is produced on their show weekly. In 2014, Matt stepped down and left the C&H team to pursue more personal opportunities, but Kris and Dave continue to post new comics daily. You can check them out here!