If you look back at comic books at their origin, you’d notice quite a couple of common characteristics. They usually involved a superhero, or some sort of protagonist with superhuman abilities and that said protagonist would always come out on top…. after a thousand cliffhangers of course. Despite all of the comics of that time having these same characteristics and surprisingly having very similar stories aside from the different fill in the blank “man” names, each one conveyed a uniqueness and allowed for a multitude of fan bases and fan made comics arriving in later days. Alongside the stereotypical superhero comics, there was also a rise of the sunday paper comics, or some comic of the same ilk. The majority of these featured comedy with recurring characters that could be read chronologically or individually. Regardless of what you chose, the humor was not lost on you. While those very same hard copy comics remain alive today, both of them have lost the reigning title of comic to, wording it nicely, is internet comics.

Now don’t get me wrong, I’m not gonna use this article to bash internet comics, well not all of them. There are several that I thoroughly enjoy and none more than Cyanide and Happiness. Let’s take an example comic posted to their website (explosm.net).

You’ll notice not only the shortness of the comic, but the baseness of each of the characters. It is physically impossible for anyone to know if a character recurs in any of the comics made by explosm because they all share the same face and the only thing that ever changes is the gender or the color of their shirt. If you look at it for its comic value though, internet comics may not seem so bad. It made me chuckle, if it didn’t make you chuckle then you don’t have a sense of humor and I suggest you see a doctor. This one to be exact. 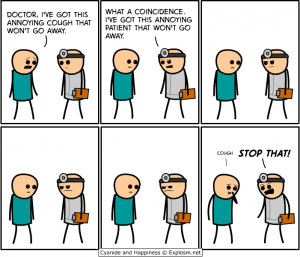 What’s great about this series of comics is the simplicity and the crude humor that follows it. I think that as time moves forward, entertainment changes drastically, and that can be said for anything, but a weird split happens with comics. When it comes to the action and adventure types of comics, when someone is looking for a thrill with a hero they can get behind, nothing ever changes. Not then, and definitely not now. Between the fanboys of Marvel and the fangirls of DC, and yes I said fangirls on purpose, there is never really a change in their comic line, just a new location and a new beatable villian who has some weird backstory. Comedy however changes. Always, and forever. Back in the day Garfield was considered funny. An orange cat who hates Mondays. HAHA. Garfield? More like garfooled. (Here’s the reference for that if you want to be cool:

Now I’m sure if I was alive back in the day when dinosaurs walked the earth, I’d think that an orange cat who likes lasagna would be funny too. But I wasn’t and I don’t. What really tickles my tonsils is a bit of crudeness and some obscurity as to why something is funny. Cyanide and Happiness hits home with filling my laugh tummy with some giggle steak. Here’s another comic that takes the cake for me. 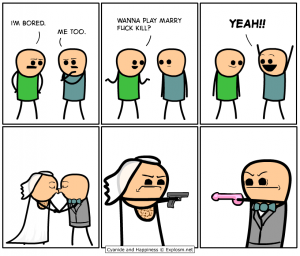 Would this ever be allowed in a public newspaper? No. And thats another reason why Internet Comics are so unique. You can get away with so much and appeal to an audience that normally doesn’t have material to make them laugh. This comic strip includes a game played by kids of my generation, along with the obscurity of where did the dress, gun and toy come from, and the crudness found within the objects being held. Really what more can you ask for? Calvin and Hobbes? Just kidding that’s my favorite comic ever please don’t make fun of it.

2 thoughts on “The Depravity of Internet Based Comics”