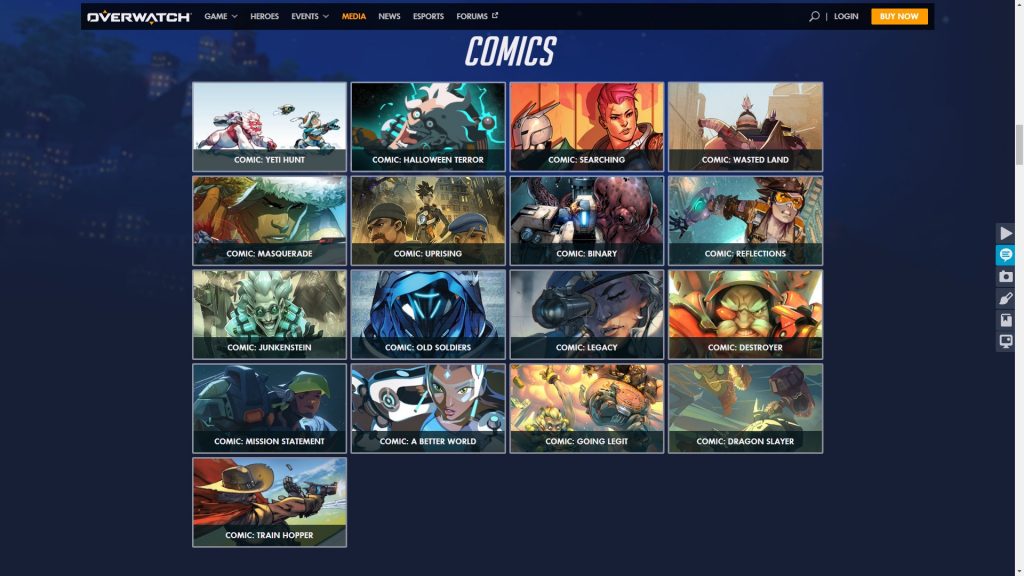 Overwatch is a video game released by Blizzard Entertainment on the PC, Xbox One, and PS4 about two years ago.  It mainly focuses on player versus player (PvP) game modes, but occasionally has player versus environment (PvE) game modes for seasonal events like Halloween.  Because of this, there is no “story mode” and people can be left wondering what their favorite character is like or what their history is outside of the game.  Blizzard has released and continues releasing videos about histories, new characters, and origin stories, but they also create web comics to help give their fans the stories that they crave.

The game is set in the future so there are robots and other technological advances that make basically anything possible from teleporters to rocket powered hammers.

Each character has a unique set of abilities and fall into one of four classes: Offense, Defense, Tank, or Support.  A team is comprised of six players and should be balanced based off of what map and objective the team has.

As of right now, there are 27 heroes a player can choose from, each with their own story and history. 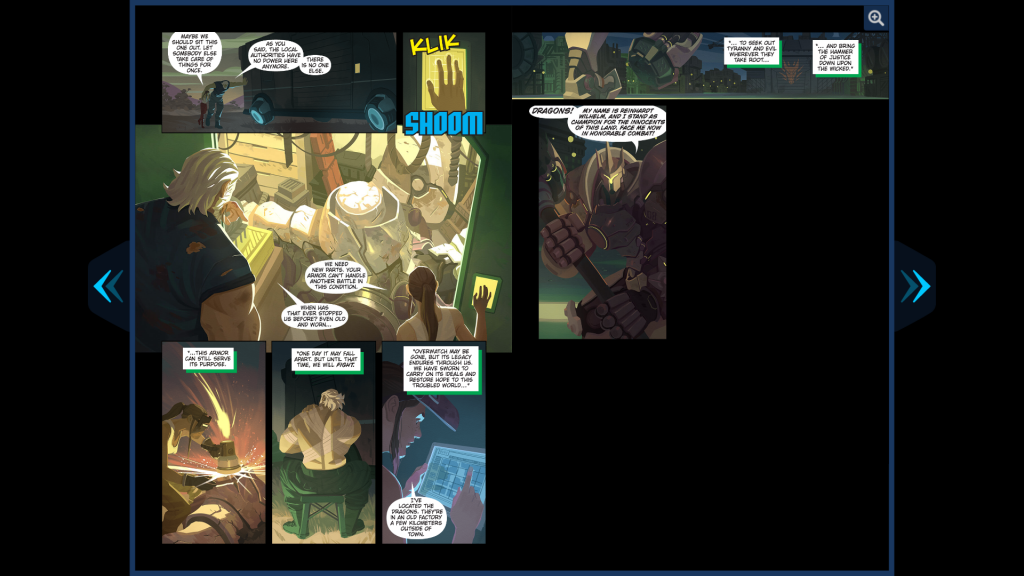 The comics are all kept in an archive on Blizzard’s website.  They are generally pretty short reads at about 10 pages or so each.  They do not do much with online capabilities like NAWLZ or some of the other more interactive web comics we looked at in class do, but are set up so that the reader can bring up one panel at a time while they are reading it.  Along with the online version, Blizzard has also begun putting them into printed anthologies; as of right now, only the first anthology is available to purchase.

The Art (and Artists and Writers) 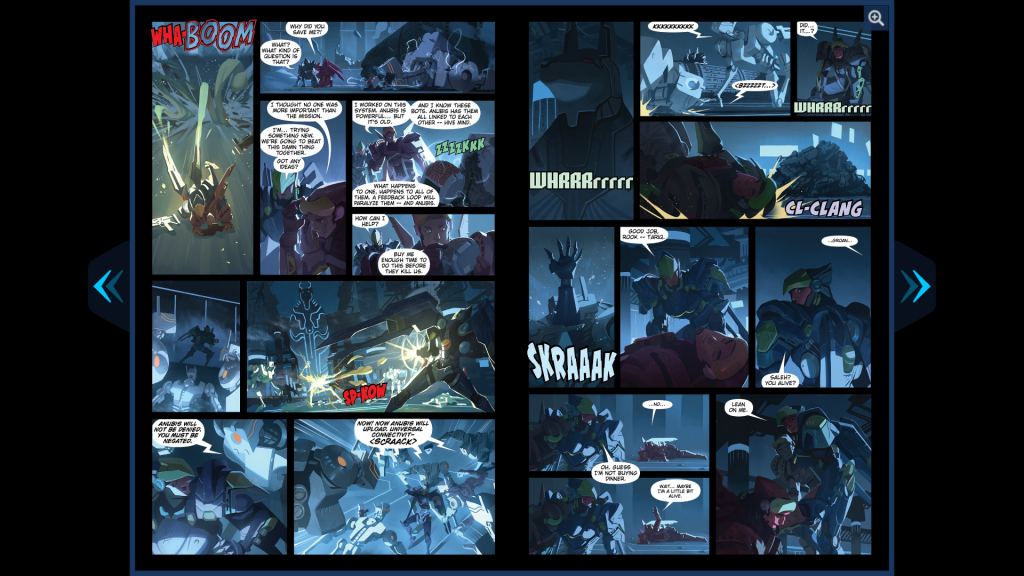 Blizzard has several artists and writers who work on the comics. The writers, like Michael Chu, work directly for Blizzard whereas the artists, like Gray Shuko, are freelance artists who are commissioned by Blizzard to illustrate their lore.  These artists all have their own unique styles that they bring to the comics, but all of them are beautiful.  Regardless of their style, it is always concrete who each character is and uniform throughout that specific comic so that the artists’ styles do not blend together within a story (see my first blog post for an example where this went horribly wrong).  The title page of each comic gives the reader an idea of what the rest of the comic looks like and is always very well done (see featured image for an example).

Other Neat Things the Comics Do 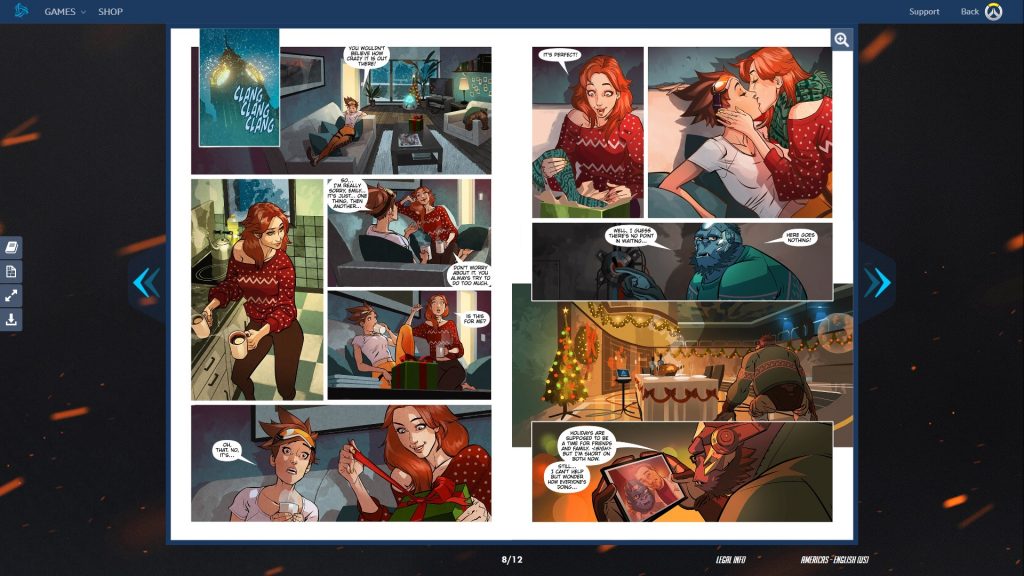 Aside from giving the reader a fun and exciting story about their favorite characters, the comics also have a few other properties.  Blizzard is a big advocate for going outside the norm with many heroes.  For example, Tracer, the poster child of Overwatch, is a part of the LGBTQ community which is not seen very often in media, comics or otherwise.  They also have many other strong female and minority characters; Pharah (pictured in the comic section above) is a powerful leader of a police force in Egypt, Symmetra is Indian and confirmed to be on the Autistic spectrum, but is demonstrated as a scientific genius.  Blizzard does a fantastic job in introducing these characters and their traits without it seeming “forced” as I have seen many other pieces of media do.  They are recognized for their powerful traits and never shamed because they are what society would consider “different.”

Aside from being progressive, Blizzard also puts little hints and surprises in some of their comics.  The newest character, Brigitte, was originally featured in Reinhardt’s comic as his squire months before she was announced as a playable character.

The Overwatch comics are small in volume and short in length, but provide fans of the IP great stories about their favorite characters and events in the game that are not given anywhere else (aside from small quips and hints that characters mention in-game).

The art is beautifully drawn and each artist has their own style to give a unique flavor to each comic.

Though the online format is not necessary, nor does it grant the reader much interactivity beyond single panel loading, I think it is fantastic that Blizzard publishes them free of charge on their website so fans can get the story behind the game that they already paid for.

Blizzard’s ability to incorporate so many diverse characters from different genders, nationalities, and sexual orientations is refreshing to say the least.  I think they are going the right way about it by not alienating these characters and just having them be treated normally as all people should be.  The only real “racism” in the game is against the Omnics who are sentient robots, but that is a whole different ball game in the lore.

They also pop in little Easter eggs that are reveled later on which makes me (and other fans) read and speculate if a character may be introduced later on in the series or something of that nature.

I say, “keep up the good work, Blizzard!” I just wish they would release more of these comics to read in the mean time of waiting for a new character!